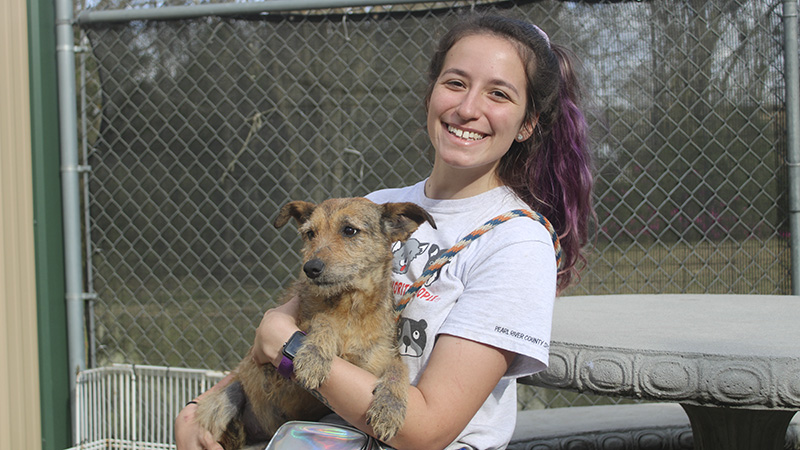 PRC SPCA kennel attendant Lauren Dwyer holds Saasy, one of the 22 dogs recently surrendered to the shelter. Sassy is a 5-year-old terrier mix, that is heart-worm negative and ready for adoption. Photo by David Thornton Jr.

Pearl River County SCPA has recently taken in a large amount of dogs as part of an attempt to place them in better housing, leading to a need at the shelter for community assistance.

On Feb. 4th the SPCA took in 22 dogs from a home in the Picayune area because they were living in deplorable conditions, said spokesperson Maria Diamond.

Since then the shelter has raised $1,454 for the medical care of those dogs.

The shelter is currently caring for most of those dogs, eight of which are puppies, while some have been adopted out. The 22 dogs are mostly small breeds with negative heartworm tests.

“We’re working with them all to get them socialized well,” said Diamond.

The dogs were relinquished to the shelter by their previous owner, she said. Shelter volunteers said the dogs were turned over by the owner because the owner just couldn’t take care of them in their current position.

In other shelter news, the PRC SCPA will hold a Double Your Donation Drive where the hope is to raise $10,000 to be used to help reduce shelter over population by providing affordable spay or neuter surgeries to pets in Pearl River County. According to previous coverage, this fundraiser is the same  one funded by a $10,000 promise by an anonymous generous benefactor. So far, that efforts has raised $1,440 on Facebook. Community members can donate to the effort via the PRC-SPCA Facebook page or donations can be brought to the shelter. The fundraiser will end on March 31.

This weekend and next month, shelter staff and volunteers will host two drive-thru wellness clinics. The first will be at Snyder Park in Picayune this Sunday from 1-3 p.m. A second clinic will be at the Pearl River County Fairgrounds located on Rodeo Street in Poplarville on Sunday March 20 from 1-3 p.m. The clinics will provide free vaccines for dogs and cats and PRC-SPCA Spay/Neuter coupons and microchips will also be available for sale.