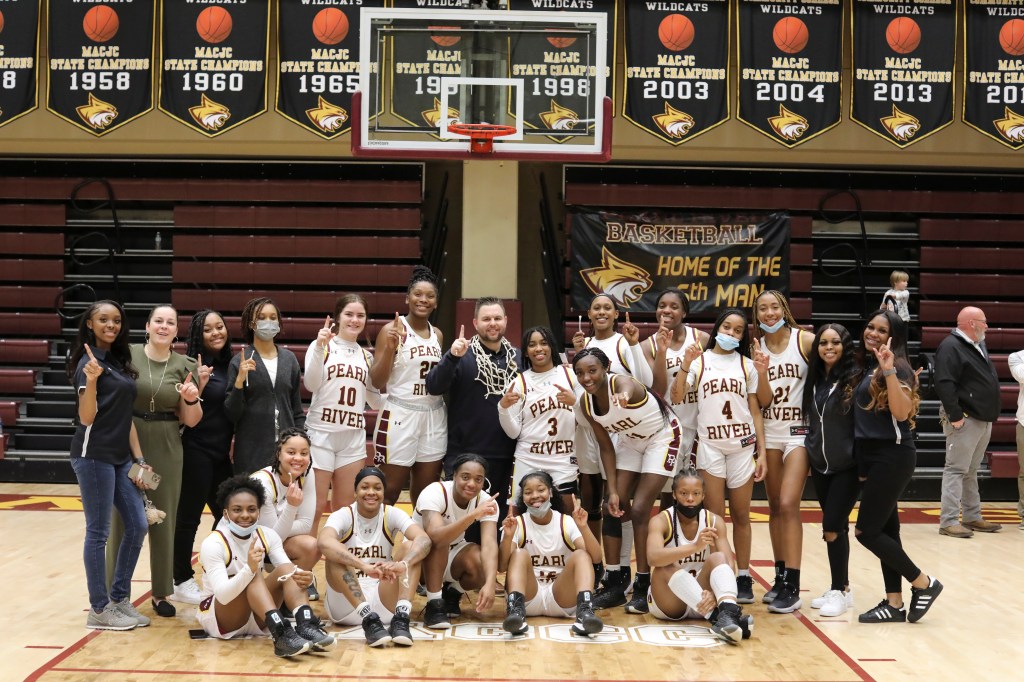 POPLARVILLE, Miss. — It’s been a long time coming for Pearl River women’s basketball head coach Scotty Fletcher and his Wildcats, but Thursday night saw them claim the regular season MACCC Championship for the first time since 1994. The Wildcats throttled the visiting Northeast Tigers 83-42 to earn the honor.
“I didn’t tell the girls until our shootaround that we had a chance to make history tonight because I didn’t want them to feel pressured,” Fletcher said. “From where we were seven years ago to be able to be conference champions speaks volumes about the girls and assistant coaches. I’ve been extremely blessed with great players who have been bought in since they got here.
“We get the chance to hang a banner, get a gold ball and put a ring on our finger.
That’s incredible and to celebrate it with these awesome girls means a lot.”
FIRST QUARTER
Pearl River (19-3 overall; 12-1 MACCC) was off and running to start the night, immediately hitting from downtown. Otashae Burrage (Carthage; Leake County) caught a pass at the top of the key and promptly knocked down the shot to make the score 3-0.
Northeast (4-16; 2-9) answered with a 3-pointer of its own, but it was all Wildcats from there.
After PRCC picked up a point from the free-throw line, Halle Traylor (Tupelo) caught fire from beyond the arc, knocking down three consecutive 3-pointers to make the score 13-3.
Moments later, Pearl River added on four more points thanks to Brandy Scott (Hammond, La.) Scott first caught a pass from Jaliscia Florence (Tupelo) and spun around a defender to lay it up and in. She then followed that up by driving into the lane with a euro-step to get the layup and make the score 17-3.
Pearl River found itself up 21-6 a few minutes later as Marcavia Shavers (Biloxi) jumped high above the Tiger defender for an offensive rebound and swiftly finished with a putback.
Pearl River carried a 25-8 lead into the second quarter.
SECOND QUARTER
The Wildcats opened the second by taking a 28-10 lead when Burrage pump-faked to draw a defender’s reaction before stepping to the side and drilling a 3-pointer
A while later, Alesha Temple (Oak Grove) drew a foul after fighting through traffic and making a contact layup. Her and-one attempt was good to make the score 37-14.
Pearl River didn’t let up, eventually going ahead 46-23 just before halftime.
Tristen Washington (Gonzales, La.; East Ascension) sent the Wildcats to the break with a bang.
The Northwestern State transfer received a full-court pass as time was expiring and nailed a 3-point shot to make the score 49-23.
THIRD QUARTER
The Wildcats came out of the break exactly the same way that they started the game as Burrage hit a 3-pointer to extend the lead to 52-24.
Later in the quarter, Washington drove the lane forcing the Tigers to close in on her. She then dished out to a wide-open Amaijah Smith (Gulfport) who knocked down a 3-pointer to make the score 61-28.
PRCC continued to pick up points at a rapid pace, ending the quarter on top 69-30.
FOURTH QUARTER
The final quarter of the night played out just like the others, with Pearl River dominating until the final buzzer.
Late in the quarter, Temple fought for another hard layup to make the score 79-35.
Gabby Collier (Brandon) put the game to a close by hitting from way beyond the arc to make the score 82-38.
The Tigers would grab two more baskets, but Pearl River ended the night with a convincing 82-42 victory.
STATISTICALLY SPEAKING
Burrage and Traylor tied for the team lead in points with 12.
“This team has a lot of depth,” Burrage said. “When the starters are out and the bench players are in there is not a drop-off. That’s what I love about this team.”
Washington and Shavers finished the night second on the team with 11 points. Nichols rounded out those in double figures with 10.
Shavers led the team in rebounding, hauling in eight. Anessa Dussette (Houston, Tx; Manvel) and Nichols each had six.
Smith was finding all of the right passes on the night, finishing with seven assists.
NEXT UP
Pearl River returns to action next Thursday as they hit the road for their final road contest of the season against Coahoma.
The game is set to tip off at 6 p.m. and will be livestreamed at CoahomaSports.com/watch.
For the latest on Pearl River Community College athletics, follow us on Twitter (@PRCCAthletics) and Facebook (PRCCAthletics).