No. 4 Pearl River plates 25 in sweep of Coastal Alabama – South 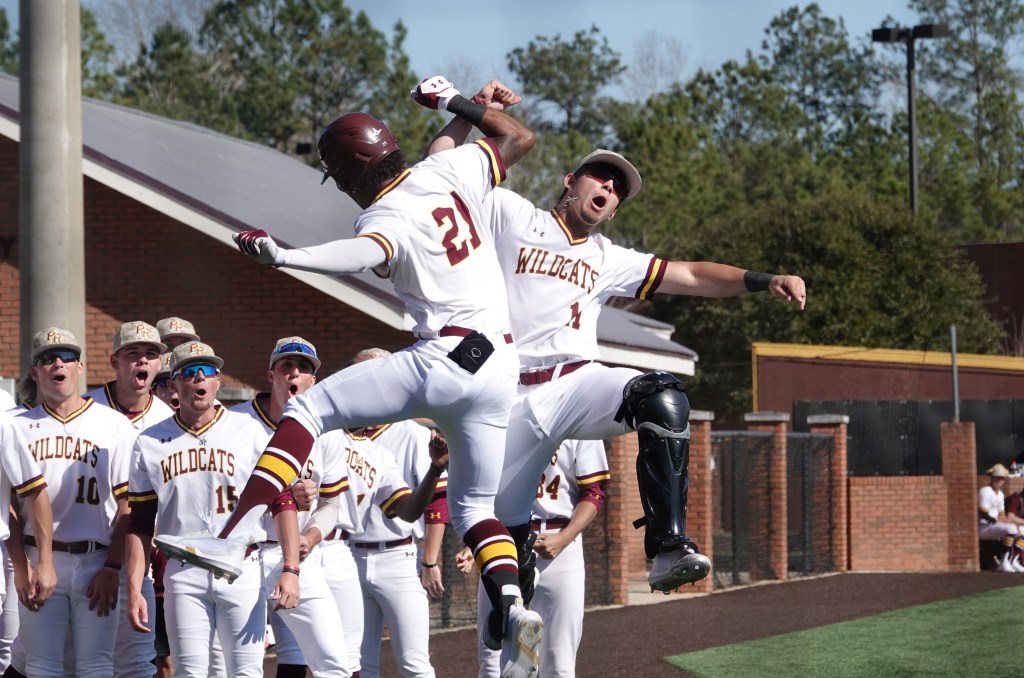 Ian Montz (Lafayette; Acadiana) celebrates with teammate Triston Hickman (Wiggins; Stone) after hitting the first homer of his collegiate career. The freshman finished the doubleheader 4-for-6 at the plate with one homer, one triple, four RBIs and three stolen bases. (PRCC Athletics)

POPLARVILLE, Miss. — The No. 4 Pearl River baseball team’s bats were hot Friday night inside of Dub Herring Park as the Wildcats scored 25 runs in a doubleheader sweep of Coastal Alabama – South. Pearl River won the first game of the day 10-4 before earning a 15-5 run-rule victory in game two.

“We got two wins today and we’re thankful for those,” Pearl River coach Michael Avalon said. “Obviously, we can do some things better, but we can look at the good and the bad. That’s what we will do. The good thing is that we don’t play again until next Sunday, so we have time to make adjustments. A lot of credit to them, they jumped on us early in both games.”

GAME ONE
Coastal Alabama – South (2-2 overall) was on fire to open the game grabbing back-to-back singles and a walk. Pearl River (4-0) tallied a strikeout, but a sacrifice fly coupled with a single put the Sun Chiefs ahead, 2-0.

The Wildcats went quietly in their first chances at the plate but made up for it in the bottom half of the second inning. D.K. Donaldson (Gulfport; West Harrison) and Ryan Burt (Columbus; New Hope) were each plunked by a pitch to put them aboard. Preston Soper (Madison; Germantown) then stepped up to the plate and crushed a 3-run homer over the centerfield wall to put the Wildcats up 3-2. The homer was the first of his collegiate career.

After Tate Parker‘s (Gulfport; West Harrison) flyball into right field was dropped, Ian Montz (Lafayette; Acadiana) promptly made CAS pay, crushing his first homer in the maroon-and-gold to put the Wildcats on top, 5-2.

Coastal Alabama – South made the score 5-3 in the fourth inning on an RBI single.

Taylor Woodcock (Pass Christian; West Harrison) opened the bottom of the fourth with a double and Soper reached base after being hit by a pitch. After the pair advanced a base due to a passed ball, Gabe Broadus (Wilmer, Ala.; Faith Academy) brought home Woodcock with a long sacrifice fly to right field to make the score 6-3.

John Griffin Bell (Mobile, Ala.; Faith Academy) then drew a five-pitch walk to set up a Tate Parker (Gulfport; West Harrison) moonshot 3-run home run that made the score 9-3.

Harper Jordan (Hattiesburg; Presbyterian Christian) took over on the mound in the fifth inning and immediately forced a groundout. He got the next batter to chop the ball into the ground, but a Pearl River miscue allowed the runner to reach. Jordan then forced a third consecutive ground ball that Bell fielded up the middle, tagged second base, and fired to first base for the double play.

CAS scored a run on an error in the sixth inning to make the score 9-4. Pearl River had a chance to answer back in the bottom half of the inning as it loaded the bases with two outs, but the CAS pitcher induced a fly out to left field to end the threat.

PRCC again loaded the bases in the seventh inning but had no luck bringing home any runners.

Pearl River added on its 10th run of the game in the eighth inning to make the score 10-4. Logan Walters (Petal) saw eight pitches in his at-bat before lining a double down the right field line. The redshirt freshman eventually came around to score on a wild pitch.

Blake Hooks (Petal) made his Pearl River debut in the top of the ninth inning and made quick work of the Sun Chiefs. The right-hander grabbed back-to-back strikeouts before getting the final batter to ground out to finish off the 10-4 victory.

Sam Hill (Soso; West Jones) made his first start of the 2022 campaign and pitched four innings with four strikeouts against two runs, five hits and one walk. Jordan pitched two fantastic innings in relief, allowing no hits and just one walk. Mason Smith (Laurel; Northeast Jones) pitched the seventh inning, striking out one and giving up one hit. Dawson Strong(Bay St. Louis; St. Stanislaus) and Hooks each pitched one inning in relief with two strikeouts.

GAME TWO
The Sun Chiefs once again jumped on the Wildcats in the second game of the night, plating three runs in the first inning.

The rocky start to the game didn’t bother Pearl River as it answered with four runs of its own in the bottom half of the inning. Broadus and Bell opened the inning with two straight singles before Parker laced a ball between the third baseman and shortstop to bring Broadus home. A batter later Donaldson hit a deep fly ball to centerfield for a sacrifice fly. Montz then stepped into the box and ripped the second pitch that he saw right back up the middle to tie the game at 3-3. Triston Hickman (Wiggins; Stone) then singled after the CAS outfielder lost his footing, giving Pearl River a 4-3 lead.

The Sun Chiefs went down quietly in the top of the second then Pearl River began to pour it on in the bottom half, scoring seven runs.
The inning began with singles by Bell and Parker who then moved up a base each after a flyout. A Donaldson sacrifice fly brought home Bell to make the score 5-3. After Perry and Montz walked to load the bases, Hickman saw eight pitches before walking to bring home a run and make the score 6-3. Walters then doubled to bring home two more runners and advanced to third base on the throw. Six pitches later, he scored on a wild pitch to make the score 10-3. Broadus drew a walk and swiped second base on the second pitch. He then scored on an error by the shortstop to make the Wildcat lead 11-3.

The Sun Chiefs answered with two runs in the third inning to cut the Wildcat lead to 11-5.

The bottom of the third began with Matt Mercer (Richton; Petal) singling and Donaldson reaching on an error that brought Mercer home to make the score 12-5. Soon after, Soper drove another run home with a single and Walters tallied an RBI on a fielder’s choice to put the Wildcats on top 14-5.

Cole Tolbert (Laurel; West Jones) took over on the mound in the fourth inning and was greeted by a CAS double. The freshman then struck out the next batter, but he reached on a dropped third strike. The traffic on the bases didn’t bother Tolbert as he forced a pop-up and struck out two batters.

A groundout opened the fourth inning and then Mercer reached base after being hit on the sixth pitch of the at-bat. A batter later, Montz tripled off the centerfield wall to drive Mercer home and make the score 15-5.

Landen Payne (Ocean Springs; St. Martin) took over in the fifth inning and promptly sent the Sun Chiefs back to the dugout with three straight groundouts, giving Pearl River a 15-5 run-rule victory in the process.

Turner Swistak (Hattiesburg; Oak Grove) earned the start and pitched two innings. The Tennessee signee allowed three runs, but they were all unearned. He also tallied four strikeouts. Jordan Belsome (Poplarville) pitched 2/3 of an inning, allowing two runs, two hits and three walks with two strikeouts. Parker Harrington (Hattiesburg; Oak Grove) struck out the only batter that he faced. Tolbert pitched a solid inning, allowing one hit while striking out three. Payne pitched a perfect inning to end the night.

Bell, Parker and Montz each collected two hits on the night. Donaldson and Montz each had two RBIs. On the day, Pearl River was hit by a pitch 15 times.

UP NEXT
Pearl River returns to the field Sunday, Feb. 20 against Southwestern Iowa. The game is set to be played at East Central Community College.