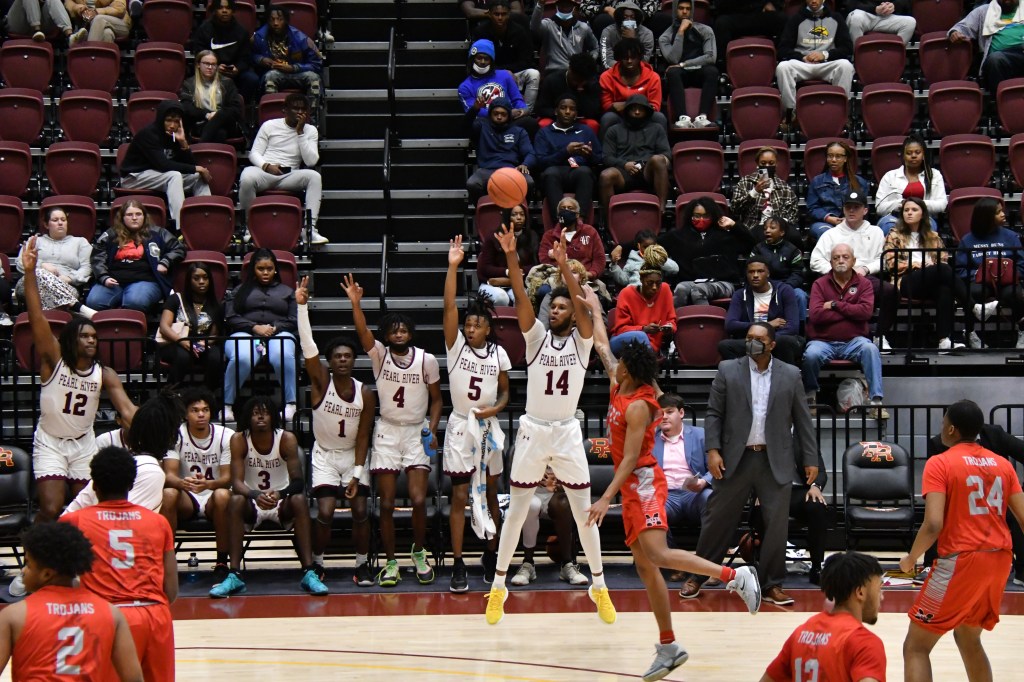 POPLARVILLE, Miss. — The No. 22 Pearl River men’s basketball team hit the ground running Monday night, using a barrage from beyond the arc to dominate Mississippi Delta 86-46.

“It makes it fun to coach them when you have an unselfish team like this,” head coach Chris Oney said. “I told the guys at halftime that if we find the second and third passes, we will get a lot of great open looks. Luckily, they made a few.”

FIRST HALF
Pearl River (17-2 overall; 12-0 MACCC) got things going in a hurry through an Earl Smith, Jr (Jackson; Lanier) 3-pointer off a beautiful pass from Dylan Brumfield (Hattiesburg; Oak Grove) putting them ahead 3-0.

A few moments late, the Trojans tried to inbound the ball but Cameron Brown (Hattiesburg) caught them by surprise, picking off the pass and slamming it home to increase the lead to 10-2.

Shortly after, The Wildcats had an impressive stand on defense and drove up the court where Brumfield threw a dime to Jaronn Wilkens (Biloxi) who fought through traffic for the contested layup making the score 12-2.

The Wildcat run continued as Gross nailed his second 3-pointer of the night from way beyond the arc, blowing things open 15-2.

Pearl River was not done yet as the run continued with a J.D. Allen (Brookhaven; Wesson) 3-pointer, making the score 18-2.

After a Jaronn Wilkens putback pushed the score to 20-2, Earl Smith caught a pass at the top of the key and took it himself knifing through traffic for the hard-fought layup, increasing the lead 22-2.

The run concluded with Brown and Noodle both hitting 3-pointers.

The Wildcats continued to pour it on eventually leading 39-16.

Late into the second half, Jariyon Wilkens (Biloxi) drew a foul as he acrobatically laid it up and in. He also converted the and-one opportunity to increase the lead to 42-16.

The Trojans did get a point back before halftime, but the Wildcats led 42-17 heading into the break.

SECOND HALF
Gross got things started for the Wildcats in the second half by drilling back-to-back 3-pointers to increase the lead to 48-17.

The Wildcats later continued the barrage from deep with four straight 3-pointers as Brown and Gross made two each to make the score 62-22.

After a quick Trojan basket, Brison Waller (Cleveland, Ohio; Garfield Heights) scored a putback and showed off the fancy footwork with a euro step layup, increasing the lead to 66-24.

With the Wildcats leading 68-29, Allen picked off an inbound pass and lobbed it over his shoulder to Brumfield who took the pass in stride and slammed it home, putting the Wildcats further ahead 70-29.

As Pearl River held a comfortable 70-31 lead, Preston Turner (Laurel; West Jones) made his way onto the court and drove the lane, catching a pass from Jair Currie (Albany, N.Y.; St. Thomas More). The freshman laid it up and in to put the Wildcats up 72-31.

The Trojans then went on a small run of their own, cutting into the deficit 72-40.

Turner ended the Trojan run with a layup and converted an and-one opportunity to make the score 75-40 in favor of Pearl River.

Alex Jordan (Hattiesburg) nailed another Wildcat 3-pointer and Jariyon Wilkens followed it up with a thunderous dunk to make it 82-42 Wildcats.

As time wound down in the second half, Jeremiah Foster (Clinton) got the ball at the top of the key where he found was doubled-teamed. The freshman forward fought through the defense to lay the ball up and in.

BY THE NUMBERS
Gross was nearly unstoppable on the night for Pearl River, scoring 21 points all from the 3-point line. He also led the team in rebounds with eight.

“As soon as I stepped on the court, I was ready to go to war with my brothers, and shoutout to them for believing in me,” Gross said. “It makes me want to go out every night and make them proud.”

Brown was second on the team with 14 points.

Allen rounded out the Wildcats in double figures with 11 points and added four rebounds.

Currie finished second on the team with six.

UP NEXT
The Wildcats hit the road on Thursday to take on Northeast Mississippi. The game is set to get underway at 6 p.m. and can be viewed at NEMCCTV.com.