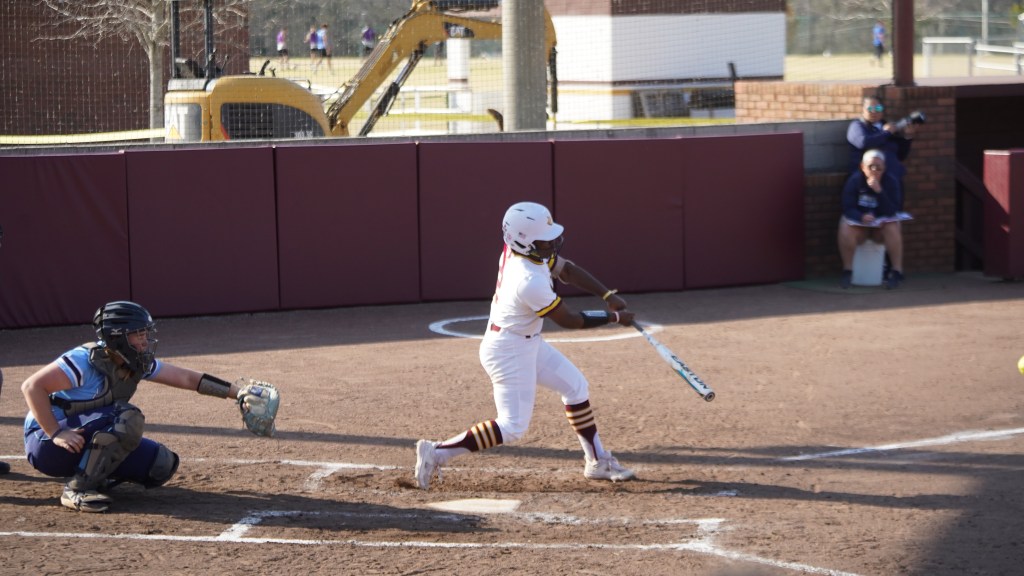 GULF SHORES, Ala. — The No. 17 Pearl River softball team competed in the Sun Chief Classic on Saturday and made quick work off all three opponents, beating Marion Military 2-1, Southern Union 1-0, and Coastal Alabama – East 14-2.

“Our pitchers stood out today. Hannah only gave up one run, Brinson threw a shutout, and Madelyn grabbed a win. That’s huge to do as a staff,” head coach Christie Meeks said. “I think that we need to continue to work on stringing runs together and playing aggressive. Overall, these were three team wins; Our dugout was on fire and our team played with and for each other.”

Hannah Embry (Vicksburg; Porters Chapel Academy) took the mound for the Wildcats in game one and retired six straight to open the ballgame.

From there a pitcher’s duel ensued as neither team could manufacture offense.

Marion Military (10-10) plated a run with two outs in the top of the fourth on a triple, but Embry struck out the last batter to end the threat.

The Wildcats had a chance to score in the bottom of the fourth, but the runners were stranded at second and third after a strikeout.

From there, Embry continued to pitch well, working out of a bases-loaded jam in the fifth to keep her team in the ball game.

With one out in the bottom of the seventh, Jena Pacheco (Vancleave) found her way on base via the hit by pitch. Kallie Hunt (Picayune) entered the game to run for Pacheco and was advanced to second on a hard-hit single by Cassidy Cartwright (Poplarville). Payton Lee (Picayune; Pearl River Central) followed up the single by getting hit by a pitch, loading the bases with one out. Taelor York (Choctaw; Clinton Christian Academy) stepped up to the plate with two outs and chopped a high grounder that was bobbled by the second baseman allowing Hunt to score, walking it off for a 2-1 Wildcat win.

Pacheco finished with a hit in two appearances and got on base via a hit by pitch.

Embry was lights out on the mound for Pearl River, pitching a complete game while only allowing one run on four hits. She also struck out 10 batters.

Game two proved to be another pitcher’s duel, as it wasn’t until then the third inning that a run came across the plate. Keigan Pearson (Carriere; Pearl River Central) smacked a hard-hit ground ball that drove in Emily Rigney (Waynesboro; Wayne County) to give the Wildcats a 1-0 lead.

That run was all Brinson Anne Rogers (Statesboro, Ga.) needed as she tossed a shutout for the Wildcats to give them a 1-0 victory over Southern Union (3-5)

Rigney was a major part of the offense for Pearl River in game two, collecting a hit in two at-bats and scoring the lone run.

York had a hit in three plate appearances.

Rogers continued her hot start to the year, pitching seven innings and striking out 11 while allowing just one hit.

Game three started with a bang as the Wildcats opened the scoring with York crossing the plate on a groundball by Juliannah Overstreet (Vancleave). Cassidy Bradford (Saucier; West Harrison) came around to score after Aunie Rethmeyer (Belle Chasse, La.) singled. The scoring continued as Overstreet came around to score after a throw to second allowed her to swipe home plate. Bethany Fewell (Mendenhall) hit a line drive into left field that brought home Pacheco, increasing the Wildcat lead to 5-0. After Lee walked, York drove her in with a single, increasing the lead to 6-0. The barrage continued as Miller launched a ball over the centerfield wall to increase the lead to 9-0.

Madelyn Burch (Franklinton, La.; Bowling Green) ran into some trouble in the second but worked her way out of the jam with a strikeout.

The Wildcats struck again in the third as Lee homered to dead center, bringing home Fewell to increase the lead to 11-0.

Later in the inning, York scored again this time on a passed ball as the lead swelled 12-0 in favor of the Wildcats.

Shortly after, Madi Waters (Laurel; West Jones) crossed the plate on a sacrifice fly by Erin Daughtery (Vancleave) to make the score 13-0.

The Wildcats capped their scoring after Bradford scored on a ground out by Janna Peterson (Poplarville), giving Pearl River a 14-0 lead.

Coastal Alabama – East (2-17) was able to get two runs back, but Burch closed out the game, capturing a 14-2 victory.

Burch continued the trend of solid pitching for the Wildcats as she pitched all five innings. She struck out seven and only gave up two runs on seven hits.

York was a force in the leadoff spot for the Wildcats, reaching all four times she came to the plate. She finished with two hits, two walks, three runs scored, and three stolen bases.

Miller homered on the night and collected two RBIs.

Lee had two hits in three plate appearances, one of which left the yard. She collected two RBIs and a walk.

Fewell collected two hits in three appearances and drove in a run.

Waters and Pacheco both recorded hits and scored a run each.

The Wildcats hit the road Tuesday to take on Northwest Florida. First pitch is set for 3 p.m.

No. 1 MGCCC takes on MACCC again