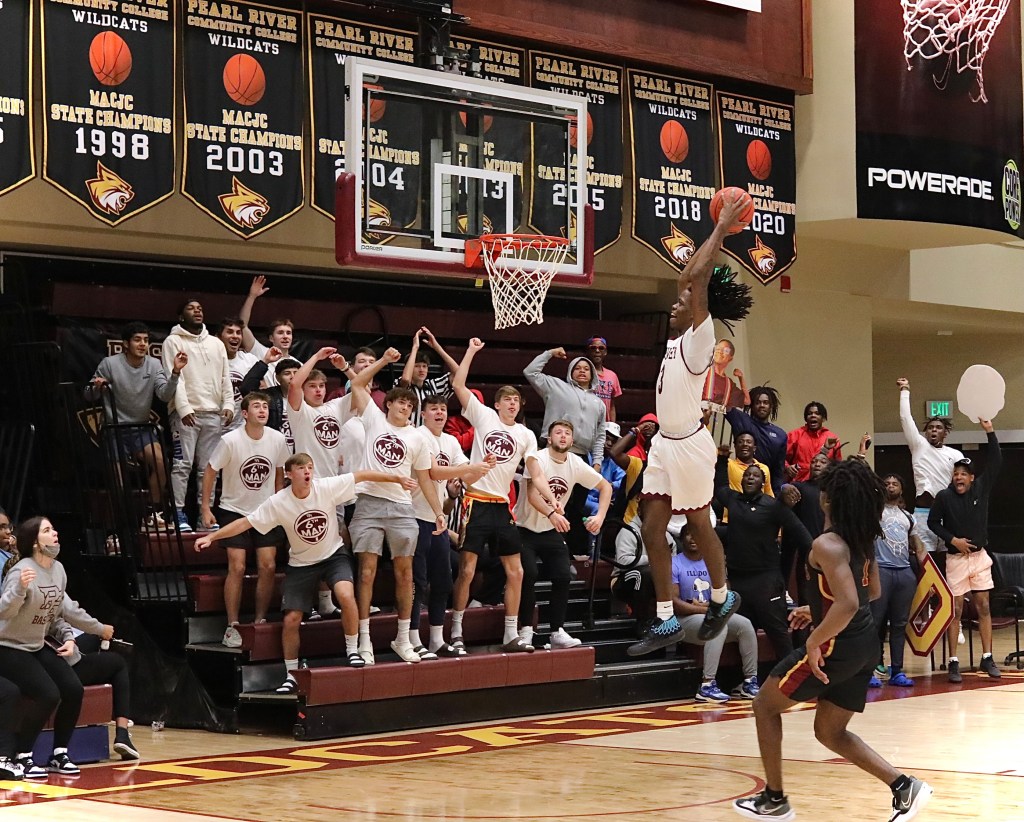 POPLARVILLE, Miss. — On a night that began with a MACCC regular-season championship presentation for the No. 16 Pearl River men’s basketball team, the Wildcats found more reasons to celebrate as they crushed rival Jones College 78-62 in the MACCC Quarterfinals.

The victory marks Pearl River’s eighth consecutive win over the Bobcats and was the most lopsided win for the Wildcats since an 81-64 victory in the 2009-2010 season.

“I thought that we played well, but we let them back into the game with some turnovers,” Pearl River coach Chris Oney said. “We fouled a little too much, but we were getting the ball where we wanted to get the ball. We were making shots and we were running down the floor well. It’s a rivalry game and I didn’t expect us to blow away with it. I knew they’d play to the end and luckily my guys did the same.”

FIRST HALF
Pearl River (20-2 overall) fell behind to Jones College (16-6) 7-6 early in the first half of the night. After a Dylan Brumfield (Hattiesburg; Oak Grove) layup, Ankerion Gross (Sardis; North Panola) hit a 3-pointer to make the score 11-7, giving the Wildcats a lead that they wouldn’t relinquish.

A few minutes later, Jaronn Wilkens (Biloxi) had the ball tipped out of his hands, but was able to scoop up the loose ball and fire a no-look pass to Earl Smith, Jr (Jackson; Lanier) who promptly nailed a 3-point shot to make the score 17-9.

The shot seemed to have swung the momentum in Pearl River’s favor as Cameron Brown (Hattiesburg) immediately knocked down a 3-point shot to give the Wildcats a 20-9 lead.

The 3-point barrage continued a few minutes later when Jariyon Wilkens (Biloxi) drove inside before passing out to J.D. Allen (Brookhaven; Wesson) who knocked one down from the corner, making the score 26-13.

The Wildcats extended their lead to 23-16 not long after. Brison Waller (Cleveland, Ohio.; Garfield Heights) earned a one-and-one opportunity and made both shots before using a spin move to get around defenders for a layup.

JC got two points back from the free-throw line, but Smith matched the points quickly as he maintained body control through heavy contact to get a layup to fall.

The Bobcats went on a run as the first half of play was coming to a close, eventually making the score 37-27 at halftime.

SECOND HALF
Pearl River was the first to get on the board in the second half as Jaronn Wilkens was fed a pass from Brumfield before backing into the paint and dropping in a layup to make the score 39-27.

The Wildcats then knocked down three consecutive 3-pointers to extend their lead to 48-27. Brown knocked down the first shot after Jaronn Wilkens found him all alone. Gross followed it up with a catch-and-shoot 3-pointer and Brown used fancy footwork to lose a Bobcat defender before knocking down the third.

Pearl River saw its lead swell to as much as 21 midway through the half as Jariyon Wilkens found his brother Jaronn Wilkens open in the paint for an easy bucket. The basket made the score 56-35

With the score sitting at 65-41, a Bobcat defender tried to drive the lane but Allen stuck his arm out and poked the ball away. The guard tracked down the ball and lobbed it down court to the sprinting Jaronn Wilkens. The sophomore forward grabbed possession of the ball, dribbled twice and threw down a vicious two-hand slam to give Pearl River a 65-43 lead.

The Bobcats got a basket back, but then Jaronn Wilkens tried to one-up his slam from seconds before. This time, Wilkens made the play both defensively and offensively. As the JC player came dribbling by, Wilkens swatted the ball away and picked it up a half-court. He then sprinted down the lane and threw down a rim-rattling one-hand dunk, making the score 67-45 in the process.

PRCC went ahead 70-48 a bit later as a Wildcat shot clanked off the rim and bounced to Allen. Allen stepped back to make sure he was behind the 3-point line and hit nothing but net.

The Wildcats continued to pour it on, finding themselves up 76-60 with 20 seconds left in the game.

STATISTICALLY SPEAKING
Jaronn Wilkens led the Wildcats in scoring with 15 points. He finished one rebound shy of a double-double with nine.

“Jaronn did a really good job of taking what the defense gave him tonight,” Oney said. “They made it tough on us but once the dust settled we were able to get him going.”

Brown finished the night with 13 points. Smith, Brumfield and Allen rounded out those in double figures with 10 each.

“I’m proud of him. When we first got him on day one of practice, he was not defending the way that he is now. I sometimes have to check myself because I’m putting him on the best player. He has really risen to the occasion and has become an integral part of what we’ve got going.”

Jariyon Wilkens and Gross tied for second on the team in rebounds with eight apiece. Allen grabbed seven boards, good enough for third.

TROPHY PRESENTATION
In addition to the men’s trophy presentation, the Pearl River women’s basketball team was also presented its regular-season championship trophy prior to the start of the game. The Wildcats racked up an impressive 12-2 conference record to lock down the title.

NEXT UP
Pearl River returns to action tomorrow against East Mississippi in the MACCC Quarterfinals. The game is set to tip off at 7:30 p.m.

TUNE IN
All home Pearl River basketball games are livestreamed for free at PRCCMedia.com/gold. Fans who have Roku, Amazon Fire or Apple TV devices can also watch the Wildcat broadcasts by downloading the “Pearl River CC” channel from their app stores.
Games can also be heard on WRJW 1320-AM, 106.9 FM and WRJWRadio.com.