Motorists advised to only cross Highway 11 median at designated areas 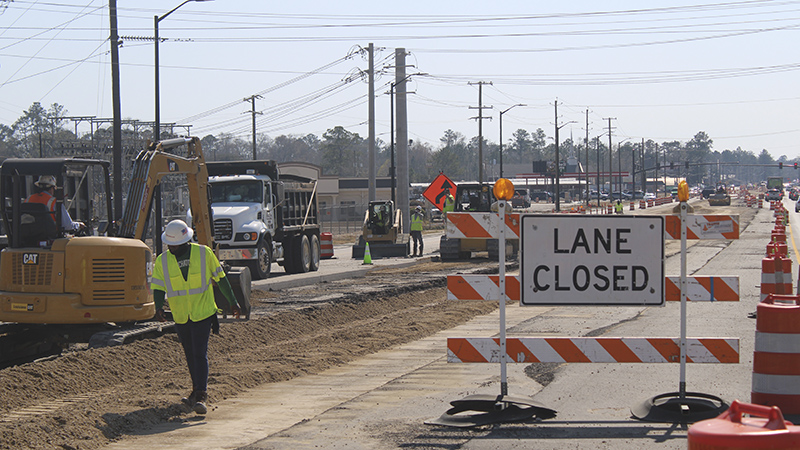 Crews working to widen Highway 11 in Picayune are currently digging up the median, creating a dangerous situation should a motorist decide to cross the median in the wrong spot. There have been reports of vehicles attempting to cross in the wrong spot becoming stuck. Photo by David Thornton

As part of the ongoing work to widen Highway 11 in Picayune, contractors for the Mississippi Department of Transportation shifted traffic leaving a wide gap in between the travel lanes, at times making access to a number of businesses difficult to find.

The gap is where crews are building median islands.

Currently, crews are digging out the asphalt to put in a base of stone and curbing before eventually applying concrete.

The digging has created holes in the road between north and southbound lanes. When it rains those holes fill with water and become less visible to drivers.

“We are doing our best to cone those off,” said MDOT Engineer Dexter Childs.

Childs advises drivers to not drive through the cones in an effort to get to a business or the opposing lane of traffic because it may lead to damage to a car and the person driving. “You can fit, but the cones are there for protection to show that area is under construction,” he said.

Picayune Police Assistant Chief James Bolton said that while he was off duty one day, he witnessed a driver damage two front tires trying to cross median from McDonalds.

“The main thing is when traveling on the highway construction, be careful and pay attention to where the lanes are marked, do not attempt to go across the median unless it is an open area that is designated for crossing,” said Bolton.

Damage to vehicles can occur if the vehicle runs into a hole, Bolton said. It’s also a traffic violation for motorists to cross the median in an area that isn’t designated for crossing.

Bolton said drivers should be mindful of the speed limits in construction zones because fines for violating traffic laws in those areas are substantially higher.

Childs says it’s hard to say when the median will be complete but estimates it might be a month from now.

“We should have all the curb in to where it’s clearly defined probably a month or so,” he said.

The curb will help drivers distinguish areas where they can cross the median. The estimated completion of the entire phase 1 widening project is by this summer.