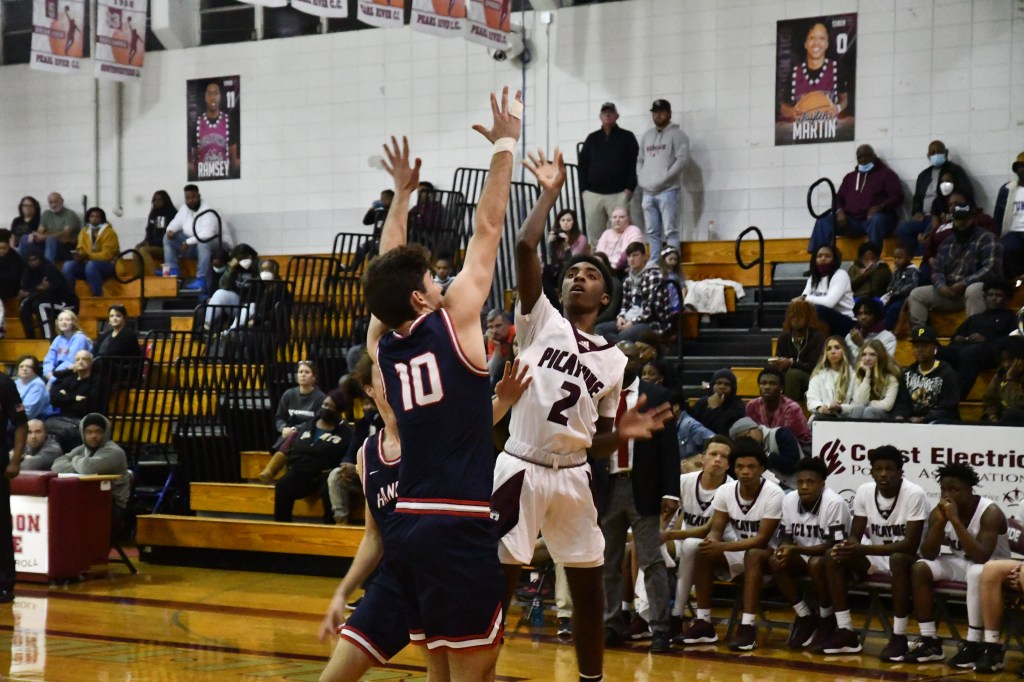 Picayune Maroon Tide’s (15-8) senior night game was not only a conclusion to the team’s three seniors playing at home, but also an end to a long seven game win streak. On Friday night, the Maroon Tide lost to non-region opponent the Hancock Hawks (17-8) 56-50.

In the first quarter, the Hawks struck quickly taking a 4-0 lead. The Maroon Tide answered with authority after a two handed slam by senior Isaac Brice. With 2:30 to play, the Hawks were up 10-4. A layup by junior Joshua Holmes and two completed free throws by sophomore Niquis Ratcliff put the Maroon Tide within two. Before the half ended the Hawks hit their third three of the quarter and led 13-8.

In the second quarter, the Hawks scored three points the old fashioned way to push the lead to 16-8. After that energizing play, the Hawks went on a 16-8 run to end the quarter. In that run the Hawks made nearly every three they put up and the Maroon Tide struggled to find their usual offensive rhythm.

Down 32-16, the Maroon Tide came out of the half with more rhythm. Holmes hit a three and scored a layup. Junior Jaheim Everett scored his first points of the night and Brice added his own layup to the total. With 3:30 left to play, the Maroon Tide cut the Hawks lead to 36-25. The Hawks scored a five point run after that, and then Holmes came down the court and hit a walk-up three from the top of the key. With less than two minutes to play, freshmen Dakeith Quinn found junior Troy Carter for three, making the score 31-41. With 8 seconds left, Holmes got a steal in mid court and was fouled immediately. The referees called the foul a technical and Holmes ended up making two free throws to put his team within six points.

In the fourth quarter, the Maroon Tide trailed 41-35. With 3:30 left to play the Maroon Tide shrunk the Hawks lead to one points after back-to-back threes from Carter. They tied up at 47-47 after a Holmes three. The Hawks quickly answered with their own three to reclaim their lead. The Maroon Tide tried to full court press and got steals but the Hawks played discipline and stretched their two-point lead to a 9-point 56-47 lead with less than 30 second to play. The Hawks went on to win 56-50.

Holmes finished with a team high 20 points, and Carter had 15 points.

Next for the Maroon Tide is the district tournament, where Picayune will play the West Harrison Hurricanes at West Harrison on Feb. 8 at 7:30.