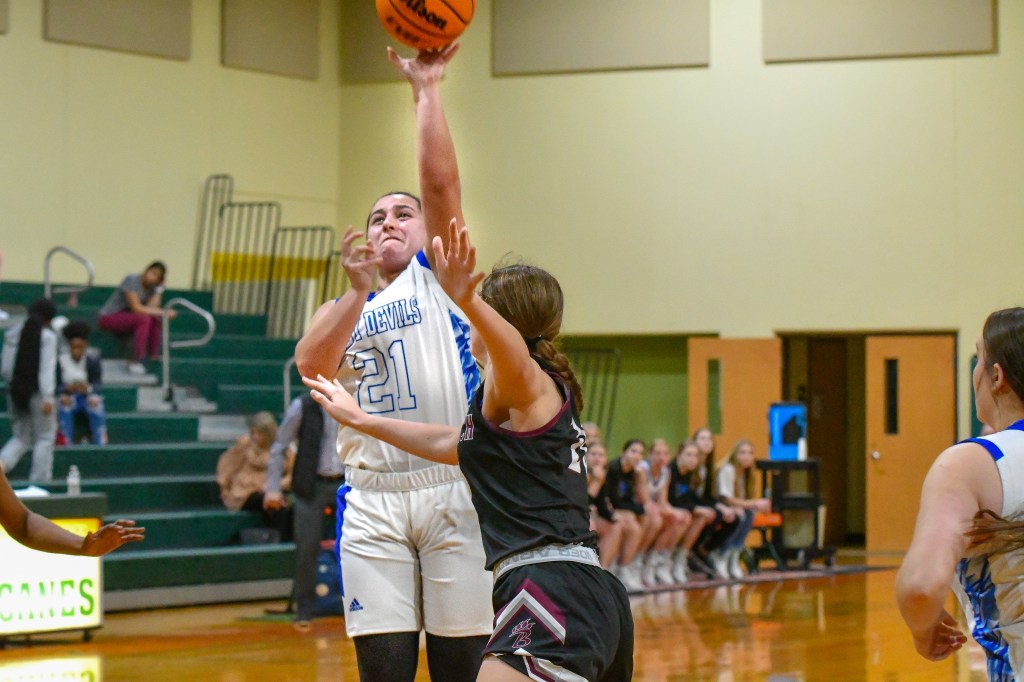 Junior Nia English floats up a shot over a Bearcats defender during the Lady Blue Devils 44-34 district championship win.

“They’re great kids and all of them do something different. Hollie is a defender, Hannah I think is the best player in district… Nia brings her energy and Emily is a sharp shooter,” said girls basketball Head Coach Cliff Bauer. “They’re better kids than they are basketball players and that just makes my job easier.”

Bauer added, “The kids played so hard and did everything we asked of them. This hasn’t been done at Pearl River Central in a long time. I’m so proud but ultimately they did it… when the kids show up, they show up, and they showed up tonight.”

At the end of the first quarter, English had four early points, and Carroll hit a three for a Lady Blue Devils 8-4 lead.

In the second quarter PRC’s offense began rolling. They went up 18-7 after scoring five points from Hannah Mitchell, a three from Carroll and a jump shot from Hollie Mitchell. The team jumped to a 21-9 lead after Hannah assisted Carroll for a three. Then, the scored increased to 27-9 after English’s layup. At the end of the quarter, the Lady Blue Devils led 27-12.

In the third quarter, the Lady Blue Devils led by 9. Hannah’s jump shot increased PRC’s lead to 33-20. The team eventually closed out the quarter up 34-20.

In the fourth quarter, the two teams traded buckets and despite a Bearcats late run, the Lady Blue Devils held on to win 44-34.

Next, the No.1 seed Lady Blue Devils will host the winner of Brookhaven vs. Hattiesburg this Friday, Feb. 18 at 7 p.m. in the second round of the 2022 5A Girls Basketball Championship.