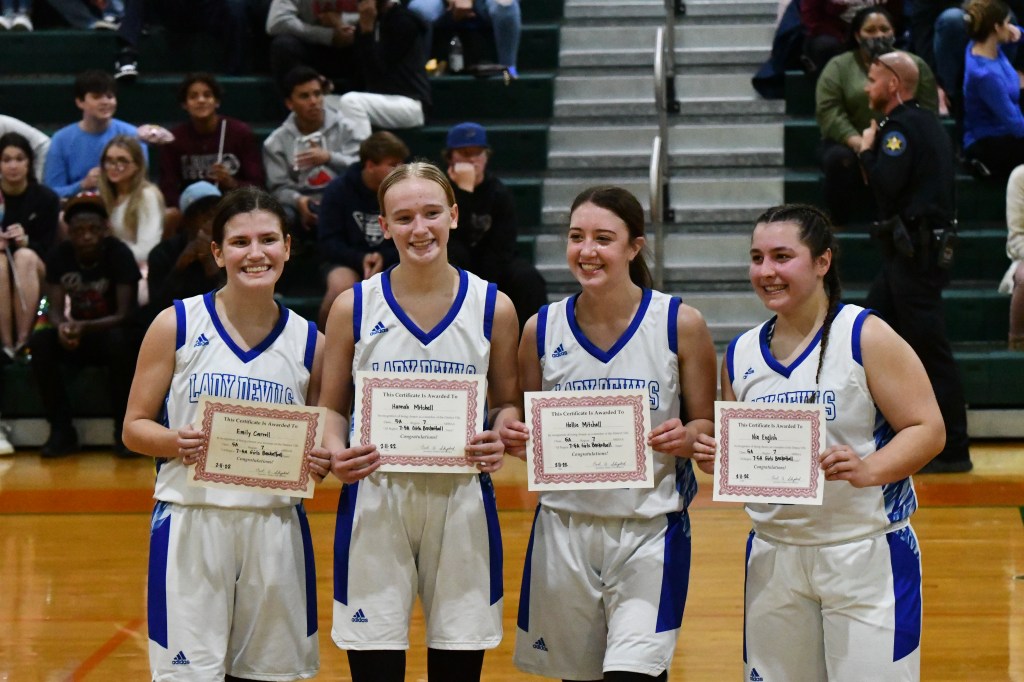 From left holding their all district awards are Emily Carroll, Hannah Mitchell, Hollie Mitchell and Nia English after beating Long Beach in the 4A region 7 districts championships.

Now that the Pearl River Central Lady Blue Devils are the 4A district champions, the team is ready for round two of the 4A state playoff against the Brookhaven Panthers on Friday.
The Lady Blue Devils checked off the team’s goal of winning the 4A district championships last Saturday night.
The team is led by Head Coach Cliff Bauer and their four star-studded athletes, senior Hollie Mitchell, juniors Nia English and Hannah Mitchell (district MVP), and sophomore Emily Carroll. All four were named 4A region 7 all-district players.
“Everybody kind of doubted our season because of the ups and downs, but to show them that we really can accomplish it, was like new air,” said English.
“It was fun. I was excited, and going into it I felt like we were prepared and ready to go,” Carroll said.
“It was something we never got to experience before,” said Hannah Mitchell.
Mitchell, who Bauer believes is the best player in district, is a solid all around player. She leads as point guard for the Blue Devils, can make shots from anywhere on the court and is a consistent playmaker on offense and defense.
English is a forward who brings all the energy; she has the ability to affect both ends of the court.
She’s also good for two or three steals leading to coast-to-coast layups per game. Carroll is a sharp shooter who’s a threat to hit multiple threes a night and Hollie Mitchell is the team’s glue and described as a big asset to the Blue Devils team.
Whatever the team needs from her that night, she delivers.
With a first round bye in the 2022 4A Mississippi Championship, the Lady Blue Devils Tuesday afternoon practice involved game planning against the Brookhaven Panthers full court press, ball handling under pressure and getting into an early offense.
To give the team a similar feel of what the Panthers will bring Friday, a few of the boys team players scrimmaged the Lady Blue Devils.
Bauer aim was to show his team that if they can make the right plays on the boys team, then they’d have no problem on Friday.
Hollie says in order to achieve their goals, it’s important to keep a level head.
“We have to stay calm I’ve noticed whenever we’re calm and we just play the game and have fun and we do a lot better,” she said.
“Especially have fun,” said Carroll. “If were having fun everything goes smoother, that’s the most important thing to me is having fun,”
To English, when they’re having fun on the court their confidence goes up too.
The girls agreed they still have few things to iron out before facing the Panthers.
“Don’t play fast but don’t play in a hurry… don’t rush your decisions,” said English
Hannah added, “Play smart.”
“Play smarter not harder” English said.
Tip off for the second round of the playoff is set for Friday the Feb. 18 at 7 p.m.