Lady Blue Devils fall in second round of state tournament 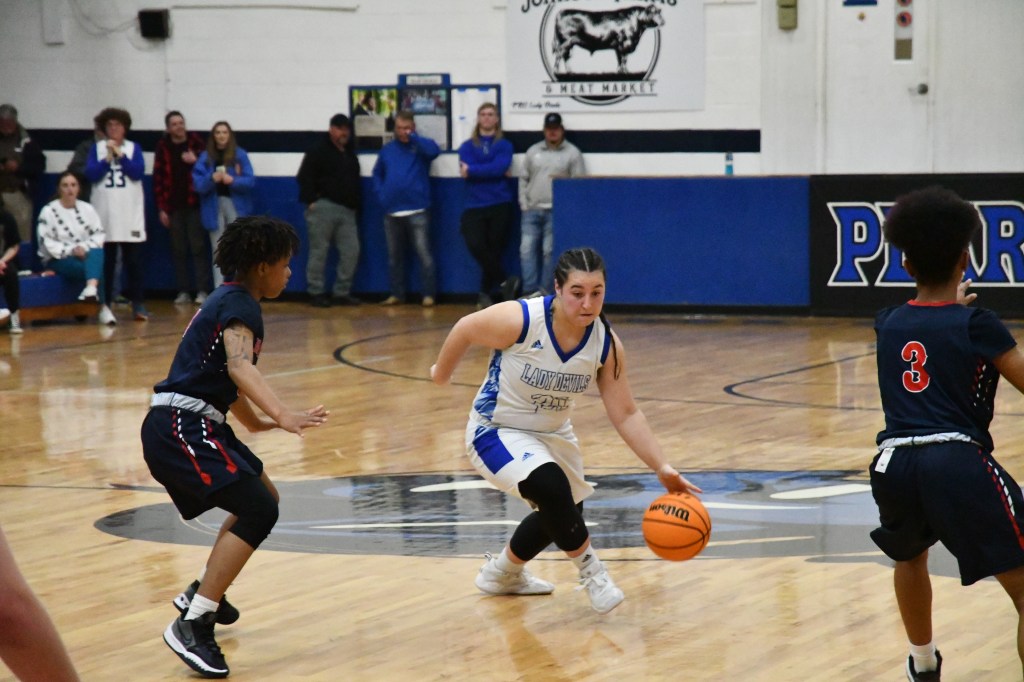 Junior Nia English dribbles past a defender during the Lady Blue Devils' loss to Brookhaven Panthers on Friday night.

The Pearl River Central lady Blue Devils basketball team fell to the Brookhaven Panthers 45-28 in the second round of the state tournament.

“The lack of ball handling kind of hurt us tonight but another thing that was a win for me was the (Panthers head coach) pulled his first group and as soon as he did my kids hit a couple of buckets and he got his kids back in. So to me that’s a win I was real proud of the kids. We loss by 17 and as coach and as a competitor I just wanted to cut it to 20 (points). They hit a couple of buckets and we lost by 17,” said Blue Devils Head Coach Cliff Bauer. “I’m extremely proud of them.”

The first quarter was a tight game that ended with an 8-8 tie. Junior Hannah Mitchell scored four points, and Juniors Nia English and Hannah Hopkins each had layups. In the second quarter the Lady Blue Devils had a sluggish quarter. The team only scored two points compared to the Panthers’ 16. At the end of the half, the Lady Blue Devils found themselves down 24-10.

In the third quarter the story was much of the same, the Panthers defensive pressure didn’t allow the lady Blue Devils to get anything going on offense. Sophomore Emily Carroll was the lone scorer with four points while the Panthers scored 17. At the end of the quarter, the Panthers led 41-14.

In the fourth quarter the Lady Blue Devils out scored the Panthers 14-4. Carroll had six points and Mitchell contributed four points. The Blue Devils eventually lost 45-28.

Statistically, Mitchell and Carroll finished with 10 points each. The Lady Blue Devils finished this season 12-11 (6-2), and accomplished won the 2021-22 district championship.