Krewe of Pearl parade returns to ride this Saturday 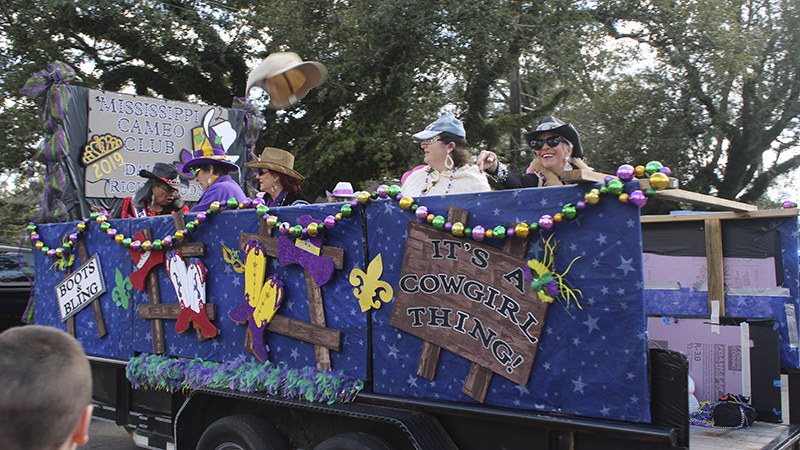 During this rendition of the Krewe of the Pearl’s last Mardi Gras parade, held in February of 2020 just before the pandemic, participants throw a number of items to the crowds. This year, the Krewe will be throwing hand decorated oyster shells along with the typical throws. File photo

The Krewe of Pearl’s annual Mardi Gras parade will be back this Saturday, Feb. 5 after being on a hiatus for the past two years due to the COVID pandemic.

Starting at 2 p.m., the parade will begin rolling from Chimney Square on Goodyear Boulevard toward Highway 11. The route will then take the parade left on North Main Street before crossing over to Fourth Street over the railroad tracks and then onto Highway 11 South. From there the route will head down Highway 11 South for a short time before taking a right on West Canal where the route will take another left onto Ruby Street before ending at the large empty parking lot near the Picayune Police Department.

This year’s theme is “A Return to Elegance” and participants will be throwing beads, candy, doubloons and decorated oyster shells as specialty throws.

An end of parade event will be held at Southern Char offering food and a party.

“I wasn’t a big parade person years ago but I am now, and I enjoy it. I enjoy our little small town parades.

Smith also wants to see the Krewe and its parade expand as the years go on.

“That’s my intention, where it’s good, safe and fun for everybody, ” said Smith.

Because of the pandemic, parades and balls for the Krewe of the Pearl had to be canceled the past two years. Now that the Krewe has the opportunity to hold the ball, which was held last Saturday, and the parade in 2022, their focus is to increase community interest and make the parade bigger and better.

“It was kind of nerve-wracking at first, but it turned out to be a very nice event,” said Smith.

Anyone interested in entering their own float can visit the Krewe of Pearl Parade Facebook page for more information.

So far, Saturday’s parade is expected to feature 14-15 floats including the past and current king and queen, and antique cars. The antique cars will have their vehicles on display after the parade at the parking lot.

Organizers of the parade are still looking for bands to play during the parade. Entries can be submitted via the Krewe of Pearl Parade Facebook page. Entries will be accepted up to the day of the parade.

“We’d like to get more people involved because… a bigger parade draws more folks and believe it or not that’s economic development for our county,” said Smith.

“Anything they want to find out about the Krewe of Pearl, go on our Facebook page and find out. If not, ask us and we’ll get with you,” said Kane.