Humble kids who are hungry for more than All-district notoriety 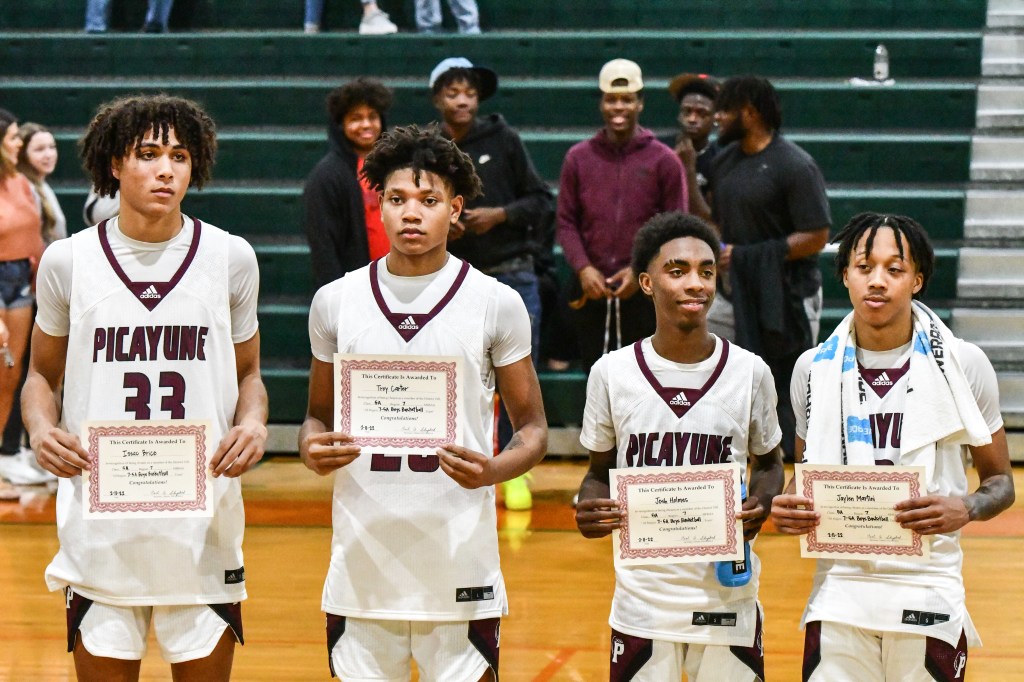 From left holding their all district awards are Isaac Brice Troy Carter, Joshua Holmes and Jaylen Martin after beating Long Beach in the 5A region 7 districts championships.

As the Picayune Maroon Tide basketball team switches gears to head into the playoffs, the team’s main goal is to win a state championship. The team is led by Coach of the Year Eric Vianney and All-District players, seniors Isaac Brice (district MVP), Jaylen Martin, and juniors Joshua Holmes (district offensive MVP) and Troy Carter.
The Maroon Tide has a first round bye in the 2022 5A Mississippi Championship. Even with the long turnaround, Monday’s practice was not a light day. Vianney says the next few practices will be detailed.
After nearly an hour of stretching and shooting with partners, the practice got a little more active. In the remaining hours players worked on transition offense and defense, full court one-on-ones, team shooting drills and half court defensive shell drills. They also split into groups of post and guards, working on individual skills and got even more shots up. To close out practice, they played transition 4v4 and 5v5 sets.
After practice, the four all-district players got a chance to talk about their recent accomplishments and current goals.
“We got to get that gold ball, it’s right there in our hands. We got to get it. We can’t distract ourselves. We got to focus up… go big or go home.” said Martin.
The four previously mentioned players and their teammates understand the rest of the games ahead won’t be easy and that accomplishing their goal starts at practice.
“We got to work hard everyday,” said Holmes.
All four team leaders said it felt good to be selected as All-District players. Troy Carter is a sharp catch-and-shoot player who doesn’t need much to get started offensively. If one or two shots go in for him, he might not miss for the rest of the night.
District MVP Isaac Brice started playing organized basketball this past year, yet he plays the game efficiently, since it comes easy to him. He’s developed his skill set to be a very athletic forward who grabs every rebound and alters every shot on defense. He is also good for one or two highlight dunks per game.
“It felt good (winning MVP), I just started playing basketball last year so it shows that I’ve been putting in some work,” he said.
Offensive MVP Joshua Holmes is a sniper behind the arc and a serious scoring threat once he crosses half-court. Other teams have taken note. They’ve tried to face guard him in recent games, but he’s proven that isn’t enough to stop him.
“It felt good (winning offensive MVP), being the little guy, I’m just playing confidently and being confident in what I can do,” he said.
Jaylne Martin is a true floor general; he commands the offense and does a little bit of everything. He enjoyed winning a district championship and being named All-District, but now his eyes are set higher.
“It felt good, and it’s going to feel better if we get our main goal, because that, just a little piece of it, felt good,” he said.
The Maroon Tide will host the South Jones Braves in round two of the 2022 playoffs. Tip off for round two is Saturday, Feb. 19 at 7 p.m.