Hornets keep rolling after win over the Bay Tigers 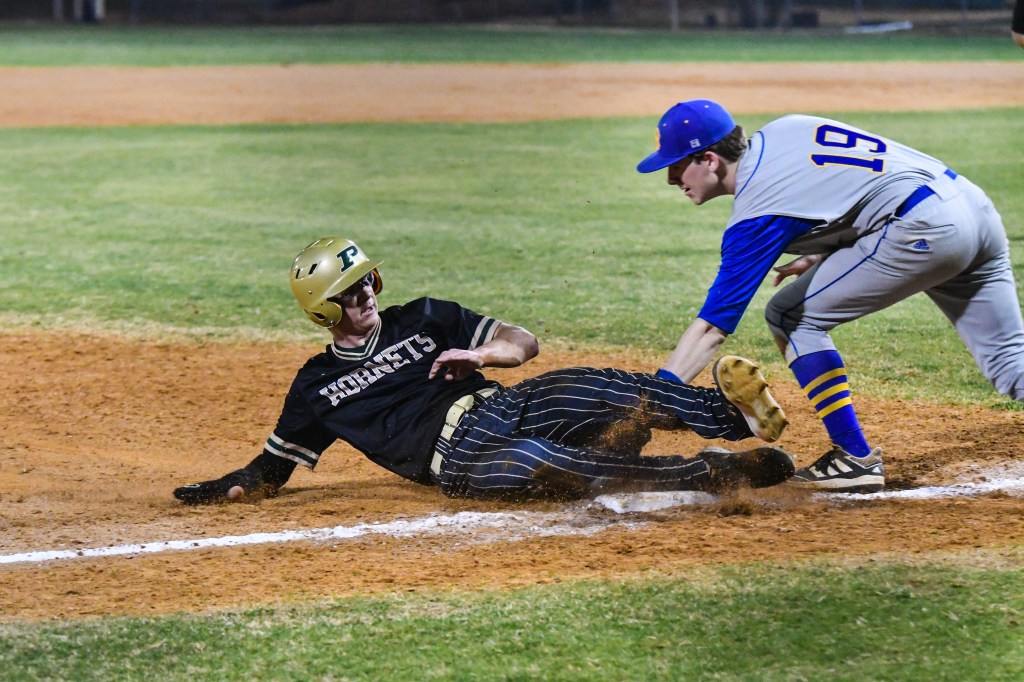 Sophomore Preston Smith slides in to steal third base during the Hornets 9-3 win over Bay High.

The Poplarville Hornets baseball team moves to 4-0 after beating the Bay Tigers 9-5 on Tuesday. The Hornets jumped to a large 6-1 lead in the bottom of the first inning. Then the Hornets scored three runs at the bottom of the fifth inning that eventually closed out the game.
“We kind of put on cruise control, kind of let them hang around,” said baseball Head Coach Slade Jones. “Ultimately we got out there with a win, it was just something we touched on after the game and what we’ll touch on during practice is trying not to pay too much attention to the scoreboard. And asking them in a sense that we don’t ever want to stop what we’re doing regardless of the score and play our brand of baseball all the way to the end.”
At the top of the first with Tigers runners on first and third, a deep fly ball was caught by the Hornets, but the Tigers had enough time for the third base player to make it home. The Tigers led 1-0 with two outs.
At the bottom of the first, with a Hornets runner on first and second, a deep mid field hit by junior Joseph Blackeney allowed senior Riley Passman to score from second base. With no outs the Hornets tied the game 1-1.
With bases loaded and senior Eli Goodwin at bat, the Tigers’ pitcher walked Goodwin, giving sophomore Emile Pace a walk to home plate. Hornets took the lead at 2-1. With one out, a deep fly ball was caught but allowed enough time for Blackeney to score. Senior Matt Rogers’ hit allowed senior Zack Smith and Goodwin to score and the Hornets’ lead quickly increased to 5-1. With two outs, senior Westin Shaw’s hit allowed Rogers to score for a 6-1 lead.
The Tigers went on to score one run at the top of the second and third innings. At the bottom of the fifth, the Hornets scored three runs. With a runner at first and Goodwin at back, Goodwin knocked a Tigers pitch over the wall for a Hornets home run. Poplarivlle’s lead increased to 8-2. With only two outs and the bases loaded, a wide mishandled pitch and catch by the Tigers allowed freshmen Brock Sheppared to steal home plate. That gave the Hornets a 9-3 lead.
At the top of the sixth inning, the Tigers failed to complete a comeback. They managed to score two runs before being struck out.
Jones was pleased with the pitch performances by Braxton Conerly, Westin Shaw and Matt Rogers, who closed out the game.
“The pitchers did what we asked them to do, they came in they threw a lot of strike… and we had some really good plays on defense,” Jones said.
Jones’s said the Hornets defensive play of the game was during the top of the sixth inning during the Tigers attempt at a comeback. With the Tigers having two runners on base, they made a hit right up the center field gap. Outfielder Sheppard made a “strong, accurate throw,” said Jones, to third base putting the Tigers runner out and preventing a three run score.
“It was kind of spoiling their beginning, and to me that was really, really big,” said Jones.
Statistically, Rogers had 1-2 double and two RBIs. Goodwin had 1-3 BB one home run and three RBIs. Blakeney had 1-4 double, and one RBI. Rogers closed the game with three strikeouts.
Next the Hornets will play the Tigers at Bay High on Friday, Feb. 25 at 7 p.m.