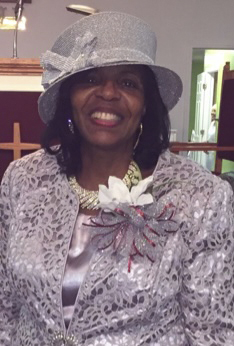 “And God shall wipe away all the tears from their eyes.” Revelations 21:4

First Lady Gwendolyn Delois Wesco was a humble and devoted servant of God.

First Lady Wesco was born on December 3, 1949 in San Francisco, CA to the late Charles Allen Russell & Mo. Maggie Mae Scott. She was also raised in Glenmora, LA. She is the oldest of 13 siblings. At an early age, she accepted Jesus Christ as her personal savior & was baptized. She was brought up in a musical family where she learned how to play the piano. She was a proud graduate of George Washington Carver High School (Class of 1969).

On April 3, 1982, Gwendolyn united in holy matrimony with Alex Wesco, Jr. To this union, two beautiful daughters were born.

She had many jobs over the years. Her last employment was with the Picayune School District as a teacher for 23 years.

During the early years of her union to Alex Wesco, he became a pastor. She was a devoted First Lady. She also was a musician that played at several churches in the Picayune area. She was very active in the church. She served as the Sunday School superintendent, Sunday School teacher, leader of Music Ministry, VBS superintendent, Mission, and many other roles at Greater Emmanuel Missionary Baptist Church. She loved to play the piano & sing. Her favorite song to sing was “When I See Jesus”.

First Lady Wesco transitioned peacefully from her earthly home to her heavenly home on February 19, 2022 at home with her daughters (Alexis & LaKeecia) who were also her caregivers. “We are confident, I say, and willing rather to be absent from the body, and to be present with the Lord”. 2 Corinthians 5:8

Walk-thru visitation will be held on Saturday from 4:00 – 6:00 pm at Greater Emmanuel Missionary Baptist Church.