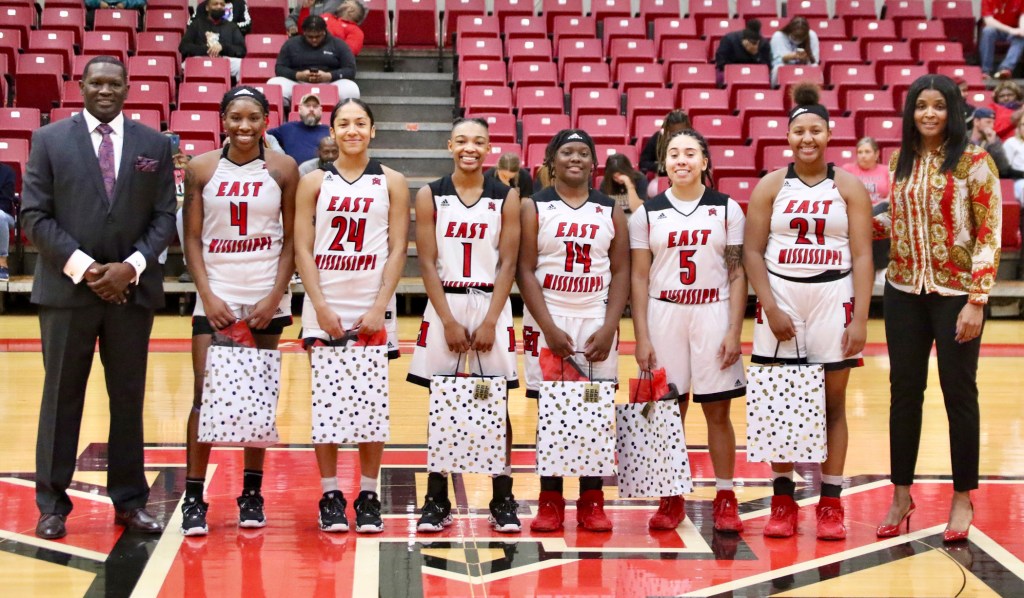 SCOOBA/MERIDIAN — Home teams prevailed during Monday’s MACCC basketball showdowns between rivals East Mississippi and Meridian played on the schools’ respective campuses. The EMCC Lady Lions successfully closed out their regular-season home hoops slate on Sophomore Night with a hard-earned 71-68 victory over MCC’s Lady Eagles at Keyes T. Currie Coliseum, while the visiting Lions were downed, 74-53, by hot-shooting Meridian during men’s action at Graham Gymnasium.
In women’s action on the Scooba campus, Meridian scored the game’s first three baskets on the way to holding a 19-14 lead at the end of the first quarter. After the two teams battled to three more ties during the second quarter, EMCC scored seven unanswered points to close out the half with a 38-33 lead heading into intermission.
Following the break, the Lady Lions continued to maintain their advantage for most of the third quarter, though each team enjoyed a wave of momentum as the quarters switched over.
A 10-2 run by the visitors gave Meridian a brief 54-53 lead by the end of the third quarter.
After a second straight put-back basket by Nylah Ballard put MCC on top by three points to begin the final period, EMCC scored eight unanswered points early in the fourth quarter to take the lead for good.
The Lady Lions later grabbed a six-point lead (66-60) by the 4:30 mark on Siarra Jackson’s three-point play on an inbounds set.
Meridian trimmed the deficit to two points three times down the stretch, but EMCC had an answer each time.
En route to registering her third double-double in the past four games, Jackson helped secure EMCC’s third straight win by drawing a charge with 16 seconds left in the contest and then capping off her career-best night by hitting three free throws over the game’s final 13 seconds. Jackson, from Ripley, posted career-high marks of 31 points (10-20 FGs & 11-12 FTs) and 15 rebounds (11 offensive boards) in the contest.
EMCC’s Markiema Lancaster followed with a dozen points, six rebounds and three assists, while DJ Williams added eight points, seven assists and three steals for the winners.
In falling to 9-11 overall and 6-7 in MACCC play, MCC’s Lady Eagles were led by Elissa Murry and Lizzie Walker with 18 and 14 points, respectively. Callie Cowan and Ebony Fulford added 11 points apiece for the visitors.
The men’s contest in Meridian was basically one-sided from the outset. The Eagles scored the game’s first nine points, while EMCC’s first made field goal didn’t come until around the nine-minute mark on a Jakorie Smith dunk. The Lions missed their first eight shots from the field and committed eight turnovers during their game-opening dry spell from the field.
Smith’s three-pointer at the end of the opening half made it a 21-point (38-17) contest at the break, but that was as close as the visitors would get the rest of the way.
The Eagles then scored the first six points of the second stanza to extend the margin to 27 points (44-17), before EMCC could get back on the scoreboard with Traemond Pittman’s drive to the basket five minutes into the half.
The remaining 15 minutes of action were pretty much the same, as Meridian continued its red-hot shooting from the field to keep the visitors at bay throughout the night.
While struggling with 31 percent shooting during the contest, the Lions were led by Smith and Blake Butler with 15 and 13 points, respectively.
Improving to 17-5 overall and 9-4 within the MACCC, the Eagles were paced by Makeem Roberts’ game-high 21 points, including 16 in the second half. Brandon Ellington followed with 13 points for Meridian.
The East Mississippi basketball teams will conclude the MACCC’s regular season with Thursday (Feb. 17) contests against Mississippi Gulf Coast. Head coach Billy Begley’s EMCC Lions (16-6, 9-4 MACCC) will play host to the Bulldogs on the Scooba campus, while head coach Sharon Thompson’s Lady Lions (11-10, 8-5 MACCC) will travel to Perkinston to meet Gulf Coast in women’s action. Both games are scheduled for 6 p.m. tip-offs.