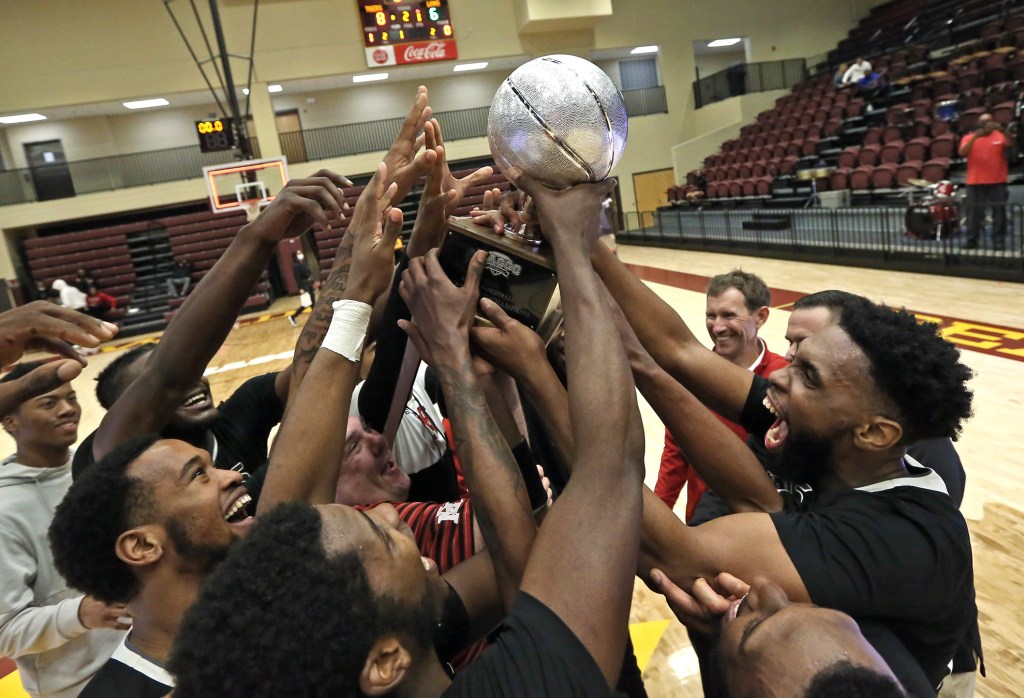 EMCC’s three-day tournament run this week at PRCC with earlier wins over Northwest Mississippi (69-55) and top-seeded and tournament host Pearl River (57-51) matches the Lions’ feat of the 2018-19 season when they captured the school’s first men’s basketball conference crown since the early 1930s with a similar tourney trek in Ellisville. East Mississippi has now collectively won three consecutive MACCC basketball tournament championships with the men’s titles this year and in 2019 coupled with the women’s championship run in 2020 on the Scooba campus. A conference basketball tournament was not held last year after the MACCC made scheduling adjustments during the coronavirus pandemic.

On the heels of handing 16th-ranked Pearl River its first loss in three months during Wednesday’s semifinals, the Lions battled traditional MACCC North Division foe Northeast Mississippi for the entire 40 minutes during a competitive championship classic. After four early ties, the Tigers grabbed a 21-13 lead by the 7:46 mark with an 8-0 run. In addition, EMCC’s all-conference forward Jakorie Smith was saddled with a pair of early fouls.

After still trailing by seven points (24-17) later in the half, the Lions received the first of four boosts on the night from all-conference candidate Blake Butler. The Louisville, Kentucky native drilled a three-pointer and followed with a basket at the rim to cut the deficit to 24-22. Nick Walker’s back-to-back buckets, including a put-back slam, then tied things up at 26-26 with 2:22 left in the half.

Following the break with the score still knotted (30-30), Danny Washington’s made trey to open the second half gave the Lions a lead they would not relinquish again the rest of the game. Maintaining that advantage, however, would not come easy for EMCC against a talented Tigers team.

The defenses prevailed during the early portion of the second half with only three made field goals by both teams combined through the opening eight minutes. Six straight free throws from Smith and two more by Brandon Deravine put the Lions on top by seven points (41-34) at the 13:08 mark.

That’s when Butler made a statement with a highlight-worthy thunderous slam down the center of the lane that extended EMCC’s lead to 43-34 with 11:22 remaining in the title tilt. To their credit, the Tigers responded by scoring the next five points to make it a four-point contest midway through the half.

Three minutes later, Butler came up big again by nailing his third trey of the game to put the Lions back up by seven points (48-41) with 6:34 left. Once again, however, Northeast answered with back-to-back baskets by Josh Mitchell and Hobert Grayson during a critical stretch of the game. The Tigers had a chance to cut the three-point deficit (48-45) even more, but they couldn’t convert on a layup attempt at the rim and missed on the front end of a one-and-one opportunity.

That set the stage for yet another big-time moment by Butler, as the 6-foot-5 guard completed a four-point play after connecting on his fourth triple of the game to extend EMCC’s lead to 53-45 with four minutes remaining in regulation.

True to form on this championship night, Northeast again valiantly fought back to score six unanswered points to make it a two-point game (53-51) on Jalin Rice’s put-back bucket with three minutes left.

Following a two-minute stretch where the teams traded scores, Steven Gentry finished with contact at the rim to again pull the Tigers to within a basket (57-55) just under the one-minute mark. With a chance for Northeast to tie the game after an EMCC turnover, Smith came up big defensively at the rim for the Lions with a blocked shot and defensive rebound that Walker converted into two made free throws on the other end with 45.4 seconds left.

The Tigers were then denied one final opportunity to even the score or possibly pull out the win down the stretch. After Gentry’s three-pointer with 16.9 seconds left made it a one-point (59-58) game, EMCC’s Traemond Pittman made one free throw on a two-shot attempt four seconds later. Northeast then came up short on the game’s final possession, as Rice’s shot misfired at the final buzzer to nail down the Lions’ 20th win of the season and secure their second title in three seasons of conference tournament competition.

The game’s defensive intensity throughout the entire 40 minutes of play was revealed in the final team statistics. Northeast outshot EMCC, 41 percent to 36 percent from the field, but the Lions outscored the Tigers by a 23-10 margin at the free throw line, including making 17-of-19 charity tosses (90%) during the second half.

As EMCC’s standout of the finale, Butler finished with a game-high 21 points on 7-of-12 shooting from the field and 4-of-7 accuracy from beyond the three-point arc in addition to pulling down seven rebounds. Walker registered his 11th career double-double and sixth of the season with 12 points and 11 rebounds. Smith added 10 points, six boards, three assists, two steals and a pair of blocks in the victory.

Falling to 21-5 on the year, Northeast’s lone double-digit scorer in the contest was Rice with 19 points.

Coach Billy Begley’s 20-6 EMCC Lions will maintain their No. 4 seed as they participate in next week’s NJCAA Region 23 Basketball Tournament. They will play host to 13th-seeded Itawamba in a 6 p.m. opening-round game Monday at Keyes T. Currie Coliseum on the Scooba campus. With a victory over ICC, the Lions would stay at home Tuesday to take on the winner of Monday’s matchup between No. 5 seed LSU Eunice and 12th-seeded Hinds at 6 p.m. in Scooba.