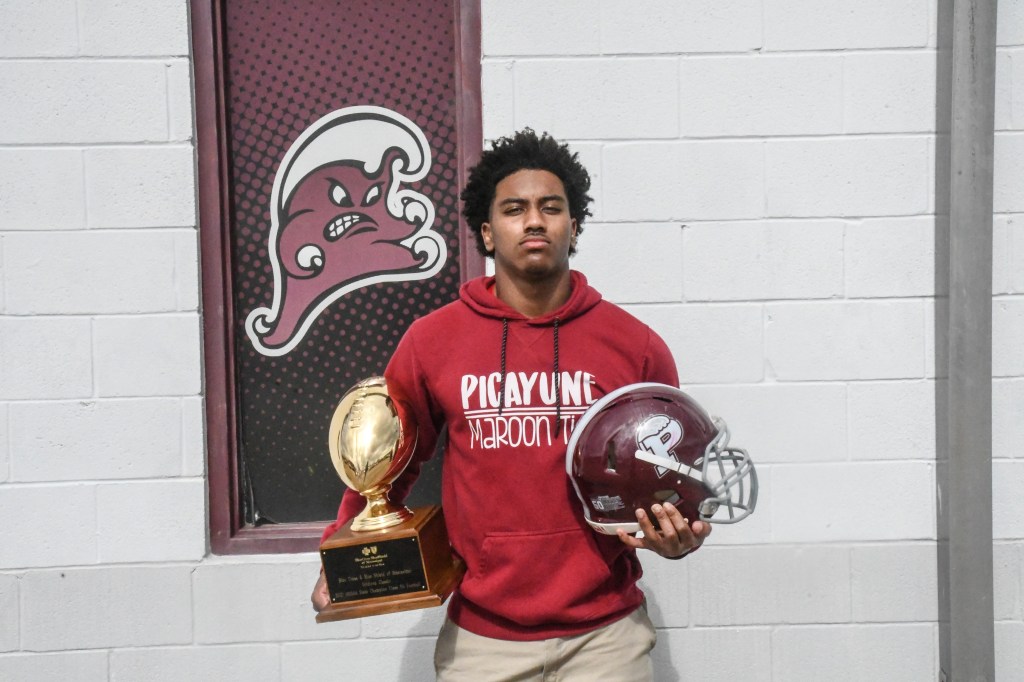 Picayune Maroon Tide and MaxPreps Player of the Year Dante Dowdell has a big Division 1 offer to add to his already 12-offer collection. On Sunday, Dowdell received his first SEC offer from the University Auburn. Some of Dowdell’s other offers include, University of Southern Mississippi, Oregon, Arkansas State, Boston College, Florida State, Alcorn, and Tulane.

Dowdell was the third leading rusher in 2021, covering more than 2,500 yards with 28 total touchdowns. He capped off his junior star-studded season with a 5A State championship win over West Point and the games MVP. He was also named MaxPreps’ Mississippi Player of the Year.

Dante believes he’s the best football player in Mississippi, and when he was named Mississippi MaxPreps Player of the Year he had zero offers.

“When I was awarded MaxPreps Player of the Year I didn’t even have an offer, it’s crazy.” He said. “They got four star players in Mississippi and they didn’t get it. It just proves to you that I’m the best player in Mississippi.”

When it’s all said and done, Dowdell wants to be the number one running back in Mississippi.

“Then after that we move on to number one back in the nation,” he said.

From having zero offers at the beginning of his junior year to now 12, Dante has been enjoying the recruitment process, along will giving his fellow teammates exposure. When asked how it feels to receive offers from powerhouse universities, he said, “It feels good and it’s definitely going to open a door for a lot of players here. You know, small town Mississippi you don’t see too many people just get offers like that, so I definitely get to open a door for the players here.” He said.

To help his fellow players get that exposure, Dowdell said he provides tapes of his teammates on the field to those making offers.

With all of the attention Dowdell has received over the past couple months, he’s remained humble and drives to inspire his teammates as they go through their own recruiting process. Dowdell said he would have loved to have been able to talk with someone who received offers back when he had none.

“They (my teammates) won’t have to worry about, ‘if any college is looking at me, or will I get recruited?’… they’ll be more relaxed about it because they know colleges are looking at them.” said Dowdell.

He says the best ways to stay humble it to share what he has learned about recruitment with his teammates.

The biggest advice he has for his teammates is to take their time in committing to a school.

“You really just got to look at all your options, don’t be so fast… just take it all in and don’t be so fast to react,” said Dowdell. “Wait till you think it’s the right time to make that commitment.”

Currently, Dowdell said he doesn’t know what school he will commit. Currently he still deciding if he wants to graduate high school a semester early and put himself in a position to play as a true freshmen. So his decision on a his next team won’t be decided anytime soon. In the meantime his goal is to become a Heisman trophy winner.

“That’s always been my goal, to be a true freshmen, I want to win the Heisman and be in the Heisman voting every year I’m in college,” he said.

Dowdell also has his goals set for his senior season. He wants to rush for over 3,000 yards, get close to 40 touchdowns, be named Mississippi MaxPreps Player of the Year again, “And of course a championship again,” said Dowdell.