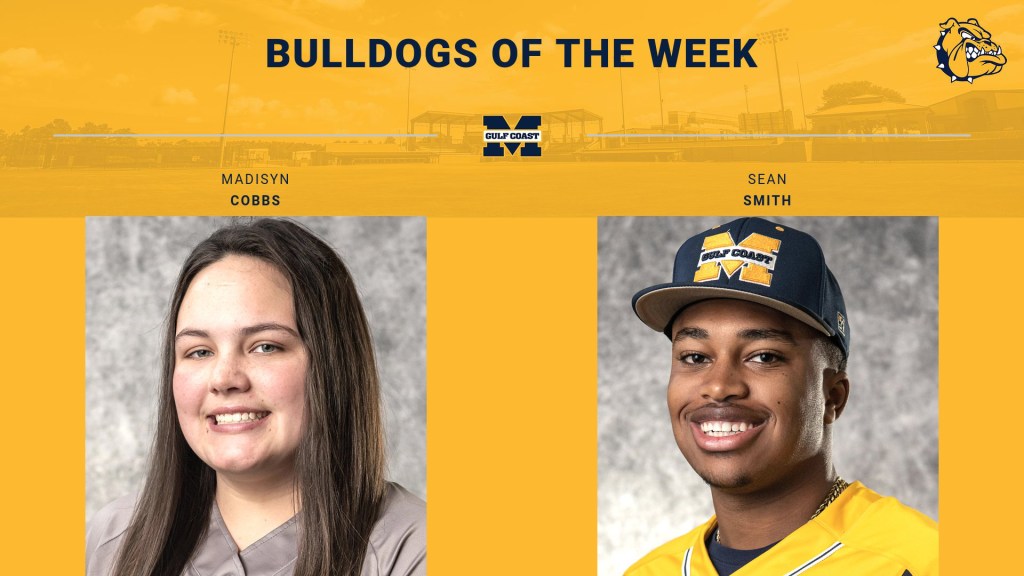 PERKINSTON — Madisyn Cobbs and Sean Smith have been named Bulldogs of the Week for Jan. 31-Feb. 6.

Cobbs, a freshman right-hander from Oxford, went 2-0 for Gulf Coast in the Island Invitational. She struck out 9 in 5 innings to beat Alvin 7-3, and got the win in relief in a 7-4 win over Vernon. She struck out 16 batters in 14 innings and had a 2.00. ERA for the weekend.

Smith, a freshman outfielder from Pascagoula, batted .429 for Gulf Coast as the Bulldogs split on opening day. He went 2-for-5 and scored twice in a 12-5 win over Southern Union. He went 1-for-2 and walked twice in a 15-5 loss to Coastal Alabama-South, finishing the week with a .600 OBP.

Kristian Jones, a sophomore third baseman from Southaven, batted .500 in a 3-2 weekend at the Island Invitational in Pasadena, Texas. She went 3-for-4 with three doubles in a 7-4 win over Vernon and had two-hit games against Alvin and San Jacinto-South.

Luke Reed, a sophomore right-hander from Louisville, Ky., struck out 6 in 4 innings to pick up the win in a 12-5 win over Southern Union. He scattered four hits and allowed one run.

Clay Fudge, a sophomore from Madison, won all four of his matches for No. 15 Gulf Coast. He dropped only seven games in winning a pair of straight-set matches at No. 3 singles and teamed with Pedro Molero to win both No. 1 singles matches.

Tanyaradzwa Kaome, a freshman from Harare, Zimbabwe, won three matches last week for No. 21 Gulf Coast, which went 1-1. She won a pair of thrilling three-set victories at No. 1 singles and teamed with Hayden Hensarling to win their No. 1 doubles match against Itawamba.

Melvion Flanagan, a sophomore guard from Alexandria, La., had 20 points, three assists and three steals in a 74-66 loss at Meridian.