City cameras being considered by Board of Aldermen 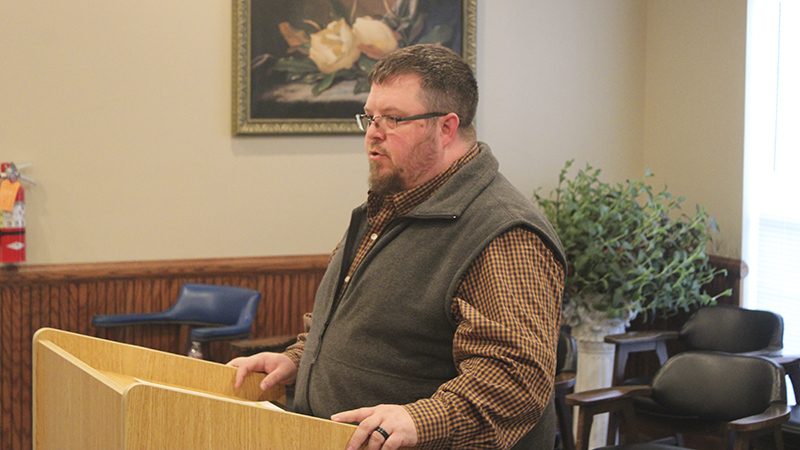 Brian Chatman with Central Pipe Tech Support speaks to the Board of Alderman about the benefits of E-Series Ultrasonic water meters during Tuesday's meeting. Photo by David Thornton Jr.

Public Works Superintended Sam Hale said the city has had significant water loss due to water leakage and his crews need to replace several water meters. Chatman’s presentation consisted of pricing for various meters, their functions, battery life and their availability. The suggested model was t the E-Series Ultrasonic water meter since they give more accurate and faster readings. That discussion was for informational purposes, so no action was take by the Board.

Mayor Louise Smith informed the Board that the Poplarville Historical Museum has reopened and has displays that celebrate Black History Month and there is a special exhibit displaying historical artifacts. The Mayor and Board of Aldermen will participate in the March of the Mayors Program. They will participate with sponsor Extra Table to collect food that will be distributed to food pantries in the Pine Belt.  Every city that participates has a special product for the food collection and Poplarville’s product is a one-pound bag of rice.

Police Chief Daniel Collier and Officer Matt Barnett gave their report regarding the Nola Nation Crime Camera program. Collier and Barnett recently visited the crime center at University of New Orleans and Barnett said the camera system is advanced technology that helped Adams County reduce its murder rate in 2019 down by 92 percent in just nine months.

At the discretion of leaking unwanted information to possible criminals, a description of the camera’s abilities was not released. Project Nola cost $550 per camera with a one-time installation fee estimated to be $550, which will cover the entire year. The Board voted to table the item until the next meeting.

City Attorney Greg Holcomb spoke the Board about the upcoming medical marijuana program, which was established as part of the Mississippi Medical Cannabis Act that was passed on Feb. 2, 2022. The main thing Holcomb told the board is that they have a 90-days to opt out. He noted that the bill has a number of regulations and it referenced some of Oklahoma’s cannabis bill. The deadline to opt out is May 2, 2022. All the information was for consideration so there was not action taken by the Board.

In other business the Board approved the hiring of Malley Bilbo as a part-time firefighter, approved the claims docket in the amount of $121.091.01 and advertised to fill the Deputy Clerk position.