Blue Devils fall to the Bulldogs 5-4 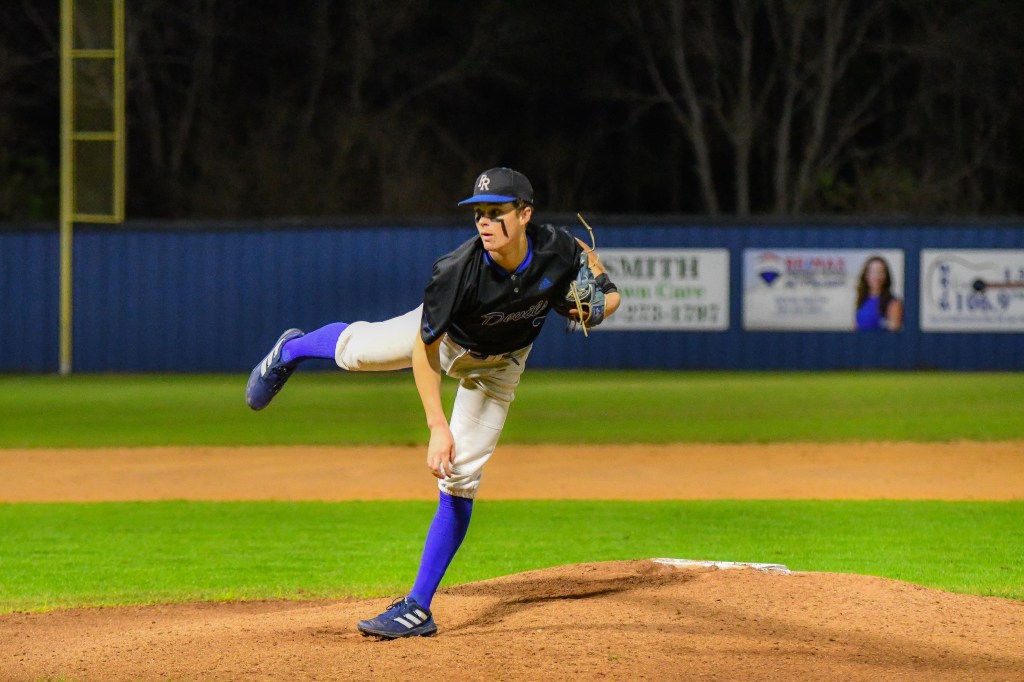 Justin Robinson fires a fastball, striking out a Bulldogs hitter during the Blue Devils' loss to the Vancleave Bulldogs 5-4.

The Pearl River Central Blue Devils baseball team fell Friday night against the Vancleave Bulldogs. The Blue Devils held a 2-0 lead up until the fourth inning where the Bulldogs mounted a comeback.

“I feel like it was one slip away… we have to be able to finish the innings,” said Head Coach Neil Walther.

“I think offensively we were a little bit better. We just left too many people on base, we had eight hits against a pretty good pitcher.”

With the exception of the top of the fourth inning, where the Blue Devils gave up four runs, Walther says his pitchers did a good job.

In the bottom of the second with two outs, a deep hit by Jared Dickens brought two Blue Devils runners in to home.

At the top of the fourth inning, the Blue Devils held a 2-0 lead. With no outs and no one on base, the Bulldogs knocked Justin Robinson’s pitch over the wall for a home run. With the score 2-1 the bases were loaded and the Bulldogs had two outs. A mishandled pitch to the Blue Devils catcher gave the Bulldogs an opening to steal third and tie the game 2-2. The following resulted in a Bulldogs hit up the middle, giving the remaining two-runners time to score. Before the Bulldogs could do anymore damage, Robinson pitched the third strike out. The Bulldogs led 4-2.

At the bottom of the fourth, a bunt by Noland Walther allowed Dickens to score from third base. The Blue Devils only managed to cut the lead down 4-3 before receiving the third out.

At the bottom of the sixth with two outs, a Bulldogs hit allowed their third base runner to score for a 5-3 lead. At the top of the seventh the Blue Devils only managed to score once off a double from Wesley Gardner, putting the final score at 5-4 and capping off a Bulldogs comeback.

Next, the Blue Devils will be on the road to face the East Central Hornets, who Walther says, “has probably the strongest offense in 5A south.” Walther says his team is going to have to apply pressure, and do a lot better job offensively.

“We’re getting better (offensively) but we’re not there yet. I think the pitching is solid, we’re waiting for the defense and offense to catch up.” said Walther.