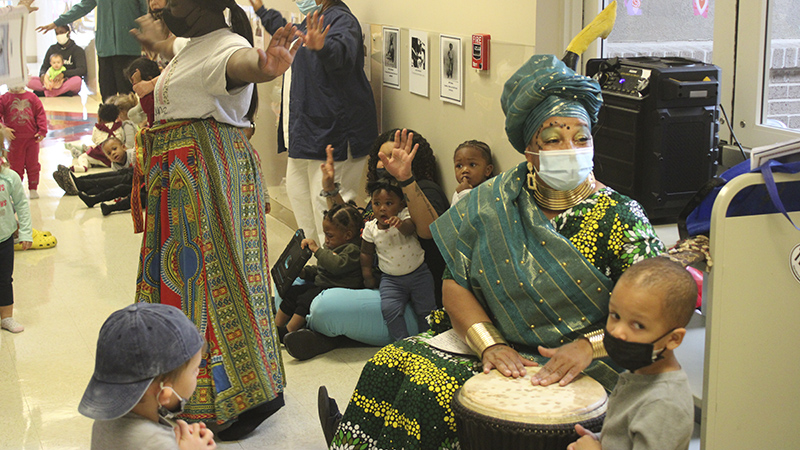 Vinner Scott and Early Head Start student Michael play a drum and dance to the Lion Has a Tail song. Photo by David Thornton Jr.

Scott was welcomed into the school and found a hallway full of children attending Early Head Start.

Scott began her presentation by reading a book entitled Black History Picture Book for Children. The book featured African American heroes like Martin Luther King Jr. and Rosa Parks along with short summaries about their impact on America. Scott told the children about how Rosa Parks she spoke up for things she knew were wrong and what needed to be changed. Scott assured the children that their voices can also lead to change.

“If you don’t like something change it, but it all starts with your attitude,” Scott said.

Scott asked the children to raise their hands if they are a loud talker. After almost every student raised their hand, she encouraged them to use those voices just like Rosa Parks.

“Words can change everything,” Scott said.

Scott then showed pictures of other historic African Americans who changed America, such as Jackie Robinson who was the first African American to play Major League Baseball breaking the color barrier in the sport.

When one student who is fond of baseball recognized the image of Jackie Robinson, Scott let him keep the photograph. She also showed the students a photos of Barack Obama, the first African American President, and current Vice President Kamala Harris, an African American woman.

Scott also told the children about George Washington Carver who was a local scientist who broke through the color barrier. His name was displayed on a public secondary school for colored people in Picayune until the 70’s.

Another person Scott spoke about was J.P Johnson, who was the first principal at George Washington Carver High School until integration took place in Picayune in 1970. His name now identifies a park on Rosa Street.

Simone Manuel was also a topic of discussion and an example of how young people can still make a difference in the world. At 19 he was the first African American to win gold during the 2016 Rio Olympics in swimming. And there is Ginger Howard, who became the youngest Black female golfer to turn professional at the age of 18.