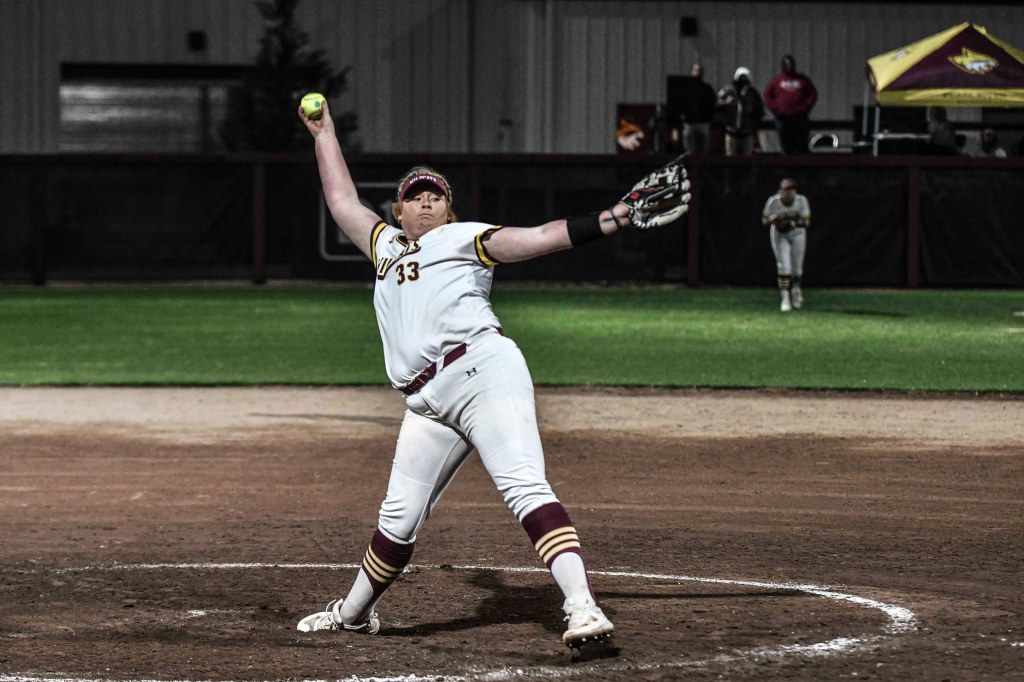 POPLARVILLE, Miss. — The No. 17 Pearl River softball team returned home to Wildcat Stadium for the first time in 2022 on Tuesday, hosting Region 23 rival LSU-Eunice and Lamar State-Port Arthur. After battling to a 1-0 victory over LSPA, PRCC saw a seventh-inning rally come up just short in a 4-3 loss to the Bengals.

“I’m very proud of this group. We’ve been waiting for our hitting to come around and tonight in the last inning I think they realized that what we do every single day in practice they can do out here on the field,” PRCC coach Christie Meeks said. “I was so proud to see us come back in that last inning and battle.”

Brinson Anne Rogers (Statesboro, Ga.) was the story of Game 1. The right-hander made the most of her first start in 2022, striking out 16 over seven complete innings.

Rogers struck out six of the first seven batters she faced to open the contest.

“The vibe before the game was top notch,” she said. “My plan was to go at them and figure out what they can and can’t catch up to.”

Brinson held the Seahawks to just two hits and one walk and did not allow an opponent past first base. The Georgian’s performance was especially notable considering the last time a PRCC pitcher tallied 13 strikeouts was Feb. 11, 2017 when Jacqueline Shows (Saucier; West Harrison) led the Wildcats past Marion Military Institute 4-3.

“Her rise and backdoor were really on and she was able to throw her offspeed stuff, too, to keep the batters off balance,” Meeks said. “That’s a great hitting team. She did a phenomenal job keeping her composure.”

Tuesday’s opener was a true pitcher’s duel. The Wildcats (3-3 overall) finally broke through in the bottom of the sixth inning. Taelor York (Choctaw; Clinton Christian Academy) delivered a one-out single and took second base on the throw. Hannah Miller (Kokomo; West Marion) then singled York home for the game’s lone run.

“Taelor getting on base was huge. That was great heads-up base running. Hannah had a rough couple of at-bats earlier but got herself together and did it for her teammates,” Meeks said. “That’s something we talk about all the time. Don’t do it for yourself or for your coaches, but do it for your teammates.”

The Wildcats and Bengals (4-4) were deadlocked in another pitcher’s battle in Game 2. PRCC worked around solo baserunners in each of the first four innings.

After PRCC was held off the bases through three innings, Miller came up with a timely hit in the fourth by legging out a one-out single.

The Bengals broke through with a solo home run in the fifth inning and then tacked on three more runs in the sixth on two homers.

Dallyn Nance (Nanih Waiya) snapped the shutout bid in the bottom of the sixth inning with a solo home run well over the left field wall. The round-tripper was Nance’s first collegiate extra-base hit.

Aunie Rethmeyer (Belle Chasse, La.) started a late rally effort in the seventh, doubling to the center field wall to score Overstreet from first and split the deficit.

Later in the frame, Nance scorched a ball to the left side that ricocheted away from the Bengals’ shortstop. The hard-hit ball allowed Rethmeyer to score and bring the score to 4-3 but PRCC couldn’t push across the tying run.

“There were so many good things we did at the end,” Meeks said. “We just have to find a way to do them throughout the entire game.”

Brinson picked up where she left off from Game 1, striking out four in two innings of relief work.

“I’m proud of (the pitchers),” Meeks said. “To show the fight that they had early in the season shows us we can continue to push them.”

UP NEXT
The Wildcats have a busy Saturday planned with three games on tap at the Sun Chief Classic in Gulf Shores, Alabama. PRCC plays Marion Military Institute at 1:30 p.m., Southern Union at 3:45 p.m. and host Coastal Alabama-East at 6 p.m. After Saturday, PRCC plays its next six games on the road before returning home March 12 to host Northwest to open MACCC play.

TICKETS
Tickets are on sale now and can be purchased atPRCCAthletics.com/tickets.