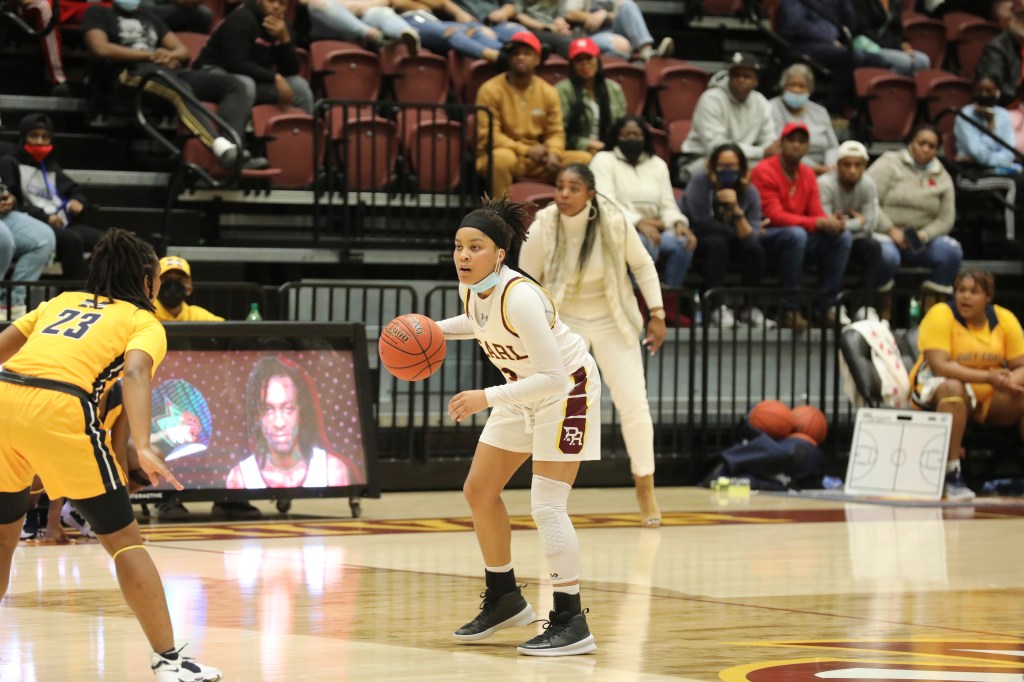 POPLARVILLE, Miss. — The Pearl River women’s basketball team welcomed the Southwest Bears into Marvin R. White Coliseum for Thursday’s matchup of conference heavyweights.
The Wildcats started off red hot and never looked back, routing the Bears 62-42.
“I thought we started off phenomenally, especially after the last two games,” head coach Scotty Fletcher said. “I challenged them after giving up so many points in our last two games because that’s just not who we are defensively.”
FIRST QUARTER
Southwest (10-5 overall; 5-1 MACCC) got things going with a score right from tipoff, but Pearl River (11-4; 5-1) quickly responded with a jump shot from Halle Traylor (Tupelo) and a corner 3-pointer from Otashae Burrage (Carthage; Leake County) that came from a beautiful pass by Ty’Mesha Reed (Meridian). The basket put the Wildcats ahead 5-2.
The Wildcat run was not done there, as Reed hit an open jumper to make the score 7-2.
With the score standing at 12-2 in favor of Pearl River, Keshunti Nichols (Pearl) grabbed a defensive rebound and took it up the court for the smooth coast-to-coast layup, increasing the lead to 14-2 in the process.
After hitting a jump shot of her own, Amaijah Smith (Gulfport) turned provider, hitting Tristen Washington (Gonzales, La; East Ascension) for her first 3-pointer of the night as time expired in the quarter, giving Pearl River a 19-2 lead.
SECOND QUARTER
Southwest again opened the scoring and cut into the deficit making the score 19-5.
After a Nichols free throw, the ball again made its way into the hands of Washington who nailed another 3-pointer, giving the Wildcats a 23-9 lead midway through the second quarter.
Not long after, Smith took the ball up the court for Pearl River and drew the defense inside the paint which allowed her to find Washington open for yet another 3-pointer as Pearl River piled it on, 26-9.
The Wildcats ended the first half with more damage from beyond the arc as Burrage and Anessa Dussette (Houston, Tx.; Manvel) each drained a 3-pointer. The baskets put Pearl River ahead 32-13 at the break.
THIRD QUARTER
The Wildcats picked up right where they left off in the first half, drilling yet another 3-pointer this time from Nichols.
The shot extended the lead to 35-13 early in the second half.
After Reed scored her second basket of the night, she found Nichols open for another 3-pointer, opening the score up even further 40-13.
With 6:58 remaining in the third, Burrage connected on a 3-pointer for Pearl River as the onslaught continued.
After a quick run by the Bears, Marcavia Shavers (Biloxi) fought through contact and converted a layup and the following and-one opportunity, putting the Wildcats on top 46-19.
The Bears ended the half on another small run, but Pearl River still led after the third quarter by a score of 48-28.
FOURTH QUARTER
The fourth quarter was much of the same as Pearl River was able to respond to every Southwest run by continuing the barrage from 3-point land.
Pearl River defeated Southwest by a score of 62-42 handing the Bears their first conference loss of the season.
FROM DOWNTOWN
Washington had a big night for Pearl River, tallying 16 points, 12 of which came from 3-point land.
“I have really challenged her by telling her that the reason we brought her here from a D-1 program was for nights like this.” Fletcher said, “She had really timely shots and I’m really proud of her.”
Burrage had another big night for Pearl River adding 15 points of her own with 12 from 3-pointers.
“I thought Tae was as locked in as she has ever been in her three years here.” Fletcher said, “She was phenomenal in huddles and defensively as well.”
Nichols finished with 15 points and seven rebounds.
UP NEXT
The Wildcats hit the road Monday night to take on Copiah-Lincoln.
The game is set to tip-off at 6 p.m. and can be viewed at colinathletics.com/watch.
For the latest on Pearl River Community College athletics, follow us on Twitter (@PRCCAthletics) and Facebook (PRCCAthletics).