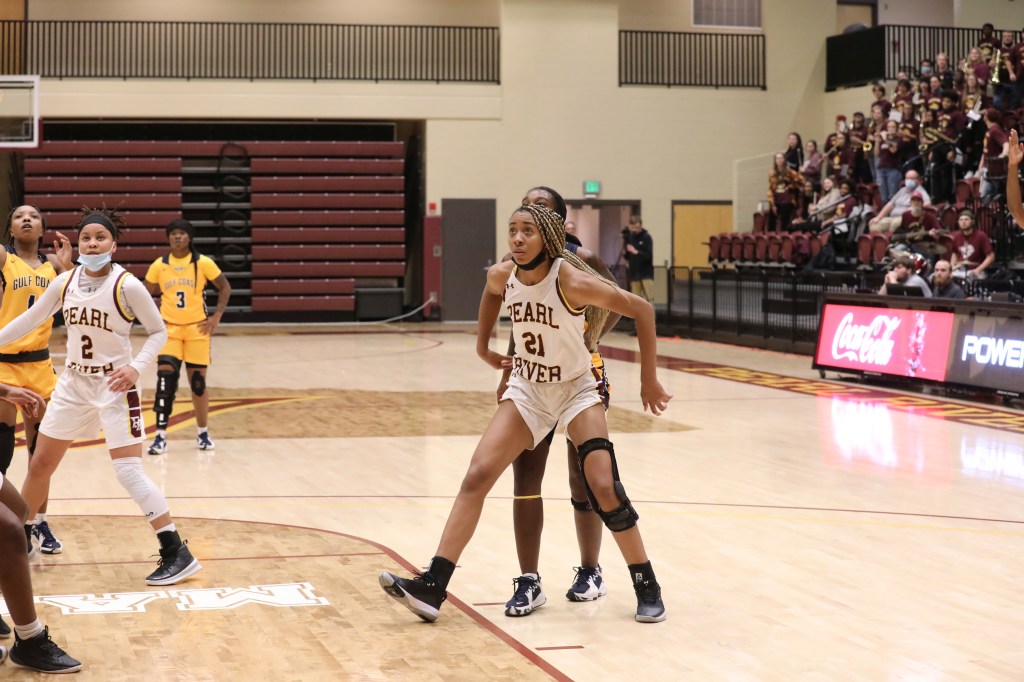 POPLARVILLE, Miss. — The Pearl River women’s basketball team welcomed East Mississippi for Thursday night’s contest inside Marvin R. White Coliseum. The Wildcats used a late-game run to propel them to victory by a final score of 45-42.

“We played an opponent tonight that matched up with us pretty well,” head coach Scotty Fletcher said. “I am really proud of our girls and the way they fought. They really dug deep tonight to get the win.”

Pearl River (14-3; 7-1) responded with a 4-0 run through a Keshunti Nichols (Pearl) putback and Ty’Mesha Reed(Meridian) contact layup, giving the Wildcats the lead 4-3.

After the Lions reclaimed a 10-4 lead, Pearl River again went on a big run started off by a perfect pass from Jaliscia Florence (Tupelo) to Marcavia Shavers (Biloxi) for the layup. Otashae Burrage (Carthage; Leake County) found herself wide open and drilled a 3-pointer, reclaiming the lead for Pearl River 13-12.

Burrage was not done there as she drained another 3-pointer and followed that up with a driving layup, blowing things open 18-12 in favor of the Wildcats.

With time winding down in the first, Pearl River drove up the court and the ball found its way into the hands of Tristen Washington (Gonzales, La; East Ascension) who sunk a 3-pointer at the buzzer, extending the lead 21-12 for the Wildcats.

Pearl River cut the run short through a Shavers jumper from the free-throw line, extending the lead 23-16.

Nothing much changed from that point as both teams played solid defense.

THIRD QUARTER
The third quarter started the same way as the previous two with the Lions opening the scoring and cutting the lead down to one 24-23.

The Wildcats were able to respond as Bryanna Taylor (Terry) fought her way through contact laying it up and in for a 26-23 PRCC lead.

Shortly after, Amaijah Smith (Gulfport) drew a foul and nailed both free throw opportunities, pushing the lead to 28-23.

The Lions captured all the momentum and rode it until the end of the quarter to hold a 35-30 lead heading into the fourth.

FOURTH QUARTER
The Lions continued the trend of scoring first, knocking down a jumper just inside the 3-point line to extend their lead to 37-30.

Pearl River kept up their trend of quick responses as Washington drilled another 3-pointer, cutting the lead to 37-33.

Brandy Scott (Hammond, La) drove into the lane for the hard-fought layup and converted on the subsequent free throw completing the 3-point play opportunity; however, the Lions still led 37-35.

After a Lion basket, Washington hit another 3-pointer and drew the foul, grabbing four total points from one play and tying the game up at 39-39.

East Mississippi reclaimed the lead from the free-throw line, but the Wildcats found some momentum, immediately taking the lead through a Burrage jumper, 41-40.

Anessa Dussette (Houston, Tx; Manvel) converted her free throw opportunities to give the Wildcats a 43-40 cushion late in the fourth.

After a bucket from the Lions, Pearl River found the dagger as Washington hit Shavers for the layup giving the Wildcats a 45-42 lead and eventually the win.

LEADING THE WAY
Washington led the Wildcats in scoring with 12 points.

“She’s in a rhythm right now and I’m very proud of the way she’s responded since the Gulf Coast game,” Fletcher said.

Alesha Temple (Oak Grove) and Shavers were a force for the Wildcats, recording three blocks apiece.

UP NEXT
The Wildcats return home on Saturday afternoon to take on Itawamba. Tipoff is set for 2 p.m.