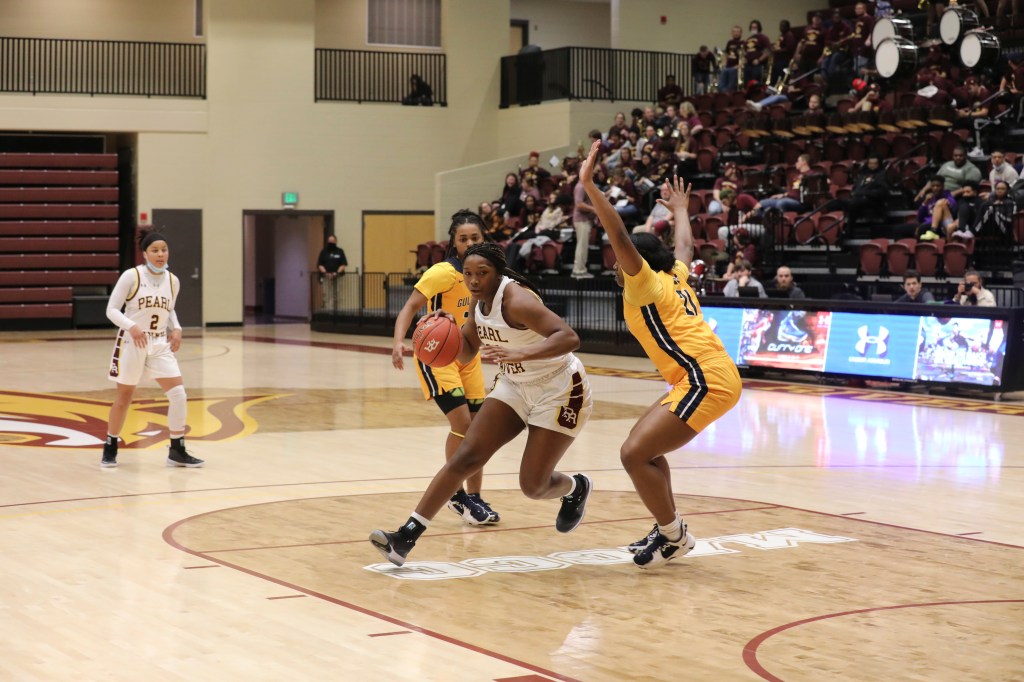 POPLARVILLE, Miss. —The Pearl River women’s basketball team lost its first conference game of the season in Thursday night’s contest against Gulf Coast. The Bulldogs captured momentum late and carried it through to overtime, defeating the Wildcats 80-74.

“I thought the thing we did well in the first half was shoot free throws and take charges,” head coach Scotty Fletcher said. “But the fourth quarter got away from us and they carried into overtime.

“We are going to learn from this. I would rather this happen early on in the season rather than late.”

After another Gulf Coast run put them ahead 10-4, Marcavia Shavers (Biloxi) fought her way through traffic and laid it up and in to halt the run and make the score 10-6.

Ty’Mesha Reed (Meridian) grabbed a rebound and took it coast-to-coast through traffic for the layup, pulling Pearl River to within two at 10-8.
The teams traded scores from there to close out the quarter with the Bulldogs ahead 13-12.

SECOND QUARTER
After a Gulf Coast jumper made it 15-12, Alesha Temple (Oak Grove) grabbed an offensive rebound and laid it up to draw Pearl River within a point at 15-14.

Gulf Coast hit another 3-pointer to put them ahead by four 18-14, but Reed took matters into her own hands converting on back-to-back jumpers tying things up at 18 apiece.

From there, the teams again traded blows eventually playing their way to a 28-28 deadlock.

Pearl River found momentum late in the half and used it to propel them to a 35-32 halftime lead.

THIRD QUARTER
Pearl River used the momentum it found before halftime, starting the second half on the front foot through a Shavers basket, giving PRCC a 37-32 lead.

Pearl River never looked back in the third, closing out the quarter leading by 10 points, 52-42.

FOURTH QUARTER
Pearl River opened the fourth quarter with a sizable lead, but Gulf Coast capitalized on the Wildcats getting into foul trouble and fought all the way back to tie things up at 66-66 as time expired in regulation.

OVERTIME
Gulf Coast had all the momentum as overtime started and continued using Pearl River’s foul trouble to complete the comeback and snatch victory from the jaws of defeat, winning 82-74.

BY THE NUMBERS
Shavers led the Wildcats in points, tallying 14 on the night and was one rebound off a double-double finishing with nine.

Taylor, Otashae Burrage (Carthage; Leake County) and Dussette all finished the night in double-digits with 11 points apiece. Taylor completed the double-double with 11 rebounds.

UP NEXT
The Wildcats hit the road on Tuesday to take on Northwest. Tipoff is set for 5:30 p.m.

The game will be livestreamed at NWCCRangers.com/watch