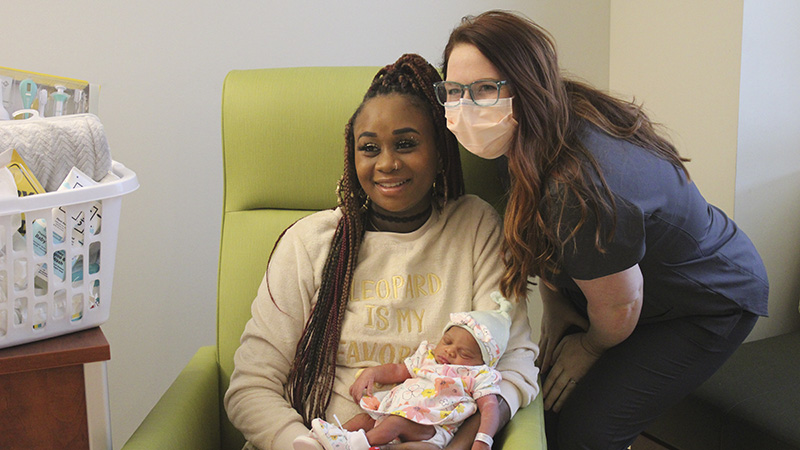 From left are Kekil Ducre holding her new daughter Abby Ducre and Highland Community Hospital Ultrasound Tech Abby Spiers. Abby Ducre was named after Abby Spiers because of her positive interactions with Kekil during her pregnancy. Photo by David Thornton Jr.

Staff at Highland Community Hospital announced that the first baby of 2022, Abby Ducre, has been born at the local facility to Kekil Ducre this week.

Abby will join her five siblings at the Ducre household after a short stay at Highland.

This year’s first child born in Pearl River County might not have occurred, but an interaction with staff at the hospital led to a happy ending for everyone.

“When I first found out I was pregnant with her I had to get an ultrasound, I was planning on having an abortion,” Kekil Ducre said.

Ducre was in a less than ideal place in her life during her most recent pregnancy. She said she didn’t know she was pregnant until the third month and she had little support from her family. To top it off, Ducre and the baby’s father weren’t together and she felt alone.

“It was mainly because she’s my sixth child…when I told my family no one was excited about it. It was just a very hurtful place because I felt alone… I didn’t understand what I wanted,” said Ducre.

That all changed for Ducre when she got her first ultrasound and met Highland Community Hospital’s Ultrasound Tech Abby Spiers. When it was determined that Kekil was having a girl, Spiers was excited for her.

“She was so excited and she was happy,” said Kekil Ducre.

On that day Spiers told Ducre, “This is a blessing for you, I’m so happy for you and congratulations.” said Spiers.

“She made me feel a bit of comfort that I didn’t feel when I first found out I was pregnant,” said Kekil Ducre.

After that interaction, the two got to know each other. Spiers never tried to talk Ducre out of her potential plans for an abortion, but because of Spiers’ positive outlook Kekil Ducre had a change of heart.

“Because of the excitement that she had for someone she didn’t even know it was a beautiful thing for me, and I was like maybe my baby is a blessing and maybe she’ll be a blessing to other people,” said Kekil Ducre.

And from that moment on, Ducre decided not only to keep the baby but also name her Abby because of how Abby Spiers made her feel.

“I felt so much comfort, love and joy at that moment, that I just wanted her to know how much I appreciated to have that empathy, that feeling, that comfort that I needed to get through this pregnancy because it wasn’t easy,” said Kekil Ducre.

Kekil is happy she decided to he keep Abby, even though everything she went through was hard. She had to stop working and move in with family members in Pearl River County with her five other children, but she thanks God that she met Abby Spiers. She also appreciates Dr. Kevin Galloway, who helped get her through therapy and made her feel comfortable.

Kekil also appreciates the efforts of other staff at the hospital.

“My nurse (Carline Hickman) was very comforting, she stood by my side, she helped me breathe because I do have asthma… it wasn’t a hard labor it was easy I only had to push six times and she came,” Ducre.

Tuesday, Kekil was all smiles during her last day in the hospital and she’s eager to see the looks on her other children’s faces when they get to me their new baby sister, Abby Ducre.