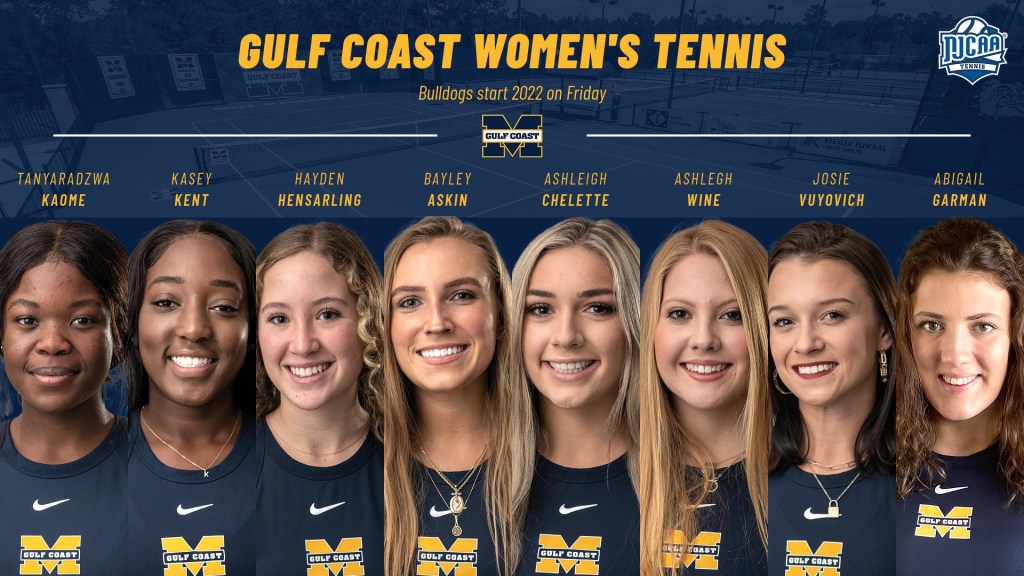 PERKINSTON — Mississippi Gulf Coast tennis coach Sam Blackburn heads into his second season in charge with his first full offseason to get the women’s team ready for 2022.

“Having the fall is big,” he said. “I’ve been able to implement a lot more things that I wish we’d had time to do last year. It makes a big difference, and I get to implement the system that I want to and get everybody on the same page. It’s going to make a big difference as the season goes along.”

The Bulldogs will open the season Friday by entertaining Hinds. First serve is set for 2 p.m., with the match being played at the Wynn Tennis Center in Wiggins. The MGCCC Tennis Complex Courts are being resurfaced.

The Bulldogs have only two sophomores returning from last year’s MACCC and Region 23 runners-up. Kasey Kent (So., Ridgeland/Ridgeland) and Ashleigh Chelette (So., Vancleave/Vancleave) are captains this year. Last year’s squad finished an MACCC-best 12th at the NCAA Championship in Mesa, Ariz.

“They’re a young team, lots of freshmen, but I don’t see that a reason not to win and not to compete to win the conference or region championship,” Blackburn said. “I think we’re capable of that. They’re going to have to come together and play as a team.”

One of the newcomers is Tanyaradzwa Kaome (Fr., Harare Zimbabwe/The Heritage School). She’ll play at No. 1 singles, and she made it to the finals of the ITA Regional in the fall. She’s ranked 22nd in the ITA national rankings, and 11th in Region III.

“Tanya has solidified her spot at the top,” Blackburn said. “She’s a great player. She works hard and hits a great ball. She competes with the guys, which is really cool, too.”

Kent had to stop up into the No. 2 role last year, and the move was good for her game. She’ll play there again this year.

“Kasey played a lot at 2 and 3 last year and held her own and did really well,” Blackburn said. “She got better playing higher up in the lineup last year, and I think she can beat anybody she plays at 2.”

Hayden Hensarling (Fr., Ocean Springs/Ocean Springs) joins Kaome on the 10th-ranked doubles team in Region III. She hates losing, which allows her to focus her athleticism and fitness on battling opponents.

Bayley Askin (Fr., St. Martin/St. Martin) has a sweet demeanor, but she drives opponents crazy by returning shot after shot in her calm manner. She’s likely to start the season at No. 4.

Chelette played at No. 6 last year, and she’s got dibs on No. 5 as of now. She gained valuable experience last year, an advantage for her moving up.

“We’ve got such a deep, strong lineup,” Blackburn said. “We’re going to mix a lot of girls in at 4, 5 and 6. It’s going to be really, really awesome, which is exciting for me as a coach.”

Kaome and Hensarling played doubles in the fall, but Kent has a shot to play at No. 1, too. Blackburn expects to do some experimenting to find his best three pairings.

He thinks Jones, which won the state and region titles last year, to be back as a top rival. Meridian will also be a challenger.

“Last year, we got hot at the end of the season,” Blackburn said. “This year, I want us to start hot and finish hotter. Whether we’re playing a conference rival or Ole Miss, I expect to win every match. But it won’t come easy in this conference.”