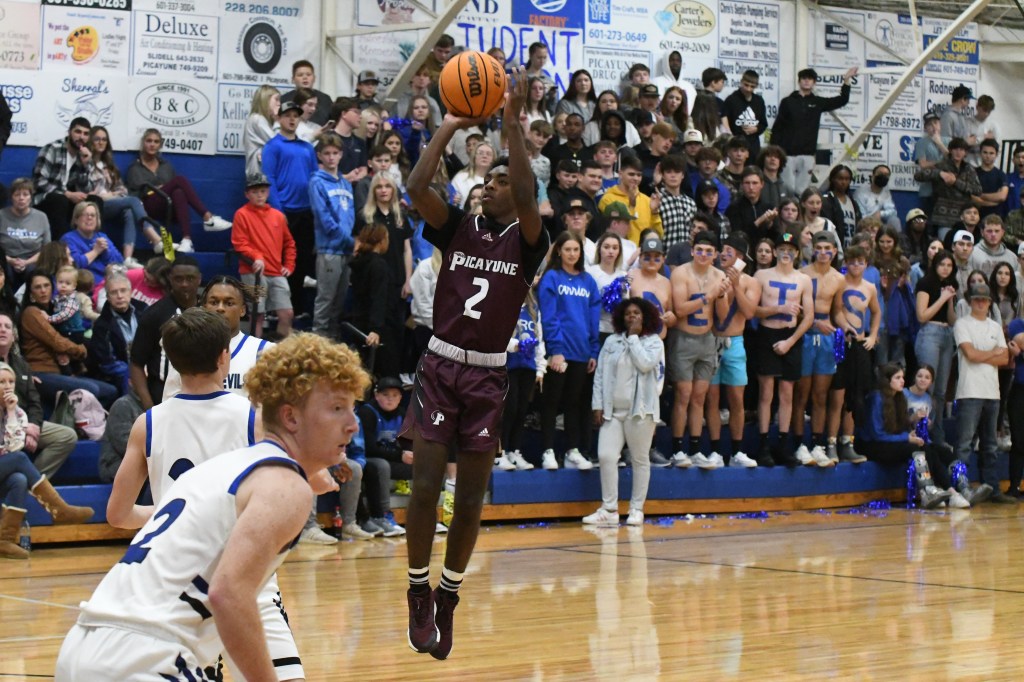 In a district opener that packed the house, the Picayune Maroon Tide beat the Pearl River Central Blue Devils, 57-45 in Friday night’s basketball game. The Blue Devils hosted the Maroon Tide in a game that featured a hyped student section, but it wasn’t enough to beat the fast paced Maroon Tide.

“I thought we were ready to play, thought we played our guts out, it just came down to them (Picayune) making a few more plays then we did,” said Blue Devils Head Coach Scott Stephens. “Good news is where we’re getting beat isn’t a physicality thing or aggression thing… it’s just that we got to make the plays, for most part they (Picayune) made the plays and that was the difference.”

Quarter one was tight. Maroon Tide senior Isaac Brice scored the first points of the game assisted by junior Joshua Holmes. Then, Blue Devils senior Tyce Yarborough grabbed an offensive rebound and scored a contested and-one put back. Yarborough made the extra free throw and gave the Blue Devils a 3-2 lead. The Blue Devils made another trip to the foul line and only hit 1-2 free throws but good defense from sophomore Dinnie Ladner caused a Maroon Tide turnover that ended with a quick fast break point for senior Xion Lockhart. That increased the lead to 6-2.

After a Maroon Tide time out, Brice ended the scoring drought with a two-handed dunk assisted by senior Jaylen Martin. During the next Maroon Tide possession, Brice landed another dunk but this time he was fouled. He missed the extra free throw so the Blue Devils’ lead was cut to 7-6 with three minutes to play in the quarter. Picayune upped the pressure and got into a full court press.

Picayune reclaimed the lead 9-7 after Holmes hit his first three of the night off an assist from junior Troy Carter. After the Maroon Tide got a defensive stop, Brice was wide open for a reverse dunk. But the Blue Devils answered with a three from Ladner. Maroon Tide’s Jaden Hart ended the quarter with a layup off the assist from Brice that put the Tide up 13-10.

In quarter two, the Blue Devils struck first with a three from Ladner, tying the game at 13-13. Picayune’s full court pressure amped up and caused a turnover in the backcourt. Picayune failed to capitalize on the turnover and a Blue Devils player got fouled. Junior Tyran Warren made both free throws and the Blue Devils led 15-13 with six minutes to play in the quarter. Maroon Tide tied the game 15-15 after Martin found sophomore Niquis Ratcliff for a layup. With less than 3 minutes to play, Brice landed his third dunk of the night to extend the Maroon Tide’s lead to 20-17. The Maroon Tide followed by scoring 8 unanswered points and at the end the quarter, Holmes hit an isolation three at the buzzer, giving the Maroon Tied a 28-17 lead.

In quarter three, Brice scored first with a contested dunk over a Pearl River Central defender. Martin then found freshmen Dakeith Quinn on a fast break layup, but the Blue Devils answered back with a layup by senior Heath Brunson. Stephens called a time out as the Blue Devils trailed 32-19.

With 50 seconds left in the quarter, Holmes went into isolation again and hit a three at the top key. At the end of the third, the Maroon Tide led 41-27.

In the final quarter, the Maroon Tide managed to push the lead to 57-37 after Brice finished a fast break dunk. The Blue Devils got in their full court press and came up with a steal and score by Yarborough. The Blue Devils’ press wasn’t enough to break the Maroon Tide’s lead as Picayune went on to win 57-45.

“We were focused, we played hard, and there’s a history behind these two teams, and it’s always an exciting game and both teams played hard. We’re just fortunate to come out with a win and I’m proud of these guys,” said Picayune Head Coach Eric Vianney.

Maroon Tide’s Isaac Brice finished with a team high 20 points. When asked about his performance he said,

“The environment it helped out, it was loud, and I love when it’s loud, I play better that way.”

And with West Harrison up next for the Maroon Tide on Tuesday night, Brice said the win over the Blue Devils, “Will help us, it will help build our confidence, we know what we are capable of now,” said Brice.