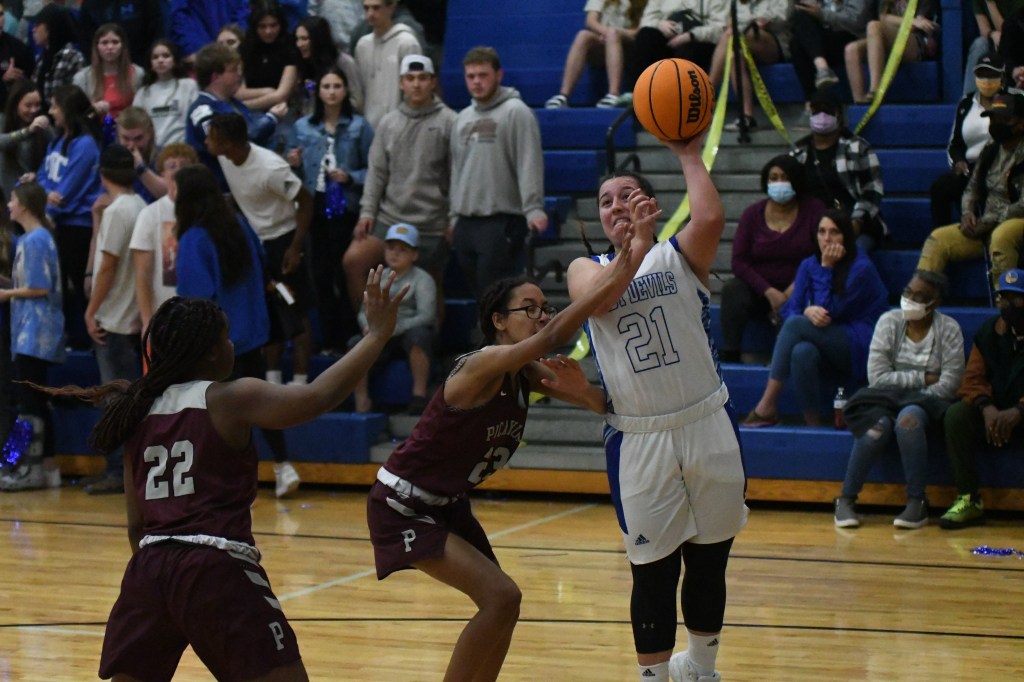 In the second quarter, Lady Maroon Tide’s senior Preciouse Ivy scored a floater. The Lady Blue Devils answered back by going 1-2 at the free throw line then added two points off a Hannah Mitchell jump shot. The Blue Devils then led 26-4.

The lead steadily grew from there. English assisted Mitchell for two, then English scored after fighting for an offensive rebound and put back. Mitchell hit another jumper from 15 feet, pushing the Lady Blue Devils lead to 32-4 with two minutes to play before the break. The Lady Blue Devils ended the half up 34-4.

In quarter three both teams traded points. Mitchell started with an offensive rebound and put back, then Lady Maroon Tide freshmen Raziyah Brown scored a layup, putting the score at 36-6 with 4:30 left to play.

In the final quarter, the Lady Blue Devils scored off the inbounds by Hannah Mitchell and again on a quick fast break resulting in Schandel’s assist to Keene for two points. With less than 4 minutes left, freshmen Adisyn Sanders hit a three pointer to give PRC a 47-6 lead. Then, the Lady Maroon Tide scored the last point off a Brown layup.

“I think they did well… as a team I thought we did what we was supposed to early, and I was pleased,” said Lady Blue Devils Head Coach Cliff Bauer.

Nia Englished finished with a game high of 12 points, Emily Carroll had 9 points (3/3) from behind the arch, and Hannah Mitchell finished with 7 points for the Blue Devils.

Alex Fields and Raziyah Brown were the lone scores with four points for the Lady Maroon Tide.

Next for the Lady Blue Devils will be an on-the-road match against the West Harrison Hurricanes (6-11) on Friday, Jan. 14.

Next for the Lady Maroon Tide will be a home match against the West Harrison Hurricanes on Tuesday, Jan. 11.