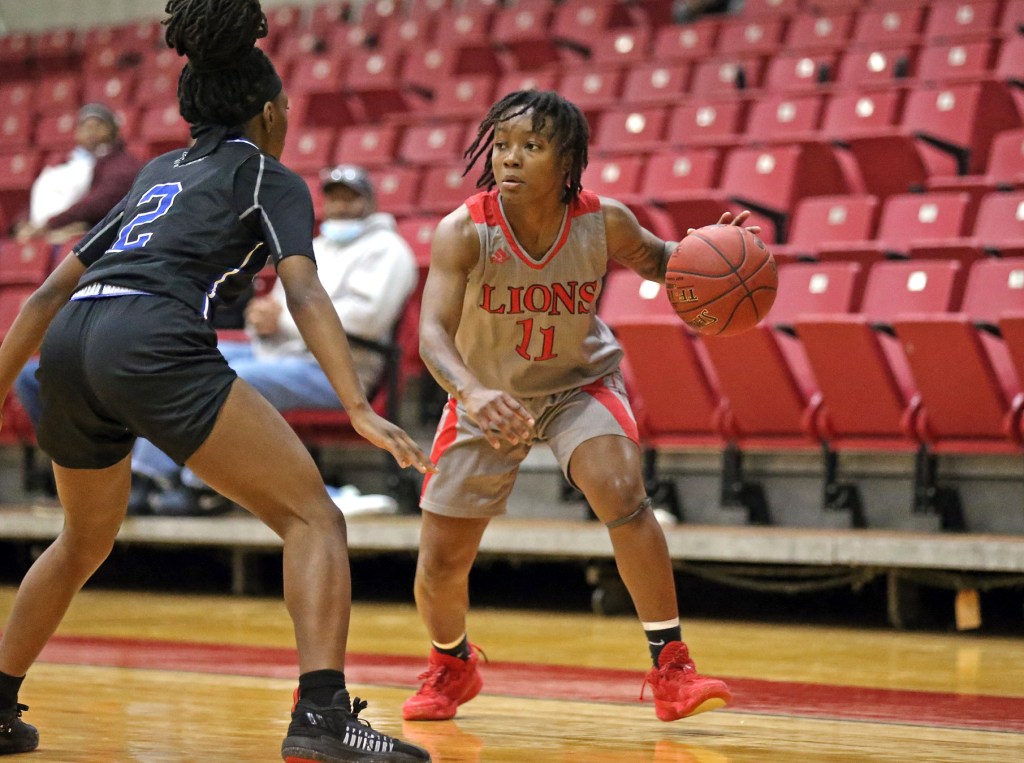 SCOOBA — In a successful return to the hardwood following the semester break, the Lady Lions of East Mississippi Community College earned a 71-65 home victory over Copiah-Lincoln during Thursday’s MACCC women’s basketball action played at Keyes T. Currie Coliseum.
An 8-1 run to close out the opening quarter gave EMCC an early 17-13 lead. Following three ties to open the second quarter, the Lady Wolves scored six unanswered points midway through the quarter to grab a 27-21 advantage. The visitors went on to maintain a slim 33-31 halftime lead.
The third quarter played out in similar fashion, as a pair of early deadlocks gave way to a 45-40 Co-Lin lead late in the quarter. On the heels of a made trey by EMCC’s Shakira Wilson at the 1:20 mark, freshman playmaker DJ Williams’ buzzer-beating three-pointer at the end of the quarter made it a one-point game (47-46) and gave the Lady Lions plenty a momentum heading into the final 10 minutes of play.
Consecutive baseline drives to the rim by Kyunna Thomas and Markiema Lancaster to open the fourth quarter put EMCC in front by three points. Later in the quarter, the two teams traded baskets during a five-minute span that saw the lead exchanged on eight straight scores. That streak ended when Williams’ three-point play on a drive to the basket put the Lady Lions in front (63-61) for good heading into the game’s final two minutes.
After Lancaster’s fourth bucket of the quarter extended EMCC’s lead to four points with 34 seconds left on the game clock, the Lady Lions closed out their first win of the new calendar year by hitting six free throws over the game’s final 25 seconds.
Coach Sharon Thompson’s EMCC Lady Lions improved to 5-6 overall and 2-1 in MACCC play, while the Co-Lin Lady Wolves dropped to 6-5 overall and 0-2 within the conference.
Williams, a freshman from Columbus, paced a trio of EMCC double-digit scorers with a season-high 19 points on 6-of-10 shooting from the field. Off the bench, Lancaster finished with 15 points (5-7 FGs & 5-6 FTs) along with totaling seven rebounds, three assists and three steals. Wilson added 14 points for the winners.
Co-Lin’s Aniya Sanders led all scorers with 20 points on 10-of-13 accuracy from the field.
Tandria Minor followed with 10 points off the bench for the Lady Wolves.
East Mississippi’s basketball teams are scheduled to return to action on Thursday (Jan. 13) against Holmes Community College. The EMCC women are slated to travel to Goodman for a 6 p.m. tipoff at Frank Branch Coliseum. Head coach Billy Begley’s 9-2 and 16th-ranked EMCC Lions, whose scheduled Jan. 6th game at Copiah-Lincoln was postponed due to COVID-19 concerns, are set to play host to the Holmes Bulldogs in a 6 p.m. men’s contest at Keyes T. Currie Coliseum on the Scooba campus.