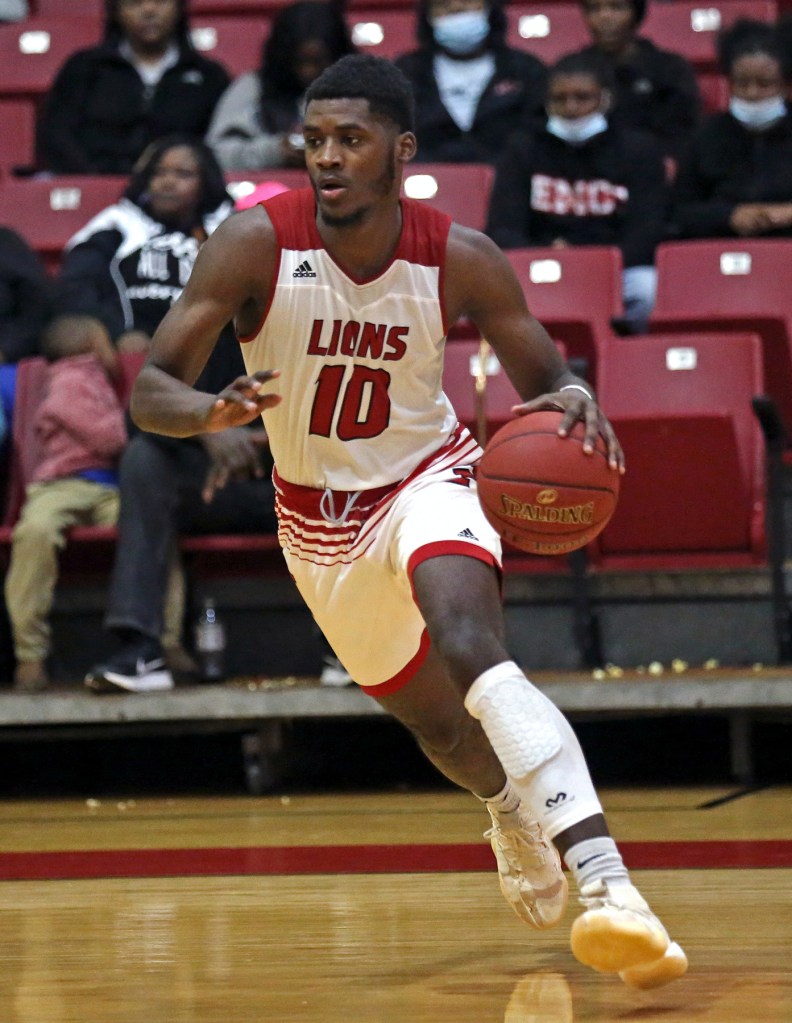 In their first game action in a month, the 13th-ranked EMCC men extended their current winning streak to seven consecutive games with Thursday’s narrow triumph over Holmes at Keyes T. Currie Coliseum. The Lions’ most recent competition had been Dec. 13 with their 61-56 road win over then-No. 16 Shelton State prior to the semester break. Last week’s postponement of EMCC’s scheduled Jan. 6 road game against Copiah-Lincoln is set to be made up Saturday (Jan. 15) afternoon in Wesson.

During their 2022 playing debut, the Lions trailed for most of the first 13 minutes against Holmes. After reclaiming the lead late in the opening half, EMCC owned a slim 37-35 edge at the halftime break.

The Lions maintained their advantage throughout most of the second half, extending the margin to as many as 11 points (61-50) by the 5:47 mark when Blake Butler scored nine straight EMCC points during a two-minute stretch.

EMCC continued to hold a double-digit lead (63-53) after two more free throws by Butler, before the Bulldogs went on an 11-1 run over the final three minutes of regulation to tie the game. A couple of inopportune turnovers and a shot clock violation by the Lions down the stretch helped contribute to Holmes scoring the last nine points of regulation to send the contest into overtime.

The Lions were able to regroup following regulation and proceeded to score the first five points of the extra session on a Butler three-pointer and Kevin Henry’s full-court drive to the rim. EMCC maintained the lead throughout overtime, though the Bulldogs were able to cut the final deficit to a basket with Caleb Campbell scoring five of his team-leading 29 points during the game’s last eight seconds.

Coach Billy Begley’s EMCC Lions improved to 10-2 overall and 3-0 in MACCC play with their seventh consecutive win dating back to Nov. 18. Butler led all scorers with a career-high 31 points on 9-of-16 shooting from the field, including 5-of-11 from beyond the three point arc, and 8-of-8 accuracy from the charity stripe. Brandon Deravine followed with a season-high 13 points off the EMCC bench, while Henry and Nick Walker added 10 points apiece for the winners.

Dropping to 5-9 overall and 1-4 within the conference, Holmes was led by Campbell’s 29 points. Jordan Brister followed with 17 points off the bench for the Bulldogs on 4-of-5 three-point shooting.

In women’s action played at Frank Branch Coliseum in Goodman, the visiting Lady Lions never trailed during the contest. Shakira Wilson’s three-pointer closed out the first-quarter scoring with EMCC on top, 19-9.

On her way to 14 first-half points, Wilson opened the second quarter with her third trey and finished off the first-half scoring with a full-court drive to the rim to enable EMCC to double up the Lady Bulldogs, 32-16, by the halftime break.

The Lady Lions maintained their comfortable double-digit lead throughout the second half, though Holmes managed to trim the deficit to 14 points a couple of times during the third quarter on baskets by Sha’Toria Vigne.

EMCC’s margin grew to as many as 22 points (58-36) on Jada Odneal’s fourth-quarter triple en route to the visitors settling for the 18-point road victory to improve to 6-6 overall and 3-1 in MACCC play.

Coach Sharon Thompson’s EMCC Lady Lions were led by Wilson’s 18 points on 7-of-11 shooting from the field. Kyunna Thomas registered her seventh double-double of the season with 15 points and 12 rebounds, while Siarra Jackson approached a double-double with eight points and 10 rebounds for the winners.

The Holmes Lady Bulldogs fell to 1-13 overall and 0-5 within the conference. Vigne topped all game scorers with 23 points on 9-of-13 shooting from the floor.

East Mississippi’s basketball teams are scheduled to take on the nationally ranked Jones College teams on Tuesday (Jan. 18). EMCC’s Lady Lions will play host to the 11th-ranked Jones women in Scooba, while the No. 13 EMCC Lions will travel to Ellisville to meet the 14th-ranked JC Bobcats in men’s action. Both contests are slated to tip off at 6 p.m. 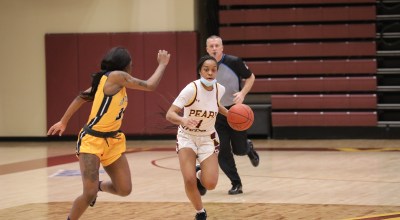