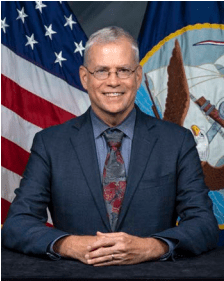 January 21, 2022 — Dr. William Burnett is the new director of NOAA’s National Data Buoy Center — a division of NOAA’s National Weather Service. As director, he is ensuring the nation’s maritime safety by successfully operating the world’s largest real-time marine observation network. The network includes moored-ocean buoys, fixed coastal stations and mobile observing platforms operating in the open-ocean and coastal zone around the world that observe, report and disseminate atmospheric, oceanographic, climate and tsunami measurements. The NDBC is located at the Stennis Space Center along the Mississippi Gulf Coast.

“Bill brings to the National Weather Service a wealth of experience and leadership in marine meteorology and oceanography, and interagency and international activities,” said National Weather Service Office of Observations Director Tom Cuff. “His ability to build partnerships will be beneficial to expanding our marine observation network and ensuring the National Data Buoy Center continues to deliver valuable buoy data to the public.”

Previously Dr. Burnett served as the Technical Director to the Commander, Naval Meteorology and Oceanography Command. In that role, he provided technical direction and oversight for a fleet of six survey ships, and 2,000 civilian and military personnel. Dr. Burnett also served as a Computational Technology Area Leader in Climate, Weather and Ocean for the Department of Defense’s High Performance Computing Modernization Program.

Before joining the National Weather Service in 2004, Dr. Burnett was the Plans and Programs Division Head at the Naval Meteorology and Oceanography Command. In 1992, he joined the staff of the Naval European Meteorology and Oceanography Center in Rota, Spain, and served as the Oceanographic Services Officer where he developed a new data exchange system that provided products and observations to the Fleet during Operation Provide Promise/Deny Flight.

Dr. Burnett began his career in 1985 as a physical science aide and storm chaser with the Storm Electricity Group at NOAA’s National Severe Storms Laboratory in Norman, Oklahoma. In 1988 he joined the Naval Oceanographic Office as a meteorologist at the Operational Oceanography Center.

The National Data Buoy Center provides observations in the marine environment in a safe and sustainable manner to support operational and research programs at NOAA and other organizations and the understanding of and predictions to changes in weather, climate, oceans and coast.