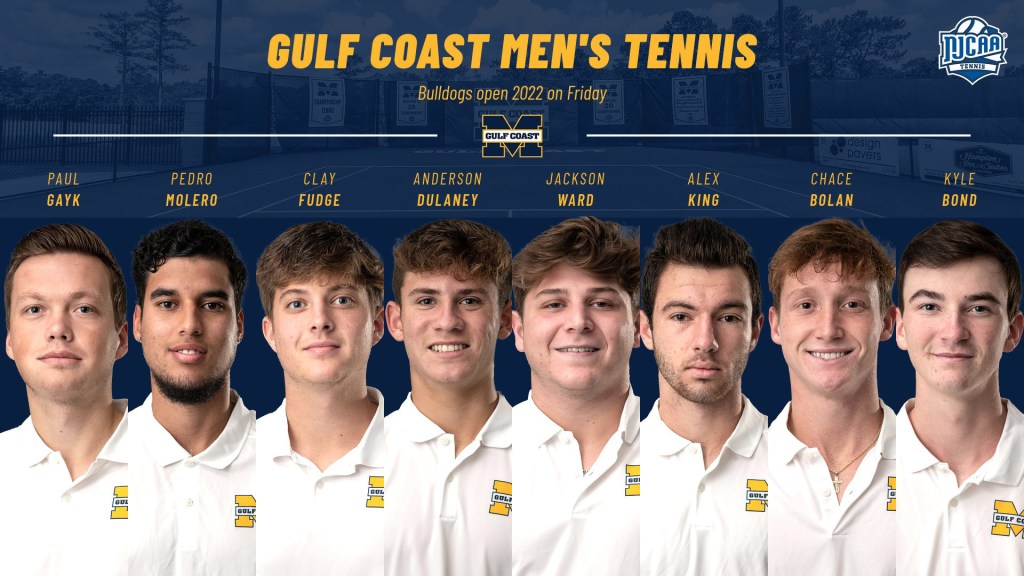 PERKINSTON — The Mississippi Gulf Coast men’s tennis won the MACCC and Region 23 titles last year, and a huge chunk of that team returns for 2022.

“I’m expecting a lot from the men with the depth, the maturity and the experience we have,” Bulldogs coach Sam Blackburn said. “We’ve got a phenomenal group of young men who come to practice every day ready to play. They’re working really hard. I never have to get on them about giving effort.”

The Bulldogs will open the season Friday by entertaining Hinds. First serve is set for 2 p.m., with the match being played at the Wynn Tennis Center in Wiggins. The MGCCC Tennis Complex Courts are being resurfaced.

Captains for this year’s squad are Clay Fudge (So., Madison/Madison Central) and Jackson Ward (So., Gulfport/Gulfport). They were on the court for the championships, as well as the 16th place finish at the NJCAA Championship in Plano, Texas.

There’s a new No. 1 in the lineup Paul Gayk (Fr., Muelheim an der Ruhr, Germany/Berufskolleg Lehnerstrasse) steps in atop the lineup, and he’s ranked 50th by the ITA in singles and 20th in Region III.

“Paul Gayk is our freshman, German warrior,” Blackburn said. “Whatever he’s doing, he’s quiet and not putting a lot of emotion to it, but he’s doing it 100 percent. He’s always competing with the guys on the track to win a mile run or a 400 or finish first in sprints on court. Nothing changes when he’s actually playing, and he makes his teammates better with that competitiveness. It rubs off on the other guys.”

Pedro Molero (So., Maracaibo, Venezuela/U.E. Instituto Americano Joseph John Thomson) is back at No. 2 singles. He made it to the NJCAA Championship consolation finals there last year, and Blackburn has worked with him on his approach.

“He came in a year ago and made an immediate difference,” Blackburn said. “To have him for the full fall semester has been amazing. Pedro can beat a lot of good players when he’s bringing it mentally.”

The coach said the players battling for the No. 3 spot have been fun to watch compete against each other. Fudge and Anderson Dulaney (So., Long Beach/Long Beach) bring impressive credentials from last year. Fudge didn’t lose to an in-state opponent last year, and neither did Dulaney.

Ward didn’t even drop a set in conference play, and he will be in the lineup battle at Nos. 5 and 6 with Alex King (So., Ocean Springs/Ocean Springs), Chace Bolan (Fr., Laurel/Northeast Jones) and Kyle Bond (Fr., Wiggins/Stone).

Molero and Fudge were undefeated in the conference at No. 2 doubles, and they’ll be the Bulldogs’ No. 1 team this year. Gayk and Anderson are quiet but deadly together, and they’ll be at No. 2.

Bond and Bolan won the B-draw doubles title at the ITA Regional in the fall, but Blackburn has a number of options at No. 3 he’ll tinker with as the season cranks up.

“The conference is going to be strong,” he said. “Jones and us were the top two last year. It may be that way this year, but it’s not a given. It’ll be stronger and deeper this year, but we want it to be tough. It’ll be a grind, which makes holding that trophy at the end of the year that much sweeter.”