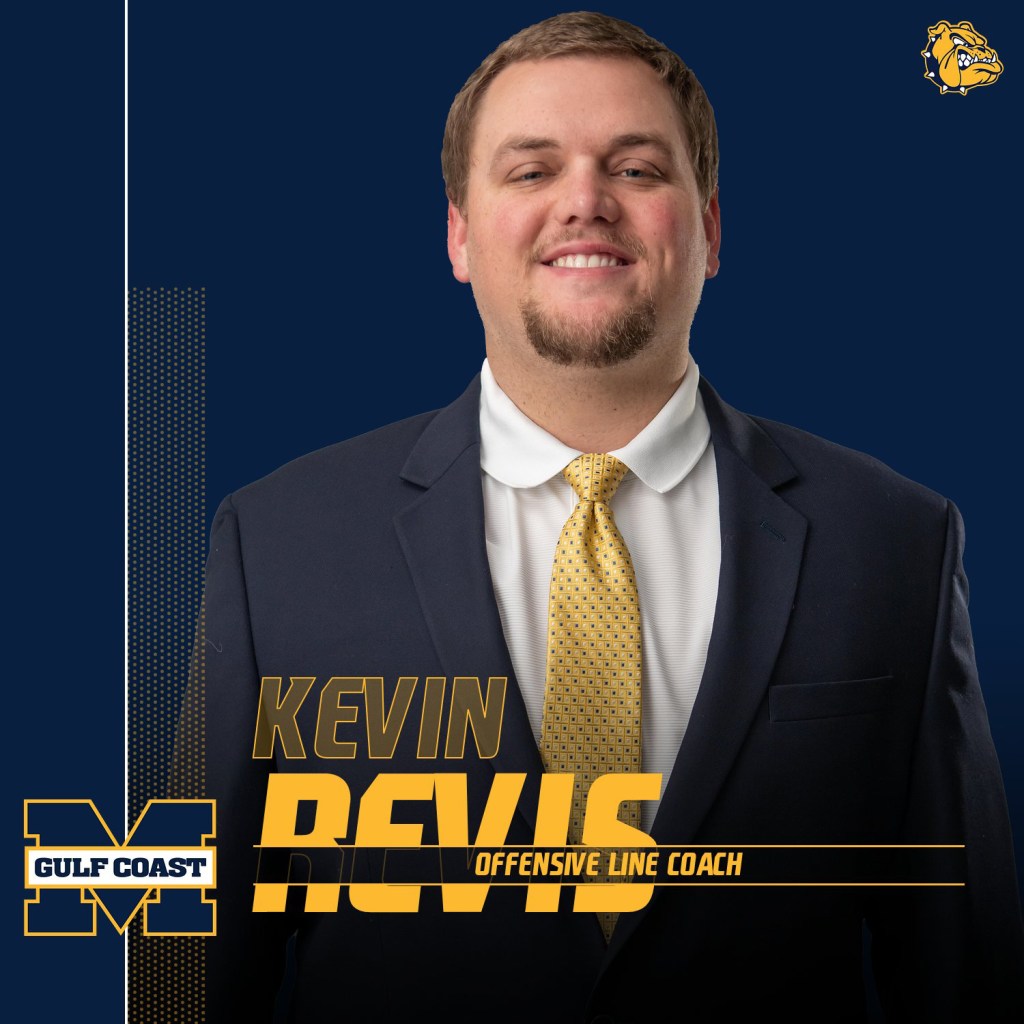 PERKINSTON — A culture of winning and the tradition of sending outstanding offensive linemen to the Next Level have brought Kevin Revis to Mississippi Gulf Coast.

Head coach Jack Wright has hired another coach to his staff who is no stranger to winning. Revis takes over as offensive line coach after serving in the same role at Jacksonville State.

“The winning tradition is a reputation a lot of people have heard of, and obviously I’ve heard of it,” Revis said. “The tradition of offensive linemen coming out of here and the level of players who have come from here is really something special to be a part of.”

The start of his coaching career has been filled with championships. In eight seasons at Jacksonville State, the Gamecocks won six Ohio Valley Conference titles. He spent his first two seasons as a graduate assistant assigned to the O-line, then took over as one of the youngest coaches with that position in Division I with great results. All five starting linemen earned All-OVC honors in each of his first two seasons in charge, something that had only happened twice in OVC history going back to 1948. In 2015, four of the five First-Team All-OVC linemen were from JSU.

Since 2016, Revis coached six FCS All-Americans. From 2016 to the 2021 spring season, JSU had 18 All-OVC O-linemen selections and they added an All-ASUN winner in the Gamecocks’ first season in a new conference.

“I’m proud to have Kevin on staff,” Wright said. “He brings years of Division I experience. I know he’ll be able to improve our offensive line through his work with them every day. He’s an experienced recruiter and developer of offensive linemen, and we’re just excited he’s onboard here with us.”

BJ Autry, who was a senior on the 2018 team, earned a spot in the Senior Bowl and would later sign with the Seattle Seahawks. Two players from the 2017 offensive line (Justin Lea and Dylan Cline) were invited to NFL camps.

Revis, who is originally from Dayton, Tenn., played high school football at Rhea County High School where he was a finalist for Tennessee’s Mr. Football as a senior. He earned All-State and Region 4-4A Offensive Lineman of the Year awards before signing with Tennessee. He was named to the SEC Academic Honor Roll in 2009. After two years with the Vols, he transferred to Chattanooga and started for the Mocs for three seasons. He was team captain and First Team All-Southern Conference as a senior, when UTC won its first conference championship since 1984.

“Getting to know Coach Wright and the other coaches, it was obvious this place is really is special,” Revis said. “The facilities and administration, the players and coaching staff this place has, it’s a really nice place.”

Revis has a bachelor’s degree from Chattanooga and a master’s from Jacksonville State. He and his wife Patterson have a daughter, Miller, who is 2. They’re expecting a son, Chatt, in March.