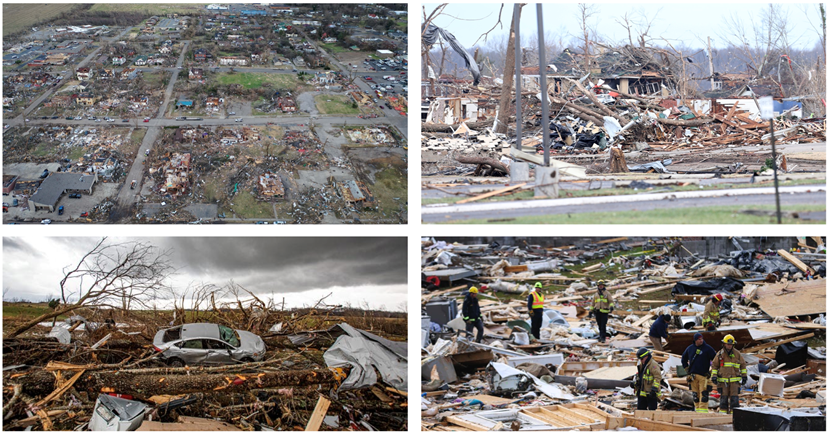 Governor Andy Beshear of Kentucky captured the essence of the tornadoes experienced across at least five States late Friday and early Saturday when he said, “It’s devastation like none of us have ever seen before.”

This weekend, the nation experienced the deadliest U.S. tornado outbreak in a decade with over 75 confirmed deaths and search and rescue operations still underway.

Forecasted storms battered the South and Midwest Friday night into Saturday. That’s not unusual.  On average, about two dozen tornadoes form in the continental U.S. each December, mostly in the western Gulf Coast and lower Mississippi Valley. But, as meteorologist Jason Samenow reported in the Washington Post, “History is replete with examples of devastating December tornadoes. But the tornado rampage from Arkansas to Illinois on Friday night and early Saturday morning rose to another level, unlike anything seen in modern records.  In particular, the violence and longevity of the tornadic storm that crossed four states, from northeast Arkansas to western Kentucky, was unusual for December or any time of year, if not unprecedented.”

Complicating matters, displacement, and power and communications outages coupled with pre-existing deficits in broadband (the purple areas below) mean that on-the-ground in-person outreach will be critical to finding and serving those with the greatest needs.

​And, make no mistake: the needs will be great.  As you can see from the photo montage below, those living in the affected communities will literally have to rebuild their lives.

Even as storms continued through mid-day Saturday, Red Cross responders in Regions from Arkansas to Illinois were delivering mass care services while Red Cross volunteers from around the country were deploying to the hardest hit areas.  We quickly established three Disaster Relief Operations (DROs) across three Divisions (Central Atlantic, Southeast and Caribbean, and Southwest and Rocky Mountain).  Our operational center of gravity is in Western Kentucky at DR 466-22, which is a Level 5 response initiated by Regional Disaster Officer Nickki Salladay and her team.  Kentucky Regional Executive Steve Cunanan raced to hard-hit Mayfield, Kentucky, where workers on the night shift at Mayfield Consumer Products were making candles for the holiday rush when a powerful torndao reduced the building to rubble killing at least 8 people.  Meanwhile, DR 467-22 in Tennessee and DR 468-22 in Missouri/Arkansas were likewise responding to dozens of calls for assistance.  Indeed, since the tornadoes struck, we’ve recevied hundreds of calls for assistance in the affected areas, especially from those seeking shelter and financial assistance.

Over 300 people are in more than a dozen congregate shelters in across Kentucky, Arkansas, and Tennessee, and we expect that number to grow over the next few days, especially as more severe weather decends later this week.

Below you’ll see a photo of Nassi Jafarri speaking with American Red Cross volunteer Richard Peters in the Red Cross-managed Jennings Creek Elementary School shelter (Bowling Green, KY). Nassi is holding her 9-month-old infant daughter Edvige while her twin brother Samuel sleeps in a crib close by. About a year ago Nassi arrived to Bowling Green, Kentucky as a refugee from the Democratic Republic of the Congo (DRC). “Coming to the US, I could not imagine a disaster like this,” she says. “Although our building wasn’t tornado damaged, I could see through my window neighbor’s homes that were”. Nassi’s building lost power. It houses many African refugees from Rwanda, Somalia, Burundi and the DRC that are being welcomed and resettled in Bowling Green. Until power is restored to their building she and her neighbors from the building are staying at the American Red Cross managed shelter at Jennings Creek Elementary School in Bowling Green, Kentucky. This is not the first time Nassi has been witness to the good work of the Red Cross. She remembers that when she was a refugee in a camp in Burundi she saw the Red Cross there working to reunite children with their families who were separated as a result of conflict, disaster, migration or other humanitarian emergency.

Nearly 300 Red Cross responders (like Richard Peters above) and over two dozen Emergency Response Vehicles are on-the-ground or en route to our three DROs.  When disasters of this magnitude strike less than two weeks before Christmas, survivors and clients can feel especially hopeless.  Many agencies, landlords, and offices will close over the holidays, and that inevitably slows down and complicates transition from congregate shelters and other related social services.  Consequently, we expect to have guests for the holidays and through the month of January, so we will take very, very good care of those guests.  We and our clients are fortunate the President has declared a Major Disaster for Kentucky (with all the accompanying resources and partnership) and that so many of our partners like FEMA, State Emergency Management, County Emergency Management, World Central Kitchen, the Salvation Army, Catholic Charities, Americares, Baby2Baby, ULAC, Operation Hope, the NAACP, National Baptist Convention USA, Children’s Disaster Services, Omega Psi Phi, and other diverse partners are present or virtually supporting the affected communities.

​Most of this update has focused on Mass Care.  Sadly, however, because of the fatalities these tornadoes have caused, a Mass Fatality response is also required.  Adrian Grieve, one of our most experieced Mass Fatality experts, will lead our Integrated Care Condolence Teams (ICCT) for DR 466 in Kentucky.  An ICCT is composed of caseworkers, disaster mental health, disaster health services, and/or disaster spiritual care responders, who focus on providing timely and effective information, assistance, and support to responders, survivors, and families of the deceased, and others who may have been directly or indirectly impacted by the event.

​Over 45 counties in five States are reeling from these devestating, and, once again, nearly unprecedented tornadoes. Many of those affected are in small towns, rural areas, and among socially vulnerable populations.  Public facilities, businesses, and residences have been badly damaged and destroyed. We’re all about to begin our third year in the COVID pandemic (through which we continue to operate safely). Communities and clients will have a long road to recovery and the American Red Cross will be there.

The Red Cross is not accepting donations of food, clothing, toys or household goods as they cannot be distributed by our teams.  Tornado victims are getting food, shelter, health and mental health support, emergency supplies and emergency financial assistance from the Red Cross and additional assistance from our partners, but there are few storage areas or available workers to unload, inventory, store and distribute other unsolicited supplies.  Financial donations are the quickest and best way to get help to those who need it most and it gives them the flexibility to purchase what they need. If you want to ensure your donation is designated to this tornado relief, write “Southern and Midwest Tornadoes” in the memo line of your check.

You can help with a donation of blood and/or a financial contribution.

To make your financial donation: