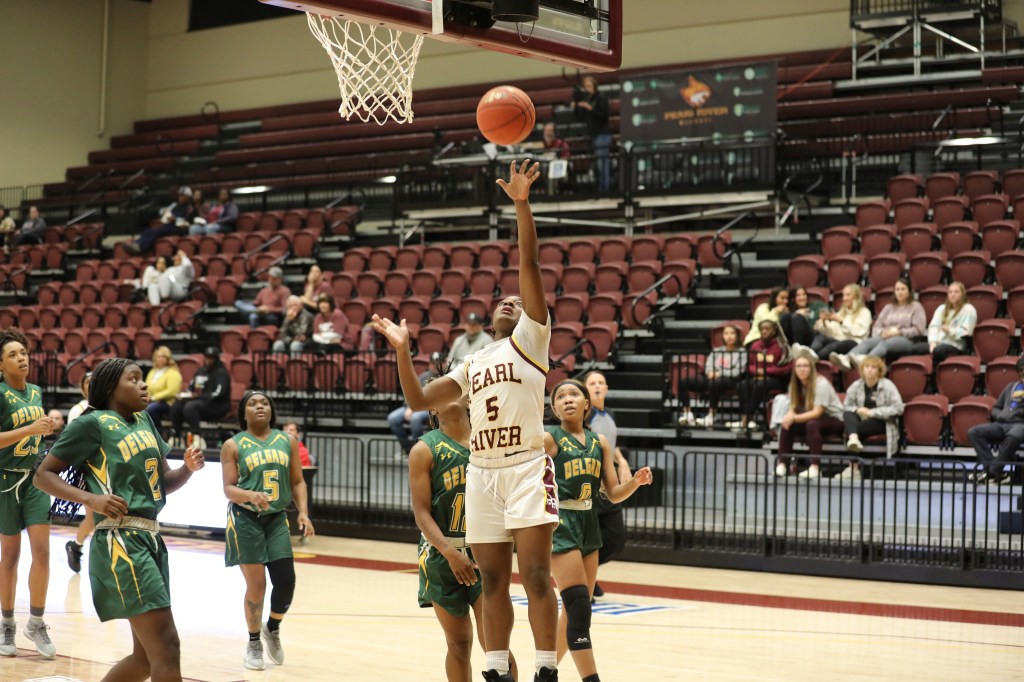 POPLARVILLE, Miss. — The Pearl River women’s basketball team continued its red-hot start to the year in Tuesday night’s contest, defeating Delgado 89-33 inside Marvin R. White Coliseum.
The win was the Wildcats’ largest margin of victory since they defeated Coastal Alabama-North 98-40 in the 2019-20 season.
“We allowed our defense to create offense.” head coach Scotty Fletcher said, “This team has a lot of potential and ability.”
FIRST QUARTER
The Wildcats (7-0 overall) came out of the gate hot, opening up an impressive 10-0 lead. Gabby Collier (Brandon) faked out two Delgado (3-6) defenders to drain a 3-pointer, making it 13-2 and giving Pearl River all of the momentum.
The Wildcats capitalized on the opportunity and went on another run that included a 3-pointer from Gabby Collier (Brandon) and an Anessa Dussette (Houston, Tx; Manvel) jumper out of a spin move blowing things open 22-2.
Pearl River closed out the quarter leading 24-6.
SECOND QUARTER
The second quarter opened up with some flair as Dusette threw a dime to Collier for the easy layup giving the Wildcats a 26-6 lead. After a 3-pointer from Tristen Washington (Gonzales, La; East Ascension), Pearl River held a commanding 34-6 lead.
The Dolphins went on a late run, but it wasn’t enough as the half closed with Pearl River leading 41-16.
THIRD QUARTER
The third quarter of play opened with Burrage converting all three free throw attempts after being fouled.
Shortly thereafter, Keshunti Nichols (Pearl) hit a three of her own making the score 47-16.
After a quick-fire two from the Dolphins, Marcavia Shavers (Biloxi) grabbed on offensive board and put it back up for the layup giving Pearl River a 49-18 lead.
A series of 3-pointers from Washington and Collier, coupled with free throws from the latter and Alesha Temple (Hattiesburg; Oak Grove) saw the Wildcats dominate the middle part of the third quarter closing things out with a 68-23 lead.
FOURTH QUARTER
Jaliscia Florence (Tupelo) and Brandy Scott (Hammond; La) opened the fourth with coast-to-coast layups putting Pearl River up 72-26.
The Wildcats continued to play lock-down defense and were never threatened, winning comfortably by a score of 89-33.
STATISTICALLY SPEAKING
Scott led the way offensively for the Wildcats tallying 14 points and adding on two rebounds.
Collier added 13 points including three 3-pointers, pushing her season total to 19.
Nichols was a force on the glass for Pearl River grabbing nine total rebounds three of which came on the offensive side of the ball.
UP NEXT
The Wildcats play host to East Central on Thursday night in Marvin R White Coliseum to open MACCC play. Tipoff is set for 6 p.m.
TICKETS
Season and single-game tickets are available now and can be purchased at PRCCAthletics.com/tickets.
TUNE IN
All home Pearl River basketball games are livestreamed for free at PRCCMedia.com/gold. Fans who have Roku, Amazon Fire or Apple TV devices can also watch the Wildcat broadcasts by downloading the “Pearl River CC” channel from their app stores.
Games can also be heard on WRJW 1320-AM, 106.9 FM and WRJWRadio.com.
For the latest on Pearl River Community College athletics, follow us on Twitter (@PRCCAthletics) and Facebook (PRCCAthletics).