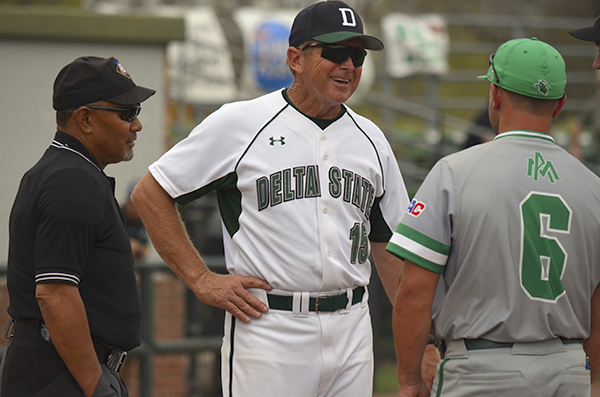 POPLARVILLE, Miss. — The Pearl River baseball team is set to kick off the 2022 campaign with its sixth annual First Pitch Dinner on Saturday, Feb. 5 at 6 p.m.
Pearl River coach Michael Avalon announced Mississippi Sports Hall of Famer and current Delta State Athletic Director Mike Kinnison will be the guest speaker.
“Coach Kinnison is one of the greatest coaches in our games history, and it is an honor to have him as our guest speaker,” Avalon said. “No question, it will be a treat for all in attendance to hear from such a great ambassador for the game of baseball.”
The dinner will be inside the Olivia Bender Cafeteria on PRCC’s Poplarville campus. The doors will open at 5:30 p.m. for the silent auction.
Tickets are $30 for adults and $15 for children 12 years old and under.
“We are excited about the upcoming spring season and our annual First Pitch Dinner is a tremendous night to get the season started,” Avalon said. “This is a special night for our players and their families as we introduce this team to our fans and community.”
ABOUT KINNISON
Kinnison, a Benton native, was a four-year starter and letterman during his high school days at Benton Academy. He went on to play at Holmes Community College before transferring to Delta State. During his two-year career at Delta, he amassed several honors at shortstop. He was named to the all Gulf South Conference and All-South and South Regional team teams in 1978, as well as an ACBA 2nd team All-American.
His head coaching career began at Lee Academy where he coached for three years from 1979-1981 before moving on to Jackson Prep. At Prep he won three MPSA class AAA state championships in ‘82, ‘90, and ‘91 as well as winning the Clarion-Ledger Metro Coach of the year award 1987.
He took over at Delta State in 1997 where he etched his name into legend. During his tenure he won a multitude of awards that included an ACBA National Coach of the Year and a Division II National Championship in 2004. He was inducted into the Mississippi Sports Hall of Fame in 2011. He currently holds the position of Director of Athletics at Delta State.
HOW TO ATTEND
To RSVP for the banquet, email Avalon at mavalon@prcc.edu.
For the latest on Pearl River Community College athletics, follow us on Twitter (@PRCCAthletics) and Facebook (PRCCAthletics).

Lady Blue Devils bounce back with win over Poplarville