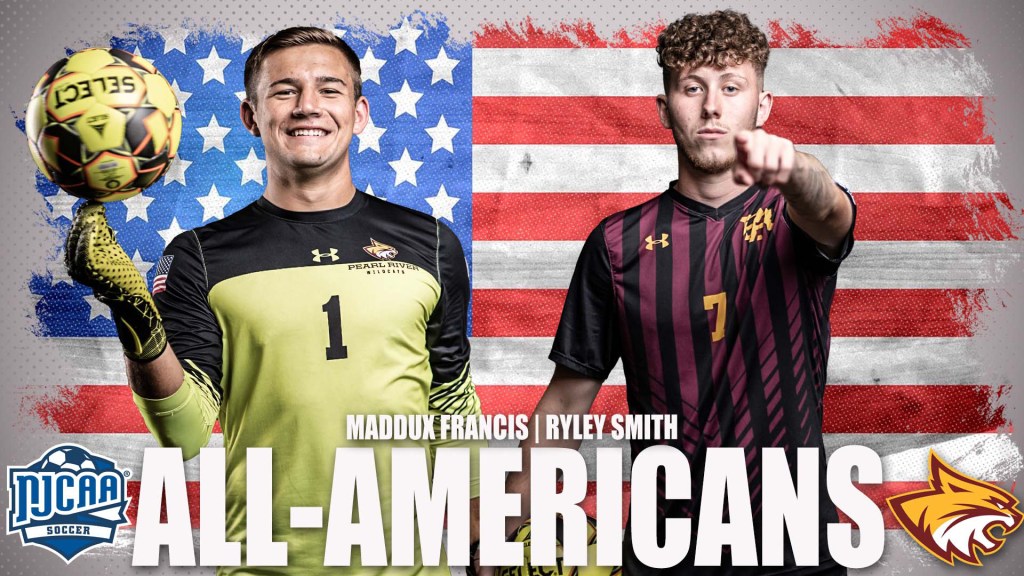 POPLARVILLE, Miss. — Pearl River men’s soccer’s Ryley Smith (Manchester, England.; Castlebrook) and Maddux Francis (Poplarville) get to add yet another piece of hardware to their trophy cabinets after recently being named to the National Junior Colleges Athletic Association All-America team.

Smith was named a Second Team All-American and Francis was named to the Third Team.
RYLEY SMITH
Smith lands the NJCAA honor after already being named First Team All-MACCC, All-Region 23 and United Soccer Coaches All-American.
The creative midfielder was a major reason that the Wildcats netted 43 goals on the season.
His seven assists tied for the team lead and he chipped in five goals which placed him third on the team.
“Ryley is a very talented player that has put in the work on the field,” Pearl River coach Drew Gallant said. “He poses a threat to every team we face. He earned this award through his hard work, and it is well deserved.”
Smith was proud to have won the award
“It was a goal of mine at the start of the season to become an All-American,” he said. “I sacrificed a lot and worked hard towards this so being able to achieve it is a proud feeling.
Smith was quick to give recognition to his teammates.
“I owe it all to my teammates,” he said. “They have been incredible day in and day out. They motivated me to be better on and off the field. I am very thankful for that, and they deserve just as much recognition.”
MADDUX FRANCIS
The homegrown talent showcased his skills all year long, leading the Wildcats to be the best defensive team in the NJCAA and earning First Team All-MACCC and All-Region 23 selections.
Francis finished the season with an astonishing 68 saves and just seven goals allowed. His seven goals allowed, 0.44 goals-against average and .907 save percentage each led the country.
“I’m sure most of the coaches around the country were surprised to see just how talented that Maddux is,” Gallant said. “He is constantly trying to improve his game and is never satisfied. While he had a great season this year, we expect even bigger things from him next season.”
Like Smith, Francis was thrilled about the award but gave the honor to his teammates.
“It’s another dream fulfilled,” Francis said. “But this recognition isn’t for me. It’s for the entire defense who have won these awards all year long.”
For the latest on Pearl River Community College athletics, follow us on Twitter (@PRCCAthletics) and Facebook (PRCCAthletics).