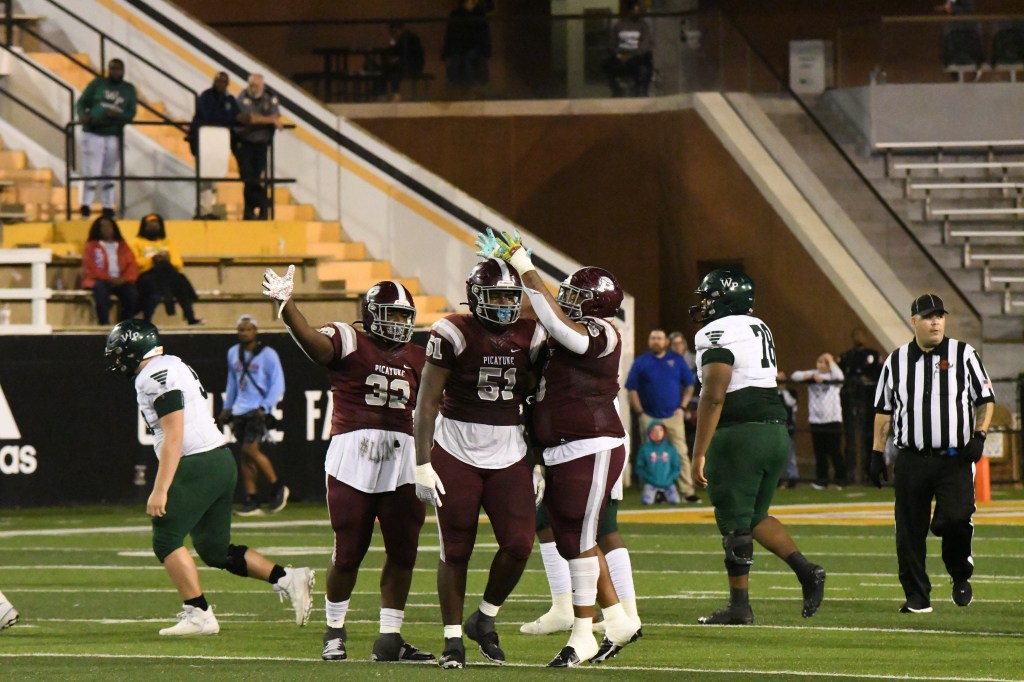 The Maroon Tide football team achieved its goal of winning the 2021 5A State Championship, beating the very team that prevented Picayune from bringing home that title two years ago, West Point’s Green Wave.
The Maroon Tide finished the 2021 season with respectable 14-1 record; the team’s only loss occurred during a matchup with D’Iberville’s Warrior in early November. Since then the Maroon Tide rode an uphill wave, racking up 11 straight wins. During the big game held on Saturday on the grounds of the University of Southern Mississippi, Picayune faced a then undefeated team in the West Point Green Wave, coming out victorious in the end with a score of 40-21.
“Looking back from game one to where we are now, there was a lot of talk saying this was going to be a down year for us, and that we’re rebuilding. In some areas we were picked fourth in the district, but we knew all along that if we got better each week we can be a lot better than what those people were saying. Going week to week and seeing the progression of this football team and how much better they have gotten every week was just phenomenal,” said Head Coach Cody Stogner. “I want to brag on my coaching staff for getting these players in the right positions and also brag on the players taking the coaching and doing what they were asked.”
The Maroon Tide set the goal of winning a state championship very early, all the back to the preseason. The Maroon Tide football program instilled a mindset of winning football games and playing the best every week. Seeing that goal come to fruition brought out a great feeling for everyone involved.
“It’s the best feeling, that’s what you play for, we play for championships and we play to be the best,”
“This 2021 version of Picayune will go down in history, they proved a lot of people wrong, they did everything right,” said Stogner
Winning a state championship has yet to sink in for the Maroon Tide’s players. But when it happened, it was a indescribable moment for the player and coaches.
“I didn’t know it was going to happen this quick,” said Sophomore Jamonta Waller.
“It don’t feel real right now,” said Senior Dekecyion Jones.
Waller and Jones were key players for the Maroon Tide defense this season. On the year, Jones made 98 total tackles 58 solo tackles and forced two fumbles.
Next for Jones will considering which college to become part of the football program and call home.
“Being in Picayune, there’s a tradition in winning, we had lost to the Green Wave my sophomore year and going back there this year, the only thing on my mind was to win,” said Jones.
“We got revenge this time,” said Junior Dante Dowdell.
Dowdell ran for 2,555 yards and had 28 touchdowns on the year.
The Maroon Tide’s last state championship win occurred during the 2013 season.
“We haven’t won one in eight years so it’s just awesome to bring it back to our community,” senior Dawson Underwood said.
Underwood has plans to play college baseball, so now that football season is over, he’ll be gearing up for the upcoming Maroon Tide baseball season.
As the Maroon Tide’s quarterback, Underwood threw for 395 yards and three touchdowns this season.
The Maroon Tide’s players had a chip on their shoulders all season, due to the negative feedback they received all season.
‘They thought we wasn’t going to win the first game and our last game, they thought we was going to lose it all, but we proved them wrong this time,” said Dowell.
That motivation to prove the Maroon Tide football program was the best in the state drove each player to want to get better every week.
“We wanted to prove them wrong every week,” Underwood said.
Jones’ favorite moment over the course of the season was being the first to hold up the gold ball after beating the Green Wave.
“It felt legendary,” he said.
Dowell’s favor moment was being named MVP of the state game.
For Waller, it was the surreal moment of being a champion that hit him toward the end of the game.
“When I realized there was two minutes left, that feeling started hitting me that I’m really about to be a champion.”
Underwood’s said his favorite moment of the season was Picayune’s Final Four win over the Laurel Tornadoes.
“We were down 17 points in the start of the fourth quarter, we came back and won the game, and that really opened my eyes that we’re really tough,” he said.
To Waller, he realized his team could bring home a championship title after the Maroon Tide beat George County 59-33.
“That game really woke me up,” he said.
Jones said the late safety in the game against the Laurel Tornadoes solidified his belief that Picayune is the best team in the state.
“That was the game changer right there,” said Jones.
Dawson, Jones, Waller and Dowdell thanked God for putting them and the team in the position they’re in and gave praise to their coaches and the rest of their teammates for coming together as a family during this season. The four also easily agreed on one word to describe their season,
“Underdogs” they all said.