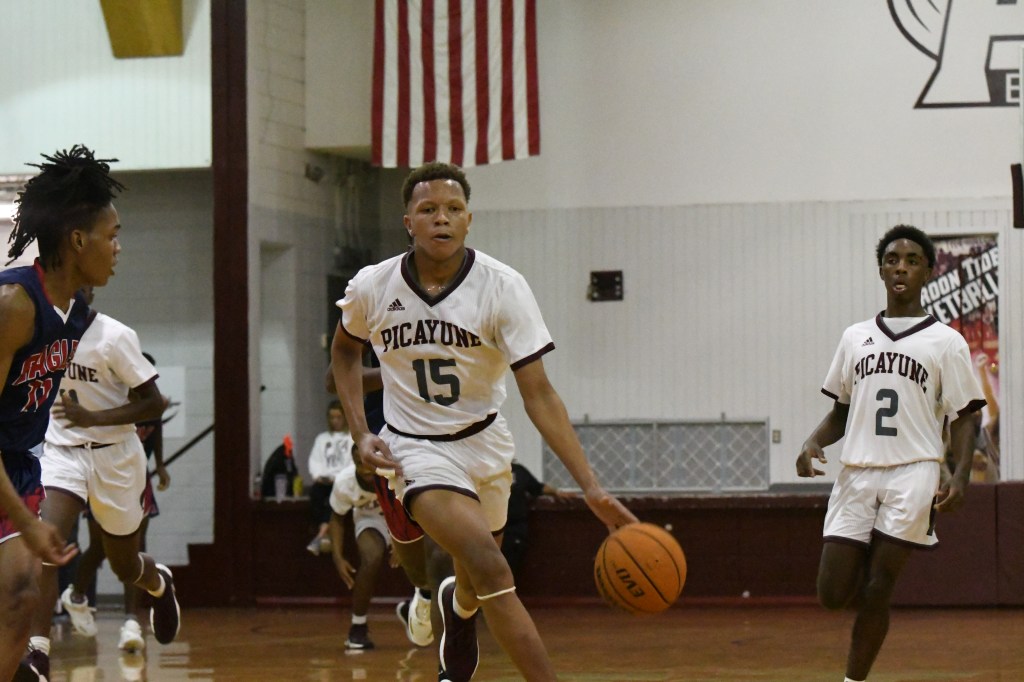 The Picayune Maroon Tides boy basketball team started and finished strong in Tuesday nights 66-34 win over the East Marion Eagles.
In the quarter the Maroon Tide gained a sizable 18-0 lead. They were causing turnovers and creating easy layups and opens threes. They ended the first quarter up 25-6.
The Maroon Tide lead 31-10 with under fives minutes to play after junior Jaheim Everett dishes to senior Isaiah Ramsey the for an easy layup. The Maroon Tide ended the quarter on a 6-0 with help from an Everett layup and Ramsey pull up jump shot.
After the halftime break sophomore Niquis Ratcliff opens up the quarter with two points making it a 39-10 Maroon Tide lead. The Eagles would hit back-to-back threes to answer, and Senior Issac Brice would grab an offensive rebound and put back for the Maroon Tide inching their lead a little further. Half way through the third quarter the Maroon Tide led 47-20.
Junior Tyran Warren makes a great pass to sophomore Jaden Hart for an easy two. The Eagles answer with a corner three from Malcolm Simmons. The Maroon Tide would end the quarter on a 6-0 run and lead 58-23.
In the final quarter sophomore Jaden Davis would take two trips to the free-throw line and go 2-4. He would later a three and make it a 63-30 lead. And to cap off the night Davis goes coast-to-coast for a layup with under one minute to play.
Statistically, Troy Cater led all Maroon Tide scorers with 11 points, Brice had eight, Davis had seven, and Josh Holmes, Everett and Ramsey each had six.
Head Basketball Coach Eric Vianney had the opportunity to go deep into his bench early and play a lot of his young player late in the game.
“We just wanted to come out and stay discipline and get better on defense and learn how to trust each other,” He said.
“We got fortunate to get up on the score…we gave a chance for some of those who don’t get to play every night to get in, it’s a team win and I’m happy that they found a way to stay focus and make it happen,” said Vianney.
As the Maroon Tide team moves to 7-4 on the season, they’ll be at home for their second of four home game stretches, against the Petal Panthers Friday night on Dec. 17.