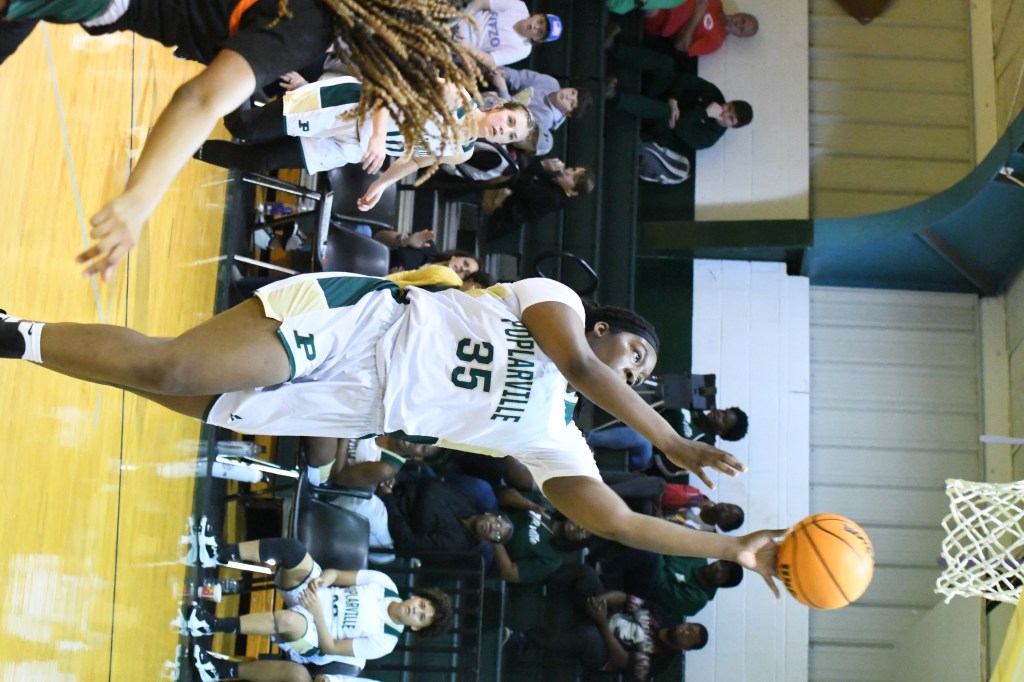 The Poplarville Lady Hornets beat the West Harrison Hurricanes on Friday night with a score of 52-42 and snapped a three game losing streak. The Lady Hornets, down 32-31 in the fourth, out scored the Hurricanes 20-9 for their third win of the season.
“We have sort of been doing that all year, hanging around and hanging around, we just haven’t been able to finish, and tonight we finished with some kids that contributed. Some of our starters were on the bench with foul problems but other kids came in and did some great things for us,” said Poplarville girls basketball Coach Steve Willey.
In the first quarter, senior Kiara Young scored the Hornets first field goal down 7-4. The Hurricanes ended the quarter up 11-5.
The Lady Hornets hustled in the second quarter, forcing two turnovers and scoring five unanswered points, three of which came from the free-throw line. The Lady Hornets took their first 12-11 lead after junior Avory Travis converted for an and-one foul in transition.
The Hurricanes shot 1-2 at the strike and tied the game 12-12 with five minutes to play. They made it to the strike again and Jaylen Applewhite knocked both free throws and retook the lead for the Hurricanes. The Hurricanes ended the half on an 8-4 run, up 24-16.
In quarter three, the Lady Hornets made a 7-1 run from sophomore Ta’Meah Bester’s three pointer, then Young’s open jump shot, followed by Bester’s fast break layup. They still trailed 25-23 halfway through the quarter. The game stayed tight as it went into the fourth quarter 32-31.
In the final quarter, Young scored off an assist from Bester and the Lady Hornets took a 33-32 lead. After the Hurricanes went 1-2 from the strike, Travis answered with a three and go up 36-33 with six minutes left. A player for the Hurricanes was fouled and made 2 at the strike but Travis was also fouled and converted an and-one shot for a 39-35 lead.
The Hurricanes tied the game up at 39-39 with four minutes to play. Down 40-39 with 2:30 minutes left, Travis scored 4 unanswered points to give Poplarville the lead 43-40. But the Hurricanes knocked down two free throws.
Travis followed up for the Lady Hornets by going on another scoring run, landing nine straight for a 52-42 win over the Hurricanes.
Avery Travis finished with 26 points and two assists for the Lady Hornets.
Next the Lady Hornets (3-9) will be on the road to play the South Jones Braves (3-7) on Dec. 28.