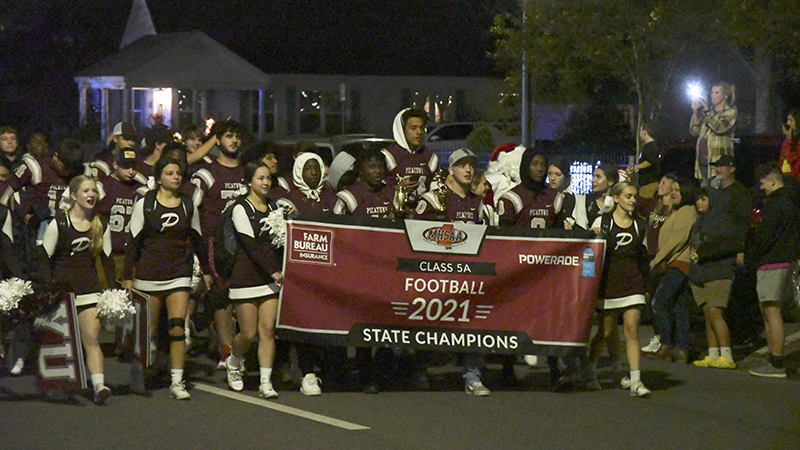 The Picayune community was loud and proud through the event. Head Coach Cody Stogner was presented with the key to the city by Mayor Jim Luke during the event and the members of the band, cheerleaders, and dance team were recognized for their support in the team’s effort all season. During the event, each player was called up to receive a certificate commemorating their achievement of becoming the 5A state champions.

The night was all about celebration, but the football program doesn’t plan to sit on the glory for too long. They have a quick turnaround as preseason workouts are now underway with the same goal in mind, to win another state championship next season.

“It’s a great feeling, the excitement has not worn off yet, we’re just absorbing it and taking it all in, but now I think the celebration is getting ready for playing for next year,” said Assistant Coach Seth Hayden.

“We’re ready to go to work tomorrow. It’s a great feeling, not only for us, but for the city, the kids, but for everybody,” said, Assistant Coach Tyler Smith.

“We go to work tomorrow, back to the weight room,” said Assistant Coach Mark Summers.

Maroon Tide’s sophomore guard Quinton Haynes and junior left tackle Gage Thibodeaux are both players who will have bigger roles in next year’s run for another championship. Being state champions has not completely sunk in for them, so they’re humble about the situation and are ready to get back to work.

Thibodeaux said he loved the support the community provided after winning a championship.

“It was great, I feel awesome. It almost feels like we won a national championship,” said Thibodeaux.

As the Maroon Tide begin workouts, Thibodeaux is “super excited,” for the next season.

Those sessions include maxing out bench presses and recording 40 meter times, picking up right where they left off and Thibodeaux loves the grind.

“ Winning a championship gives us a boost and the confidence that we can do it again,” Thibodeaux said.

In order to have a repeat of this year during the coming season, Thibodeaux believes the team has to continue getting stronger, faster and be more physical each and every day.

Haynes is very excited for the next season to start and to play along side some new faces.

“I’m very excited especially having the new freshmen class coming up as sophomores, I’m excited to see what they have to bring.”

Haynes doesn’t have any expectation for this preseason, instead he wants to work as hard as he possibly can and let it all play out. Haynes realizes that they will have a lot of incoming sophomores and juniors who didn’t play most this past season. He said it will be important to, “hype them up, and get them straight and let them know it’s not going to be that easy.”