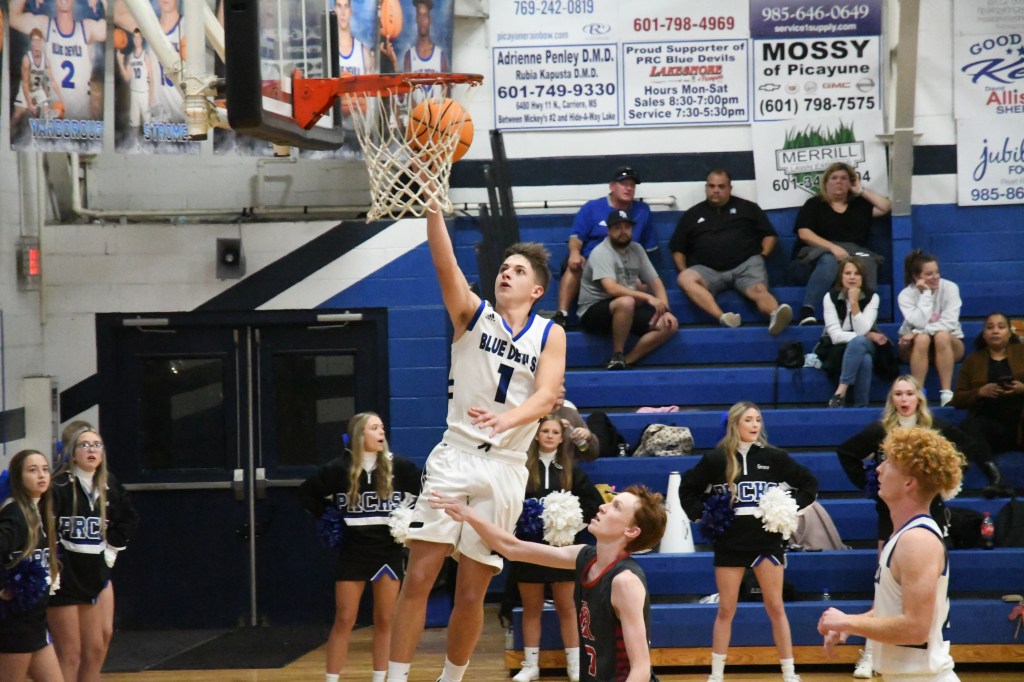 The Pearl River Central Blue Devils (7-1) blew out the Pearl River Rebels 83-34 Tuesday night.
The Blue Devils pressed the Rebels the entire game, leading to steals and easy fast break points for the Blue Devils. The Rebels 2-3 zoned the Blue Devils but it didn’t slow PRC’s effort to rack up a season high 83 points.
“I thought from an execution stand point, handling their zone, we did a really nice job of executing early and getting some easy baskets. I thought our transition was better than some of the other nights we’ve had, maybe the best night we’ve had up to date,” said Head Boys Basketball Coach Scott Stephens.
In the first quarter the Blue Devils jumped to an 11-4 lead. Donnie Ladner made two trips to the free throw line and scored one bucket accounting for five of the team’s 11 points. With less than four minutes remaining in the first quarter, Stephens made a full platoon substitution who finished the quarter well. Xion Lockhart hit the first three of the night and Trevor Stromeyer drove hard for a layup but was fouled. He hit both his free throws to put the Blue Devils up 16-8.
At the end of the first quarter the Blue Devils led 18-11.
In the second quarter, the Blue Devils scored five unanswered points before the Rebels called their first time out. After the timeout break, Heath Brunson knocked down a three assisted by Ladner. Then Ladner picked up a bucket after a Rebels turnover in a full court press. The next possession, Jonathan Hunt found Brunson for back-to-back threes and the Blue Devils led 31-11. The Blue Devils ended the quarter with a 17- 5 run packed with open threes, put back layups and a few and one layups.
The Blue Devils went into the half up 48-16. At the break Ladner had 12 points, Brunson had 10 points and Stromeyer had three assists.
In the third quarter the Blue Devils went up 61-17 after Hunt found Brunson for an open three and shortly after Ladner found Hunt for a fast break layup. The Rebels had a short spark as they hit three jump shots to break past 20 points. With two minutes left, the Blue Devils led 61-23. Payton Cardona knocked down a floater, Lockhart made a layup and Stromeyer found Lockhart for an open three. The sequence pushed the Blue Devils up 68-23. The Rebels answered back with a jumper before the buzzer to end the third quarter.
The Blue Devils led 68-25 to open the final quarter and they ended the game with a 15-9 run over the Rebels.
The Blue Devils had a dominant win, yet Stephens still saw some things that need improving.
“Rebounds are a concern a little bit, staying solid of defense and not gambling as much is a concern, but I was pretty pleased with our effort. I was pleased with our intensity and I thought for the most part tonight was productive for us,” said Stephens.
Next up for the Blue Devils will be an on-the-road game against the Gautier Gators on Dec. 3 at 7:30 p.m.