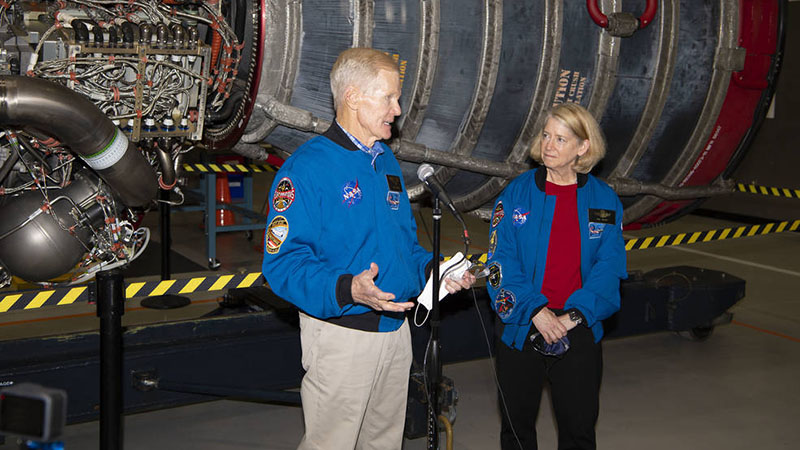 From left, NASA Administrator Bill Nelson and NASA Deputy Administrator Pam Melroy speak to media during the officials’ visit to Stennis Space Center on Dec. 7. Nelson and Melroy both praised Stennis as a “national treasure” during their visit with media at the Aerojet Rocketdyne Engine Assembly Facility on-site. Submitted photo from NASA

The leaders toured the Fred Haise Test Stand, B-2 Test Stand, and E Test Complex, as well as the Aerojet Rocketdyne Engine Assembly Facility, where they were joined by area media for an interview session.

Nelson and Melroy both praised Stennis as a “national treasure,” noting the key role the center is playing in the agency’s Artemis plans to return humans, including the first woman and first person of color to the Moon in preparation for eventual missions to Mars.

“This is an exciting point in our nation’s space history, and a lot of it is happening right here (at Stennis),” Nelson said as he and Melroy visited with media in front of an RS-25 engine at the Aerojet Rocketdyne facility. “Come February, engines like this are going to roar to life, … and we’re going back to the Moon.”

In addition to promoting the U.S. space program, Nelson and Melroy highlighted benefits that both NASA and Stennis would receive under President Biden’s Build Back Better framework, including major improvements to modernize center infrastructure, and funding NASA secured in the recently-passed funding law that will help Stennis repair damage caused by Hurricane Ida.

To close the day, the leaders participated in a ceremony commemorating the March 2020 designation of the A-1 Test Stand at Stennis as the Fred Haise Test Stand. The designation honors Haise, a Biloxi, Mississippi, native, who served as the lunar module pilot on the famed Apollo 13 mission in 1970 and has been a steadfast supporter of the American space program, NASA, Stennis, and the INFINITY Science Center.

During the ceremony, Nelson and others praised Haise as a true American hero. “As long as humans dream of the stars, as long as this nation reaches beyond its bounds, as long as astronauts dare to go, they will dream and reach and go in the shadow of pioneers like Fred W. Haise,” Gilbrech noted.

The visit marked Nelson’s first trip to Stennis since he became NASA administrator in late April.