Wildcats fall to Gulf Coast for first time since 2018-19 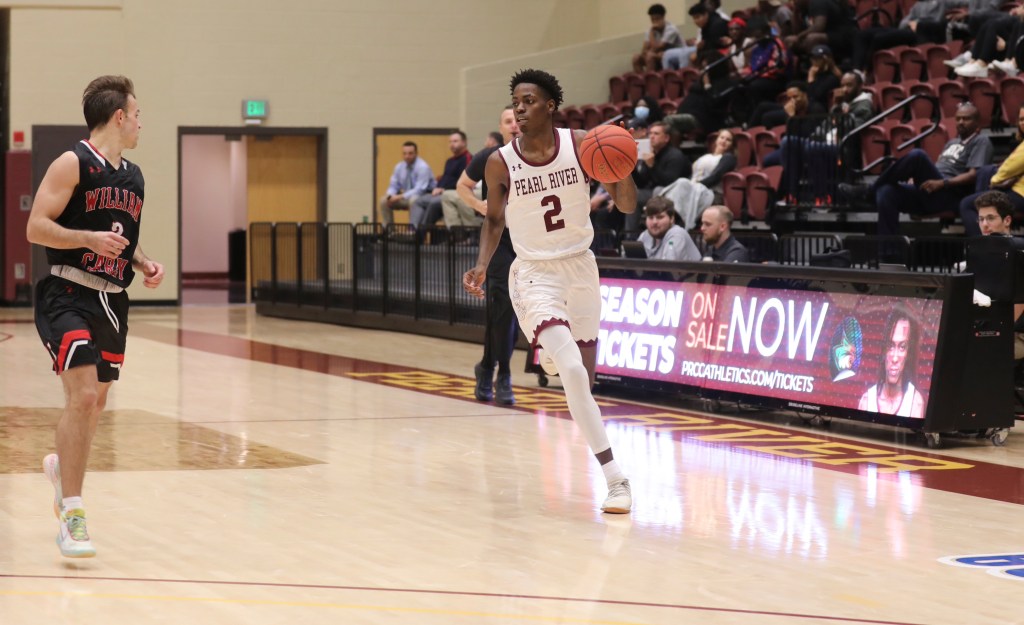 POPLARVILLE, Miss. — It took a buzzer beater and an uncharacteristically sloppy performance from Pearl River for Gulf Coast to pull out a 65-62 win Monday night inside Marvin R. White Coliseum.

FIRST HALF
The Wildcats (3-1 overall) and Bulldogs (5-0) played a thrilling first half inside an electric Marvin R. White Coliseum. The rivals both made runs back and forth throughout a tightly contested 20 minutes.
Trailing 4-3, PRCC went on a 6-0 run aided by a putback from Brison Waller (Cleveland, Ohio; Garfield Heights) and buckets from Dylan Brumfield (Hattiesburg; Oak Grove) and Jair Currie (Albany, N.Y.; St. Thomas More).
MGCCC scored 16 of the next 20 points to build a 20-13 lead.
Not to be outdone, the Wildcats went to work on a run of their own. Jariyon Wilkens (Biloxi) and Cameron Brown (Hattiesburg) combined to make 3 of 4 free throws to break Gulf Coast’s run.
PRCC then proceeded to rip off 14 straight. Brumfield converted a floater in the lane and then J.D. Allen (Brookhaven; Wesson) seamlessly caught a pass in the corner and drained the shot for a 3. Following a bucket in the post by Brown and two more free throws from JaRonn Wilkens (Biloxi), Allen nailed another 3 pointer to prompt MGCCC into calling a timeout with 3:42 remaining in the frame.
The two teams traded baskets over the frame’s final minutes, with PRCC taking a 32-30 lead into the break.

SECOND HALF
Waller opened the second half with a ferocious and-one dunk in a crowd. After a MGCCC free throw, Brown drove the baseline to convert an acrobatic layup for a 37-31 lead.
Following four points by the Bulldogs, Jaronn and Jariyon Wilkens each scored to push PRCC’s lead back out to 41-35.
MGCCC caught fire, nailing four 3-pointers during a 17-2 run to leap ahead 52-43.
The Wildcats once again responded. A Jariyon Wilkens basket in the lane followed by back-to-back 3-pointers from Ankerion Gross (Sardis; North Panola) pulled PRCC within six, 57-51. After another run by the Bulldogs, PRCC scored 11 unanswered to tie the game 62-62.
Jariyon converted a putback and then Gross crashed the basket, caught a pass from Carlous Williams (Hattiesburg; Harrison Central) and scored to pull PRCC within six, 62-55. After MGCCC’s coach was given a technical, PRCC continued its run. Following a Gross free throw, Earl Smith (Jackson; Lanier) drove to the basket for two. Riding the momentum, the Wildcats forced a turnover and JaRonn Wilkens cashed in with a layup.
Following a MGCCC charge call, Smith put back a miss to tie the game 62-62 with 1:42 remaining.
Both teams had chances over the next 1:40, but the Bulldogs went ahead for good in the final 2 seconds on a long-range 3-pointer.

NEXT UP
The Wildcats return to action Saturday with a road game against Southern University-Shreveport. Opening tip is set for 2 p.m.

TUNE IN
All home Pearl River basketball games are livestreamed for free at PRCCMedia.com/gold. Fans who have Roku, Amazon Fire or Apple TV devices can also watch the Wildcat broadcasts by downloading the “Pearl River CC” channel from their app stores.
Games can also be heard on WRJW 1320-AM, 106.9 FM and WRJWRadio.com.