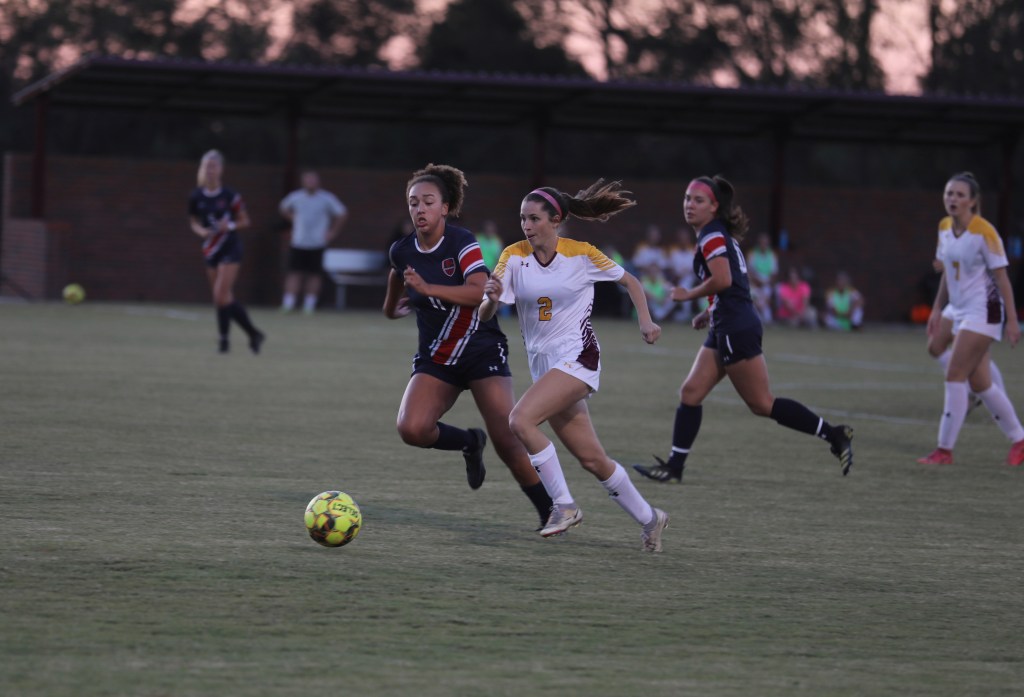 CUTLINE: Sydney Salter (Vancleave) scored twice and assisted on another goal in Pearl River’s 3-1 victory over Itawamba in the MACCC quarterfinals. (PRCCATHLETICS)

POPLARVILLE, Miss. — The Pearl River women’s soccer team used an incredible second half performance Tuesday to complete the comeback against Itawamba, winning 3-1. Just three days after falling to Itawamba in volleyball, Sydney Salter (Vancleave) secured her revenge by getting involved in all three of the Wildcats’ second half goals.

“I really thought they played really well even in the first half,” head coach Henrik Madsen said. “We gave up a goal, but we knew Itawamba was good and we couldn’t give them chances. It was just a matter of can we relax and finish. In the second half the girls took care of business.”

Salter talked about the team’s performance after the game.

“The loss Saturday in volleyball was tough, so this game really meant a lot to me,” she said. “I knew that if we came out and played our best that we could get the win. We knew coming out of halftime that the second half is our best half. The team played great to help us get the win.”

Pearl River (8-5-2) had a chance on a corner kick in the 12th minute of the night. Erin Clifford (Ocean Springs) sent a ball in, finding a Wildcat forward. The ball was connected with, but it rolled out of bounds.

Itawamba (5-9) grabbed the first goal of the night in the 24th minute. A shot on goal was deflected by the diving Aníta Guðmundsdóttir (Kópavogur, Iceland.; Flensborg), but the ball found its way back to another player who smacked it home.

Despite spending the majority of the half on the Indians side of the field, the Wildcats were unable to find an equalizer as they entered the break trailing 1-0.

Right out of the half, the Wildcats developed a good attacking chance, moving the ball into the box of Itawamba. Katie Havard (Hurley; East Central) found the ball and tried to find the top of the net but sent her shot just high.

Salter stepped up to take the spot to take the penalty kick and swiftly slotted it home past the diving keeper, tying the game up 1-1 in the 50th minute.

Pearl River took the lead in the 62nd minute on a beautiful shot from Aubrie Edwards (Biloxi). Guðmundsdóttir booted a ball forward and Salter jumped high above the defense to head the ball to Edwards who was headed for goal. Edwards took a few steps forward and smashed it home at the near post to give the Wildcats a 2-1 lead.

“It was something that we’ve talked about,” Madsen said. “Anita can ping it in and Sydney is really good in the air. If they just time their runs right, then that can be the outcome. Aubrie finally timed the run right and had a nice finish.”

“We’ve been working on a goal like this,” Edwards said. “It was such a great feeling to be able to finally do it.”

Just four minutes later in the 66th minute, Salter found the back of the net once again. After the Wildcats earned another penalty kick, Salter smacked a shot, but the ICC keeper deflected the ball back out. Salter found the rebound and this time put it into the net to give Pearl River a 3-1 lead.

The 3-1 advantage held as the Wildcats advanced to the MACCC semifinals.

UP NEXT
The Wildcats return to action Saturday in the MACCC semifinals. The match against Holmes will begin at 11 a.m.