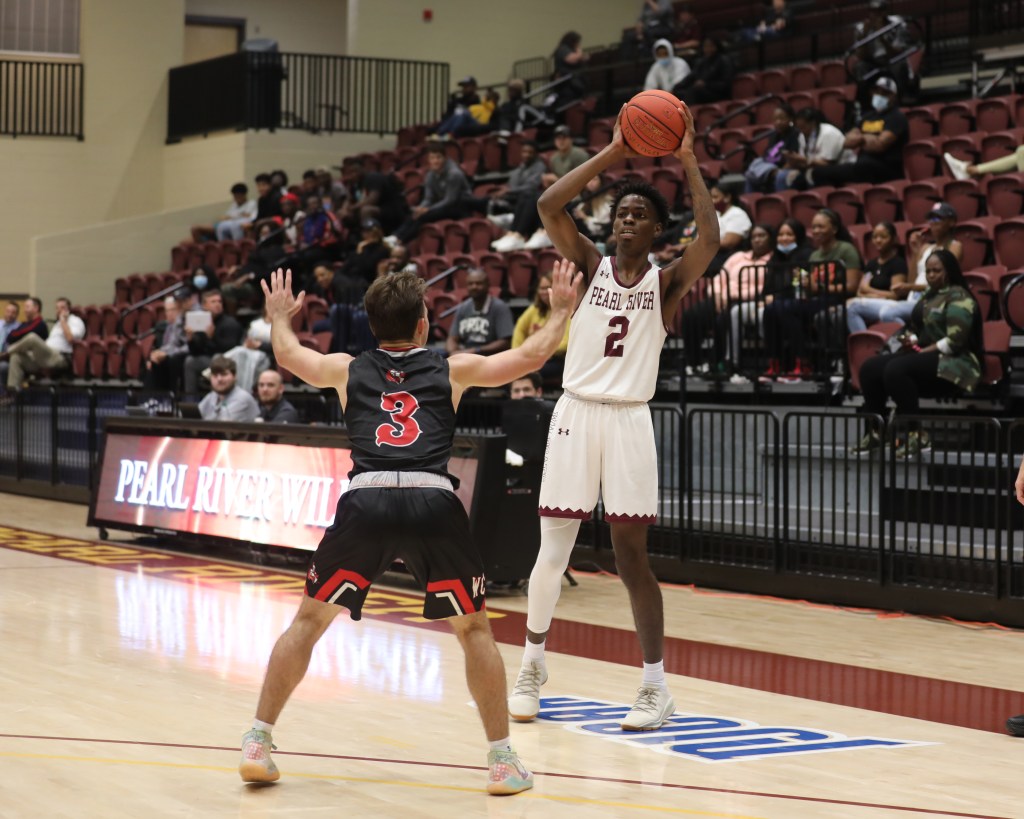 “We actually got off to a better start than I thought we would,” Pearl River head coach Chris Oney said. “We kind of took it to them and had things rolling. It’s not all our guy’s fault. I’m still trying to learn how to sub these guys and what combinations work good together. Luckily for us, our defense was good again. Our defense was strong. They were spreading us out, but we were able to keep them still by going to a matchup zone.”

FIRST HALF
Pearl River was off and running to start the game, picking up three points in less than 40 seconds. Jariyon Wilkens (Biloxi) was fouled and converted one of his two free throws.

Just a few seconds later, he found Brison Waller (Cleveland, Ohio; Garfield Heights) in the paint for an easy layup.

After a few more baskets, the Wildcats found themselves up 11-7.

The next play saw Baton Rouge (0-2) have an open look around the basket, but JaRonn Wilkens (Biloxi) jumped and swatted it out of the air for the block. The Bears rebounded the ball, but Cameron Brown (Hattiesburg) was nearby and stole it out of a Baton Rouge player’s hand. Brown then dashed down the court for an easy layup to make the score 13-7.

JaRonn Wilkens converted an old-fashioned 3-pointer shortly after to make the score 16-7.

The Wildcats pushed their lead out to 10 points at the 9:51 mark as Jair Currie (Albany, N.Y.; St. Thomas More) drove into the lane, fought through some contact, and laid the ball into the basket to make the score 20-10.

The next two Wildcat points came on a thunderous dunk from Waller. The 6-foot-9 center hauled in an offensive rebound and immediately threw down the two-handed slam, making the score 22-10 in the process.

PRCC pushed its first half lead out to 31-14 after JaRonn Wilkens missed a basket but rebounded his shot and put it back in the net.

Carlous Williams (Hattiesburg; Harrison Central) got on the score sheet for the first time with 2:14 remaining on the clock. The forward grabbed a rebound before passing the ball off to Earl Smith, Jr (Jackson; Lanier) who then found Williams in the paint for an easy layup. The score made the Pearl River lead 39-21.

The Wildcats eventually took a 41-25 lead into the break.

SECOND HALF
The Wildcats took the first two points of the second half, getting two free throws from Waller, but it was all Bears after that as they went on a 9-2 run to cut the deficit to just nine points.

Pearl River didn’t let the momentum swing affect it as it pushed back out front 49-34 near the 16-minute mark.

With 10:39 left in the game, Brown blocked a BRCC shot off the backboard that Williams rebounded. He quickly passed to Smith who threw the ball downcourt to Alex Jordan (Hattiesburg) for a layup to make the score 55-39.

The Wildcats grew their lead out to 17 points at 60-43 when Waller plucked a ball away from a BRCC forward in the post and tossed it to J.D. Allen (Brookhaven; Wesson) who dashed down the court for a basket.

With under four minutes left to play, Currie sunk two free throws to give the Wildcats a 20-point lead at 68-48.

Baton Rouge fought to try to make it close in the dying minutes of the game, but Pearl River closed it out with an 8-2 run to win 74-59.

BY THE NUMBERS
Jariyon Wilkens had an incredible night, finishing with 11 points, seven assists, six rebounds, and five steals. His brother, JaRonn, led the team in scoring with 19 points. Brown chipped in 11 points as well. Waller also finished in double figures, adding 10 points.

Smith hauled in seven rebounds to lead the team and the Wilkens’ each had six.

Smith and Currie were second and third in assists with six and four, respectively.

Pearl River returns to action next Thursday as it travels to Baton Rouge to take on the Bears at their place. The game is set to begin at 7 p.m.