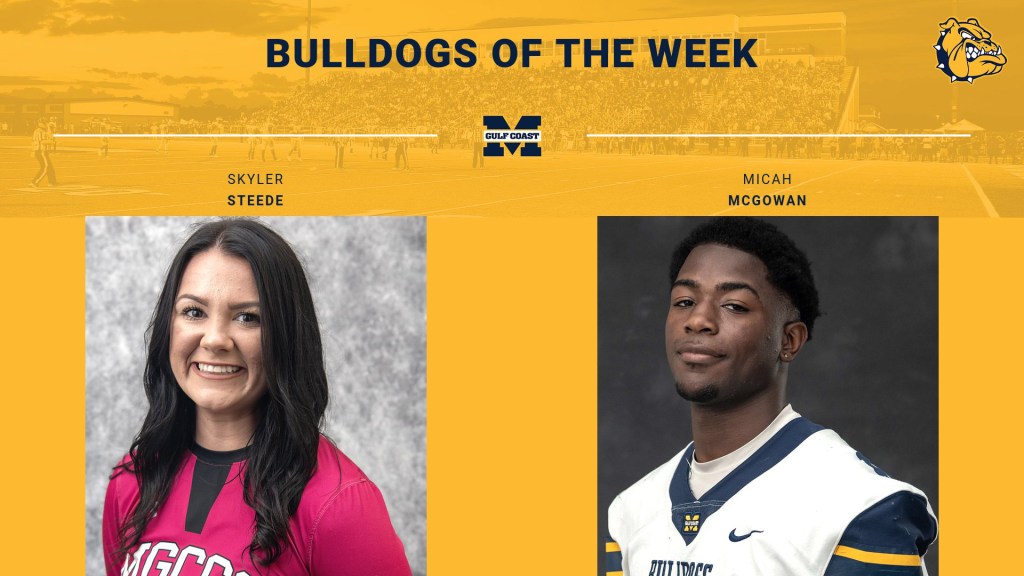 PERKINSTON — Skyler Steede and Micah McGowan have been named Bulldogs of the Week for Oct. 25-31.
Steede, a sophomore keeper from Lucedale, stopped all 4 shots she faced in a scoreless draw against Pearl River.
McGowan, a sophomore running back from Petal, had 176 total yards and 2 touchdowns in Mississippi Gulf Coast’s 52-6 win over Southwest Mississippi.
He ran 19 times for 155 yards and two scores, and caught two passes for 21 yards
Also nominated:
Zach Seymour, a sophomore from Gulfport, had 6 saves in No. 13 Gulf Coast’s scoreless draw against No. 3 Pearl River. The result clinched the two-seed in the South Division.
Keymari Odum, a freshman wide receiver from Haines City, Fla., returned two kickoffs for a total of 102 yards. His long was 57 yards. Pressed into duty as a running back, he also gained 127 yards on 13 carries with a touchdown and caught 2 passes for 14 yards.
Deven Wright, a sophomore defensive lineman from Clarksdale, had two sacks and five total tackles in Mississippi Gulf Coast’s 52-6 win over Southwest Mississippi. He also broke up a pass.
For more information on MGCCC’s 10 intercollegiate athletic teams, follow @MGCCCBulldogs on Twitter and MGCCCBulldogs on Facebook, and go to mgcccbulldogs.com.