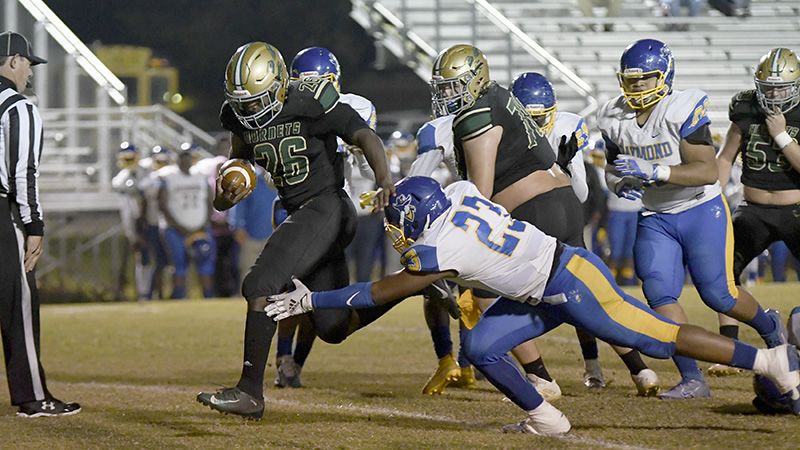 Poplarville’s DJ Richardbey stiff arms a Rangers defender and picks up a first down during Friday night’s win over Raymond. Photo by David Thornton Jr.

The Poplarville Hornets closed out the first round of the 4A region 7 2021 State Championship playoffs with a 42-7 win over the Raymond Rangers.

The Hornets stung the Rangers early as Quan Huderson returned the opening kick 85-yards for a touchdown. The PAT by Zack Carpenter put the Hornets lead to 7-0.

The Hornets found the endzone again in the second quarter through eight plays for 70-yards, with a 32-yard touchdown run by Avan Jarvis. The Hornets led 14-0 with 10:20 left in the quarter. The Hornets scored the third touchdown of the half with 5:06 minutes left in the first half five plays spanning 88-yards. The touchdown play came from Maurice Travis who ran a long 75-yards and put the Hornets up 21-0 going into halftime.

The Rangers received the ball after the break but the Hornets stole the ball back when Mark Will caught an interception, putting the Hornets offense on their 17-yard line. Four plays later, the Hornets found pay dirt when DJ Richardbey ran in a 13-yard touchdown. The play and the PAT extended Poplarville’s lead to 28-0.

The next Hornets possession ended quick when quarterback Narada McGill completed a pass to a wide-open Lawrence Jamison for a 45-yard touchdown. The Hornets’ lead increased to 35-0 with 7:50 left in the third.

The Rangers didn’t go down quietly, in the following kick off Catrell Hilton ran 95-yards for the Rangers’ solo score of the night. Decortavius Carver’s PAT was put the score at 35-7 with seven minutes left. The Hornets next defensive opportunity ended just the same as the last, but it was Benny Jarvis Jr. who came up with the defensive interception for the Hornets. The Hornets then started their drive on the 32-yard line and in three plays scored the final touchdown of the night when Maurice Travis carried the ball 2 yards into the end zone, putting the final at 42-7 with Carpenter’s PAT.

The Hornets will now move to round two against the winner of Moss Point vs. North Jones. The next game will be Nov. 12 at 7 p.m.